About 48 months after picking up the S4 Avant from a fellow Audi enthusiast they contacted me offering to buy the Avant back if I ever was thinking of selling it.

As it turned out I had not been driving it very much.  I’d picked up a Mk7 GTI as a daily driver to replace my Miata.  The Mk7 GTI is very similar to the S4 with respect to exterior dimensions and comes in a few hundred pounds less weight.

The turbo engine and abundance of aftermarket parts options were another bonus, offering the opportunity to test with a different platform.

The opportunity to return the Avant to the previous owner made the decision to see it off easier to make.

First though there would be a final turbo swap, removing the Frankenturbo F21 v3’s for a pair of TiAL 605s’.

Knowing this would likely be the last time I was removing a 2.7T engine made it a bit easier to undertake what is probably the dozenth engine pull I’ve worked through.

Swapping turbos to the TiAL 605.

The engine only has about 50k on it, but having it out I took the opportunity to replace a few coolant hoses that have been in use for a number of years.

Back in it goes.

With the Avant back with the prior owner and the GTI a family favorite daily driver a replacement project car was needed.  The Mk7 Golf R was what I settled on.  Similar to the B5 S4 but with enough differences to launch a new round of tests at MyGolfMk7.com 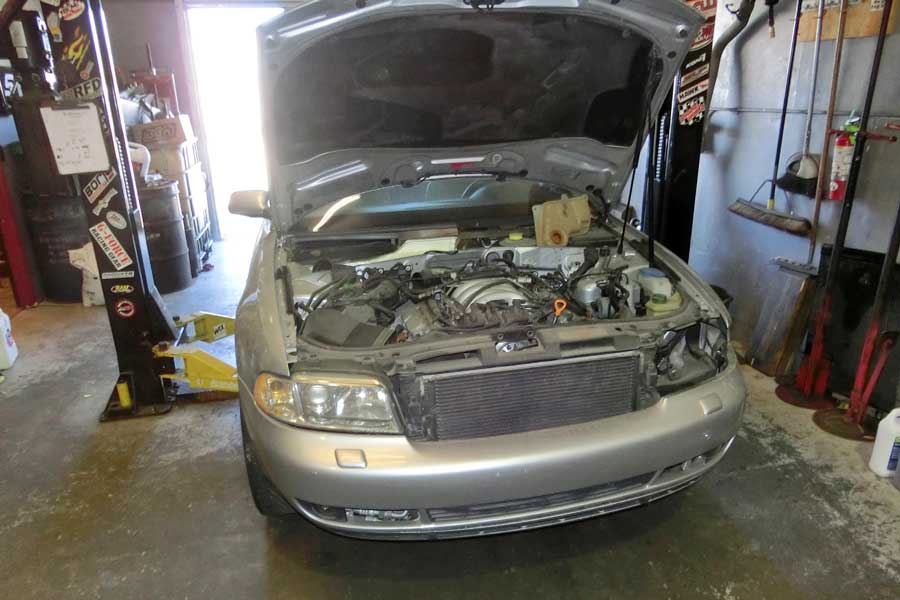 I was lucky that the car was located at a shop and they had prepositioned it on their lift if raising became necessary. 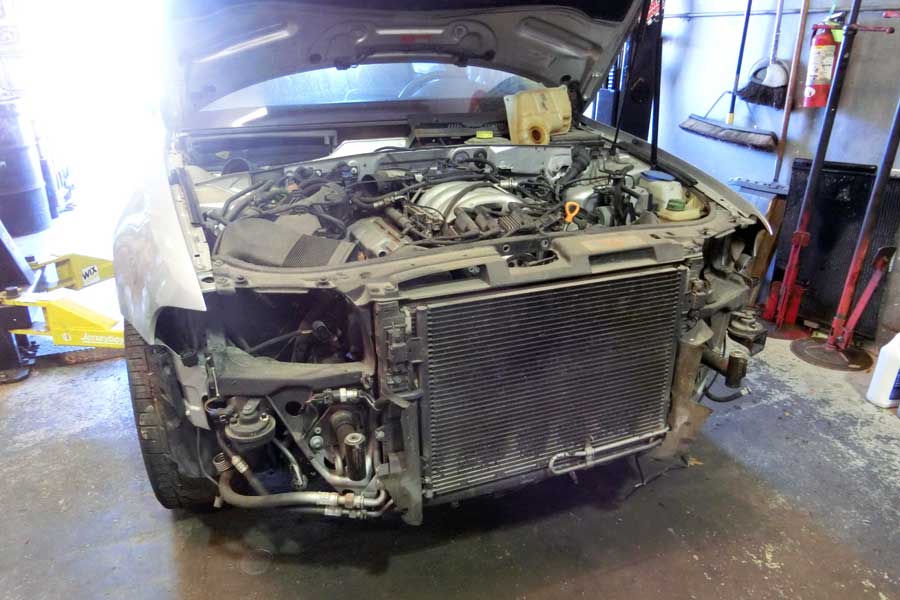 As it turned out I didn’t ‘need’ to have it raised, though I did bring it up to loosen the AC compressor.  I then returned it to the floor since that’s the angle I’m accustomed to working on these things from. 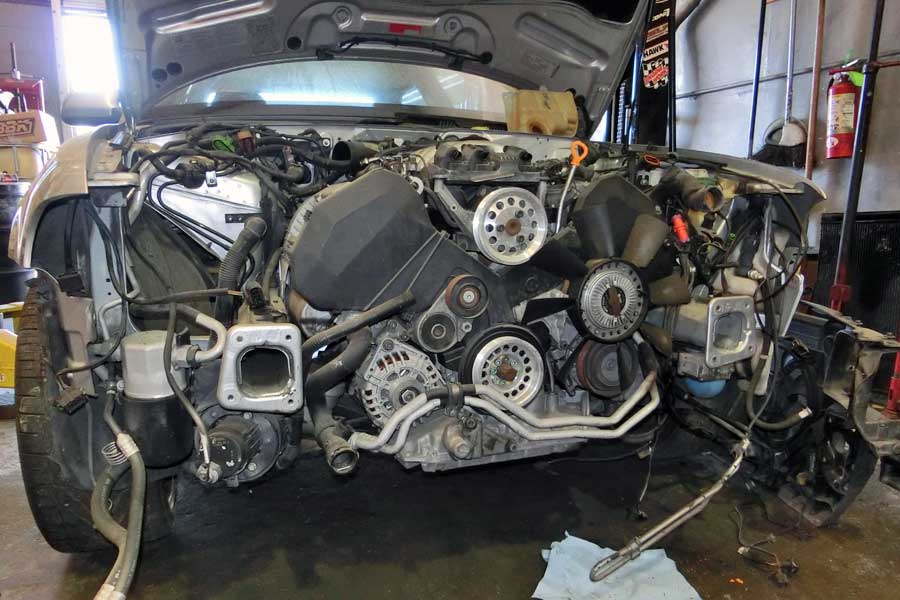 The front came off relatively quickly since the last time it had been installed it wasn’t a complete lock down. 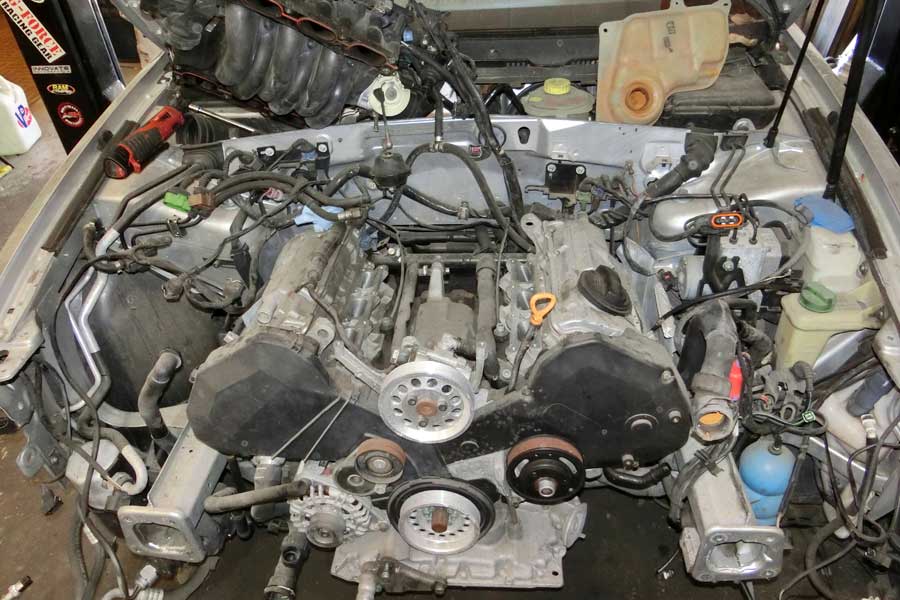 The 2.8 intake manifold had me stumped a bit trying to determine what needed to be unhooked and what could stay.  In the end I decided it would be easier to just lift off the entire intake manifold with most everything attached to it still in place. 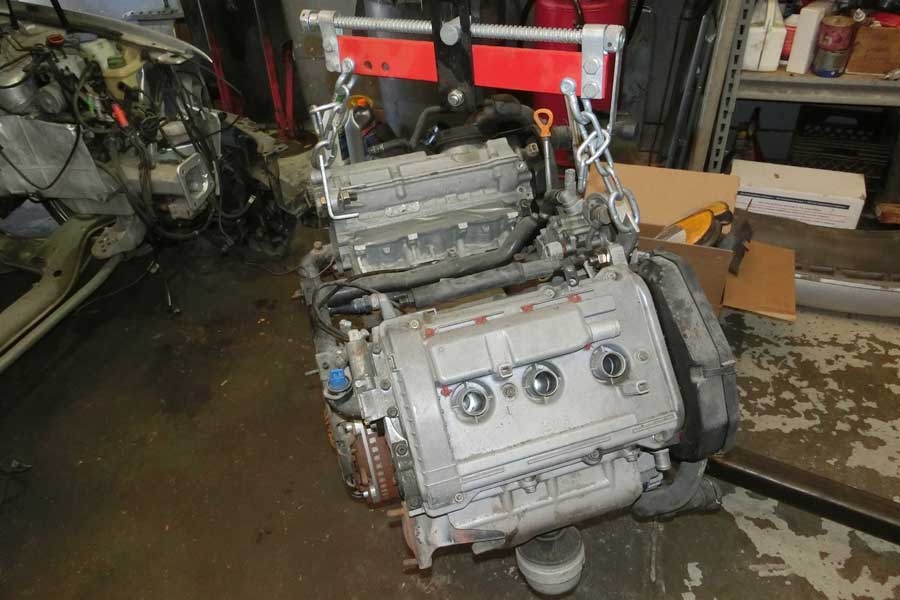 It took about an hour, but the engine came out without any problems. 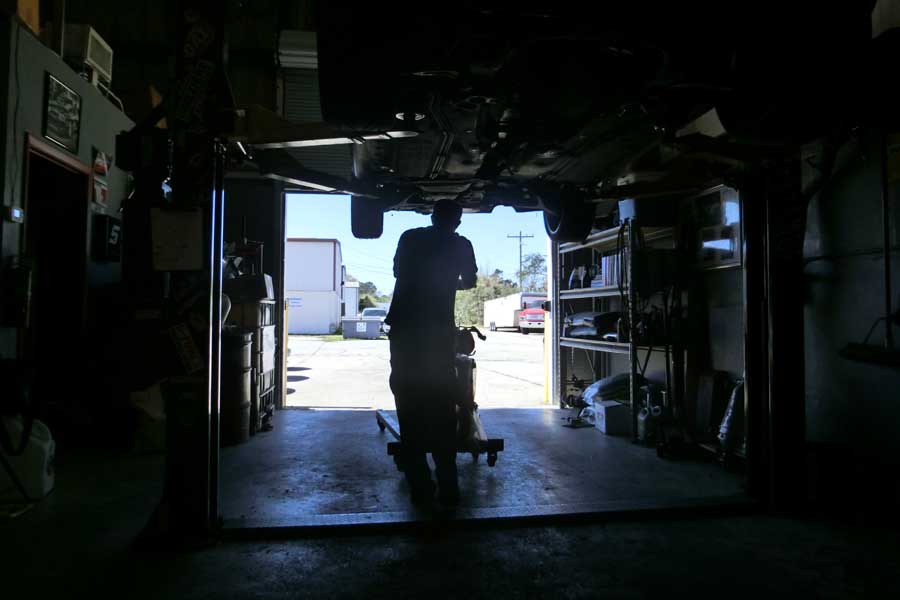 Then it was on to wheeling it out underneath the A4 to the waiting U-Haul trailer. 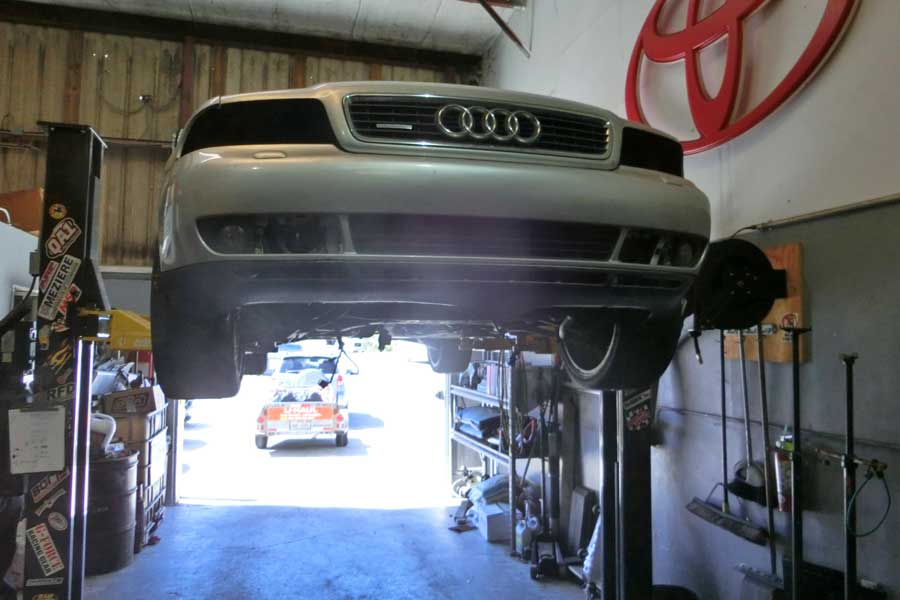 The A4’s future is unknown, but it looks like it would be a good candidate for a track car, it is in remarkably good condition for its age, probably due in large part to being parked in north Florida for the past decade or so. 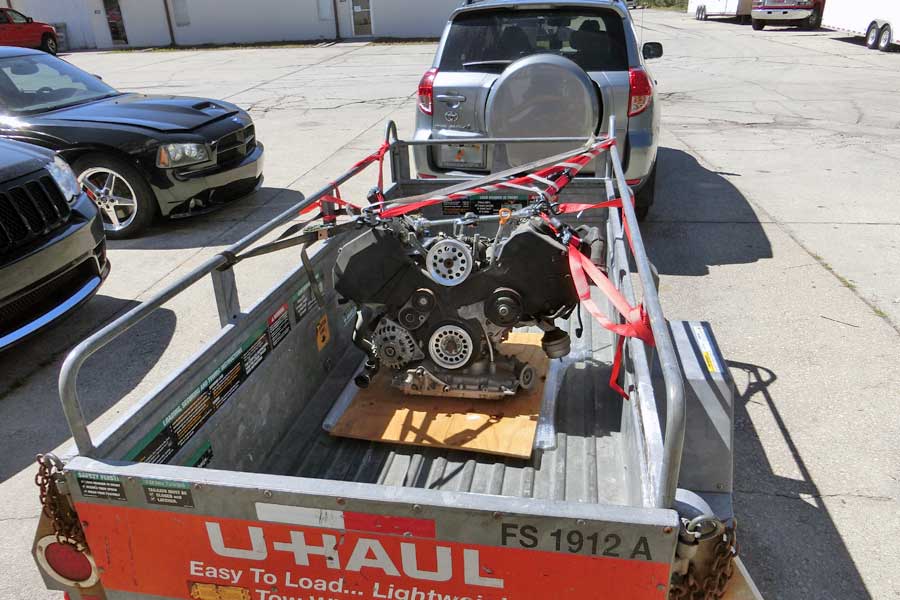 Strapped down and reading for the journey to its new home a little further south. 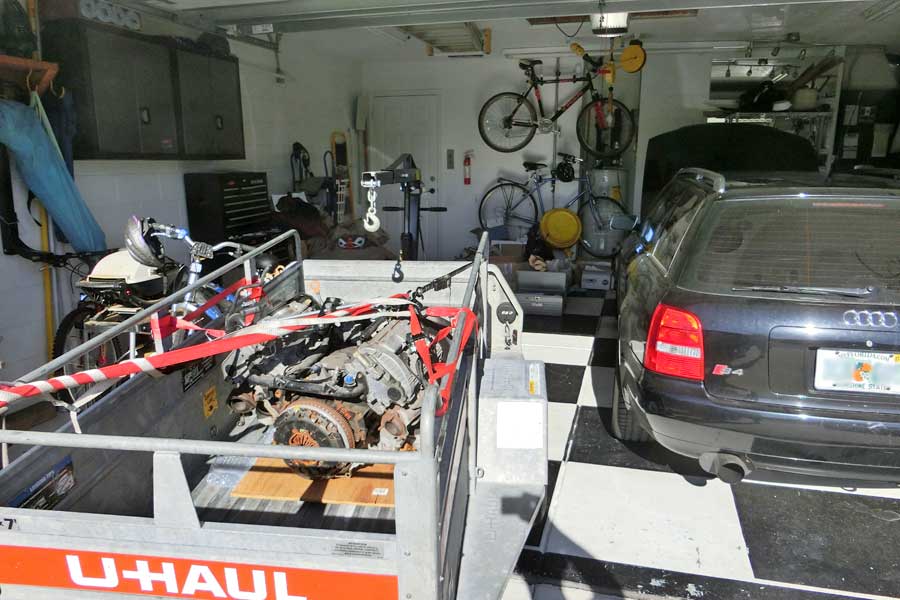 Arriving at my garage with the S4 it will be placed in parked to the right. 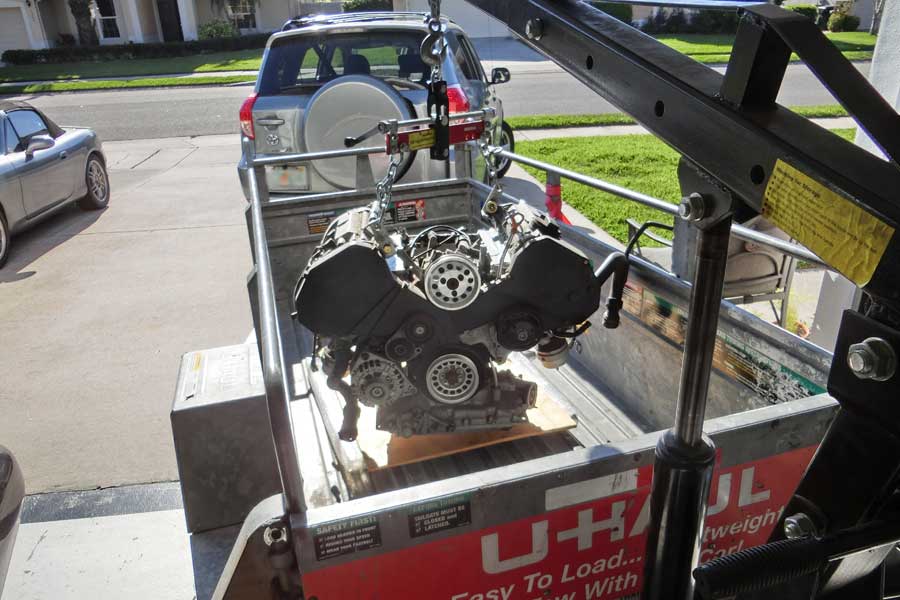 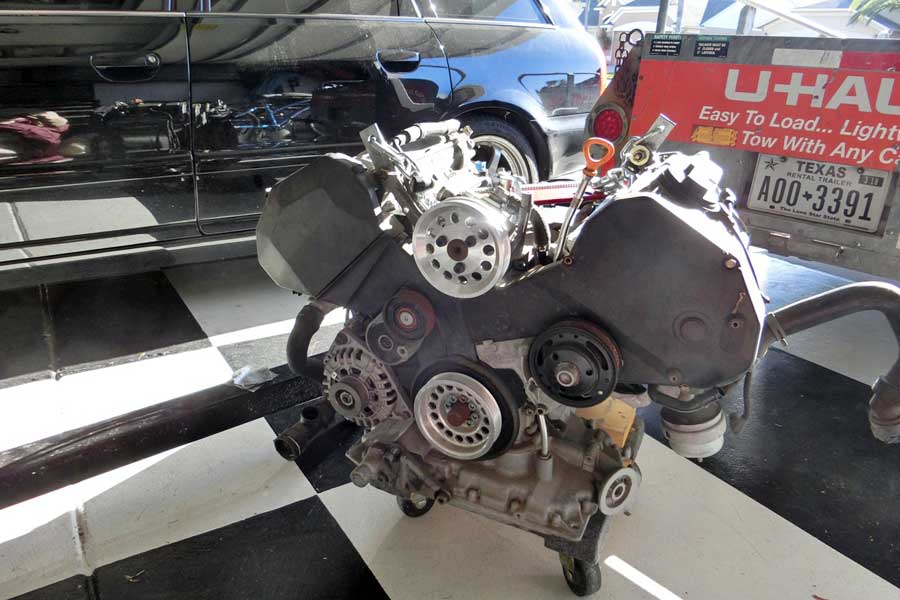 On a furniture dolly so I can easily wheel it about the garage for working on it.