I did some additional testing (see here for round one of this series of tests) of the affect of shrouds on the intercooler’s performance after obtaining a set of Evolution Racewerks side mount intercoolers.  I did not purchase the shrouds right away so for a month I drove without shrouds and collected temperature data.

This chart illustrates the drop in temperature from the peak, typically occurring prior to exiting the tunnel and accelerating, to the point in time at which the temperature drop rate began to bottom out, or in other words the intake air temperature was no longer dropping very much relative to the previous rate. 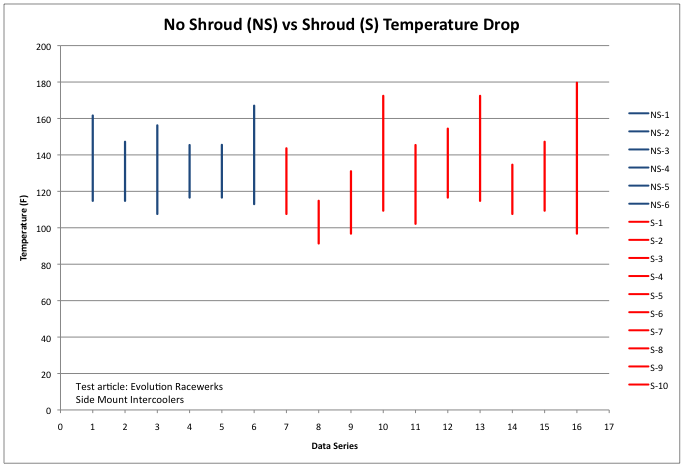 This next chart shows the drop amounts aggregated.  Below the chart is the data table used to create the chart. 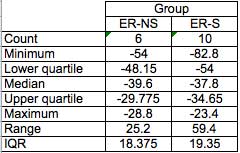 The final chart shows the comparison of the rate of change in temperature accounting for the period of time over which the drop occurred.  If the shrouds allowed the intercoolers to cool off more quickly the rate of change of temperature should be greater.  The point of illustrating the data in this way is to avoid putting too much weight on the overall temperature drop.  It could be argued that with sufficient time a shroud-less intercooler could reach the same steady state temperature as as shrouded intercooler, but it would be more desirable to cool the intercooler quickly, this result factors in the time it takes to cool the intake air.

Again, the table of results used to create the chart is also shown. 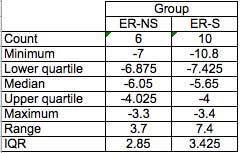 It is hard to write-off shrouds as not worth having when they’re in wide use on many vehicles and the principle behind how they function is sound.  So why the lack of difference in these tests?  One explanation could be that the test is recording intake air temperatures which is not a direct reading of the intercooler core temperature.  If the intercooler core temperature had been measured it’s possible it would have shown more of a difference between the two cases.

Another possibility has to do with the size of this particular intercooler core.  It is a very large intercooler and occupies most of the space available to it.  There is little space for air to pass around the core so the air would flow through the core whether the shrouds were in place or not.

Finally, this test just looked at one specific situation and there could be others where the addition of the shroud caused more of a difference in comparison to the shroud-less case.

In case two test aren’t enough… read on for even more shroud testing with AMD’s intercoolers.