Making the case for the FrankenTurbo

After driving my S4 with an EPL tuned 605 kit for almost 6 months I decided the less responsive low end pull, as compared to the K04 setup I’d had previously, and what I felt was a significant performance drop in higher temperatures, were reasons to consider other options.

FrankenTurbo (FT) was just introducing the F4H-BT for the 2.7T motor and was looking for some beta testers.  With aspirations to spool like K03’s and top end like the RS6 turbo the FT appeared to be aiming at just the performance characteristics I was looking for.  Always interested in testing a new product, and desiring to get back to a quick spooling turbo, I made the decision to remove the 605’s for the untested F4H’s.

Response to this decision was often bewilderment: 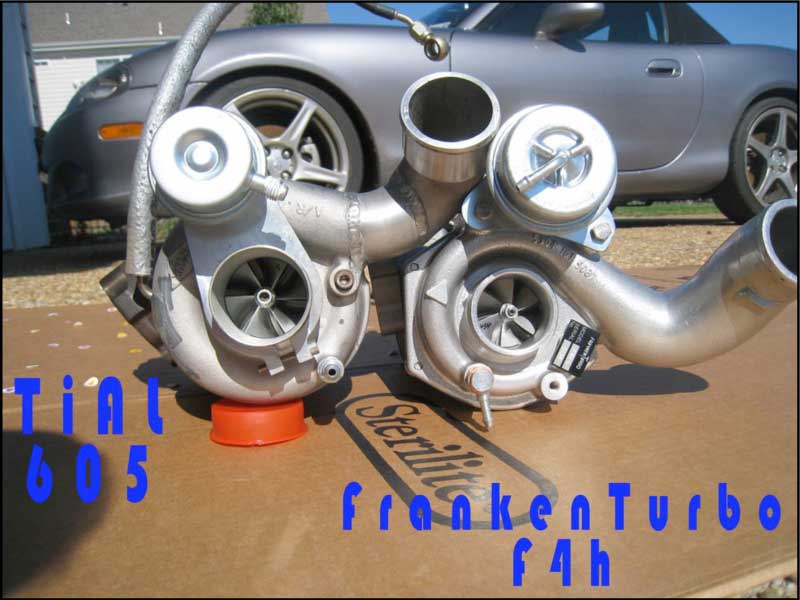 As a member of the beta test group my intent was to evaluate the F4H turbo against the vendor’s goals, and as an S4 owner making a significant change, to assess the performance against the previously installed 605 turbo system.

The evolution to get to the point where I could make such an assessment involved initially working with VAST Performance, which proved to be a disastrous decision that was costly and time consuming and netted me nothing but aggravation and a complete disdain for the owner and management at VAST.  That whole debacle will be documented later.

I returned to a tuner I could trust and with whom I’d had prior experience, EPL.  This move proved beneficial in numerous ways, the most relevant to this analysis being that the supporting hardware on the car would be identical to what was in place during the time that the 605 turbo’s were installed.

The vehicle configuration is critical to the results obtained and it should be pointed out that the results could vary substantially from what I have observed if different components were mounted on the vehicle.  For instance, the addition of a water/methanol injection system could have altered the results, and a more significant upgrade such as aftermarket connecting rods would certainly have led to different results.

For this comparison it is important to understand the conditions I was evaluating, those were, a stock 2.7T motor with no water/methanol injection system and typical aftermarket intake and exhaust components.  These consisted of: 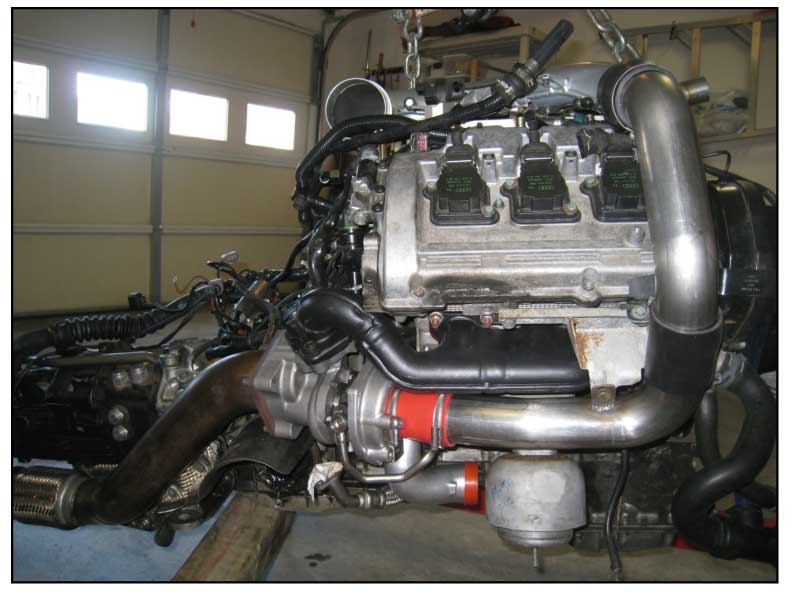 Unfortunately I lack appropriate logs from my car when it had K03’s to be able to make a direct comparison.  I do have a number of logs from when my car was equipped with K04’s and from that comparison it should be possible to conclude if it is likely that the F4H will spool up like a K03 turbocharger. 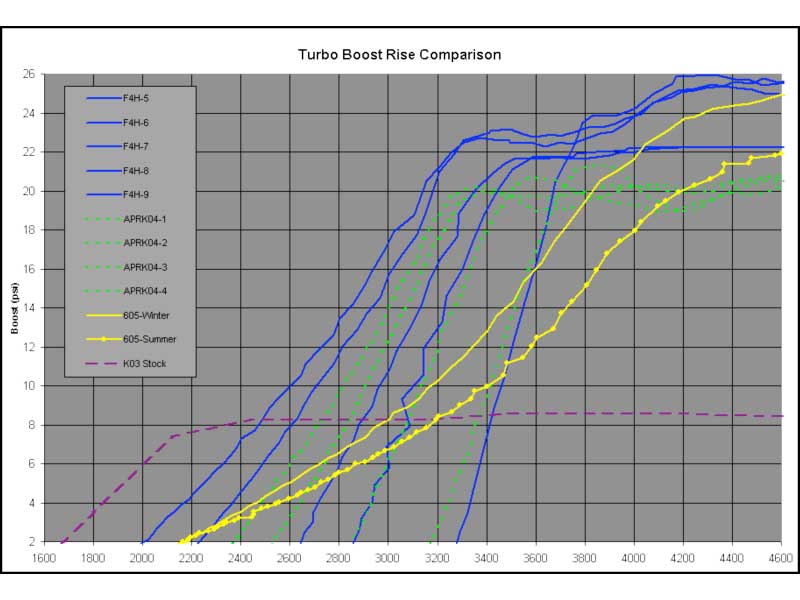 A set of data from the 605 turbo’s is included for comparison.  Not surprisingly the F4H spools-up more quickly.
Goal 2: Top end like a RS6

This assessment was more difficult to make due to a few reasons.  First was an interest on my part not to push the F4H turbocharger past a perceived safe operating level.  Being a new product without much information to go on this safe level was somewhat arbitrary.

Second was a shortage of information about the RS6 turbo boost and airflow on my part.

With the TiAL 605’s being fairly similar to the RS6, and the abundance of information I had on the 605’s, I decided to assess the F4H against the 605.

Below is a chart showing the comparative boost profile of the F4H and 605 with ambient temps and intake air temperatures within 5 degrees for each data set.  The result is not surprising, the F4H holds higher boost earlier, resulting from the quicker spooling nature of the turbo, and the 605 has higher boost toward the upper rpm region.  To reiterate the point that was made before, with additional hardware it is certain that this comparison would look different. 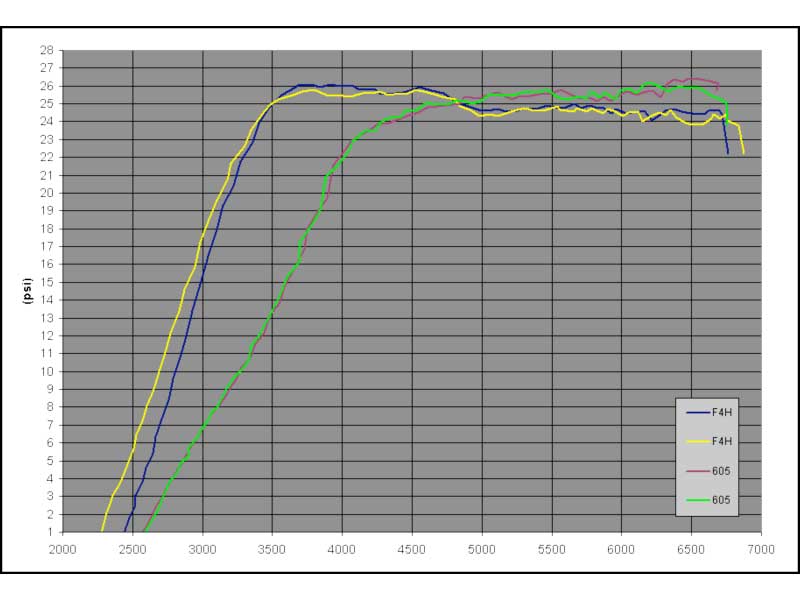 In terms of airflow, both turbo’s are capable of achieving flow rates that exceed the stock sensor limit in an 85mm housing.  A calculation is made based upon intake air temperature, manifold air pressure, engine speed, and estimated volumetric efficiency to predict the airflow in cases where MAF sensor values are unavailable or the sensor reading is scaled such that a direct comparison is not possible.  The sensor reading and calculated airflow values are shown below for each turbo in the boost case shown above. 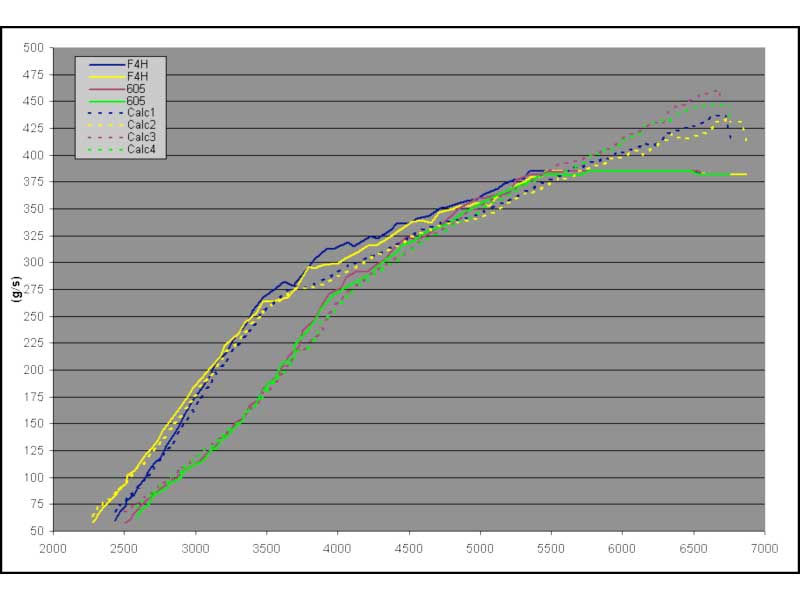 As would be expected from the boost profile, the F4H is moving more air at lower rpm’s and the 605 more air at higher rpm’s.

During the process of settling upon a boost profile for the F4H that I felt comfortable with, there was effort made to operate the F4H at a higher boost level.  This result is shown below.  While I was not comfortable operating the turbo at this level of boost and airflow, there was no indication that it could not be operated at this level, or possibly higher. 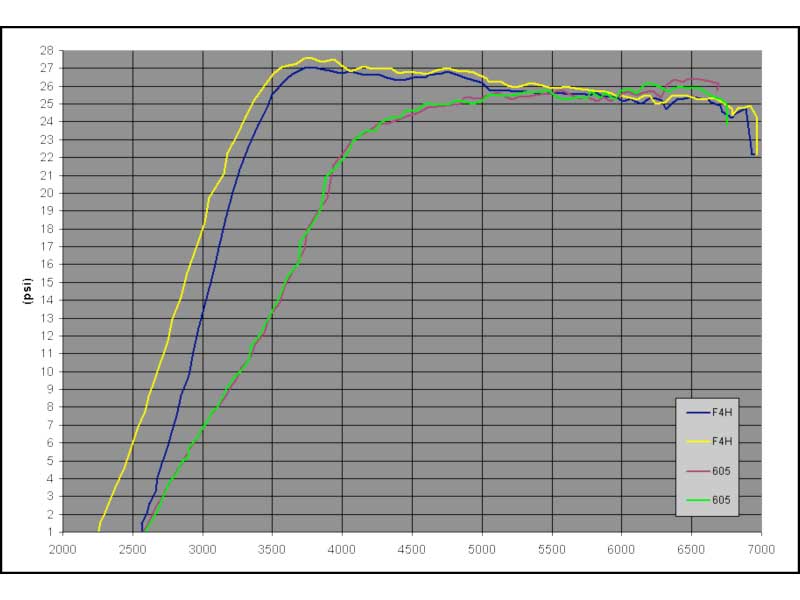 As to the question of the F4H having a top end like the RS6, that question has to be weighed in the context of the other performance systems involved.  It’s almost certain that with additional engine capacity, whether through water/methanol injection, or upgraded motor components, the RS6 turbo would outperform the F4H in terms of top capacity.  But with the stock engine being a limiting factor, the F4H does seem capable of coming close to equaling RS6 levels of performance.

Where this question gets settled ultimately is on the road, with how the vehicle performs with each of these turbochargers.

During the experience of on road logging I realized one of my reasons for abandoning the 605’s was flawed.  I had felt that the 605’s suffered a significant performance penalty as the outside temperatures rose.  This was the case, but over the course of tuning the F4H’s it became apparent that they too were heavily influenced by the ambient air temperatures.  Reviewing the results from each of these setups, along with my previous APR K04 hardware, it was evident that the K04 setup didn’t exhibit a similar sensitivity as shown below. 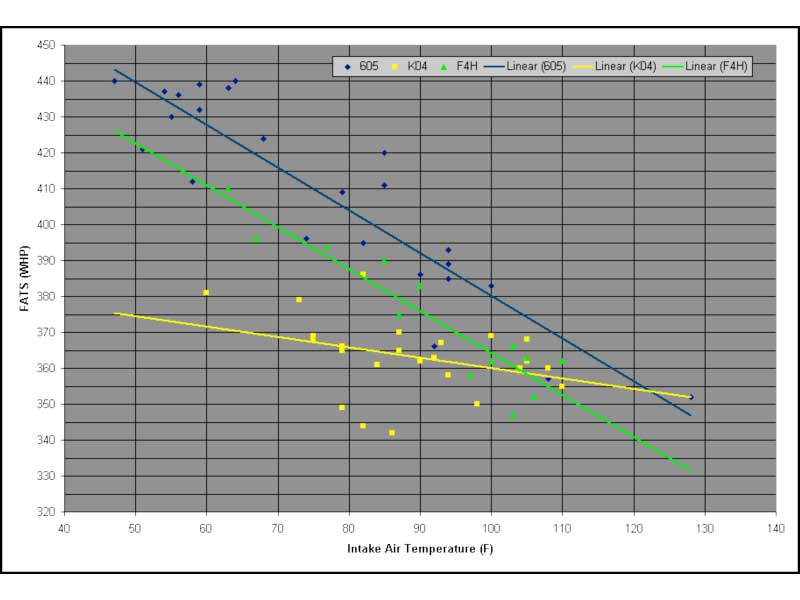 I’ve concluded that the relative insensitivity of the K04 turbocharger was more a product of the tuning and not the turbocharger itself.  APR did not push the K04 to a level of performance that is more common of late, and thus by operating more conservatively the system did not react as strongly to higher temperature conditions. 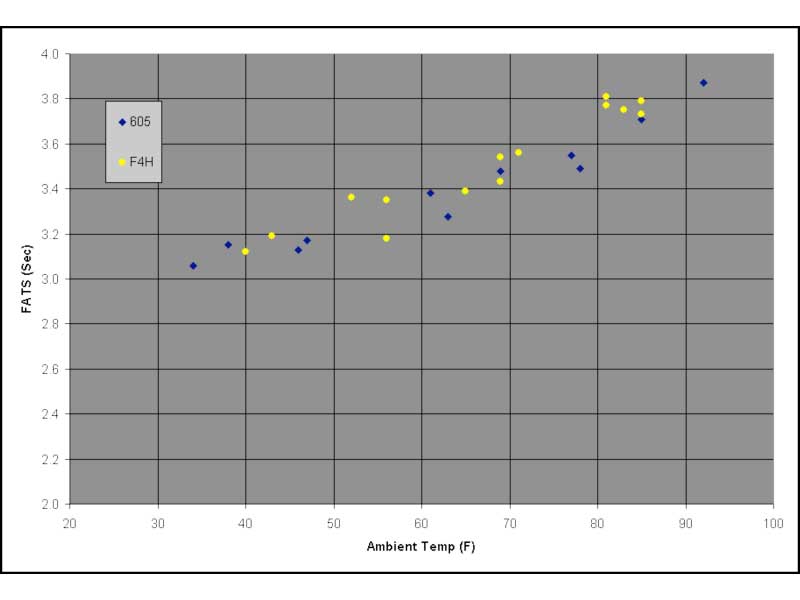 It is apparent that the F4H and 605 react very similarly to changing temperature conditions with performance increasing as ambient temperature drops.

Evaluating the two under the best case conditions results in the following comparison of acceleration.  Not surprisingly the F4H produces significantly more torque at the lower rpm end, and the 605 more horsepower toward the upper rpm end. 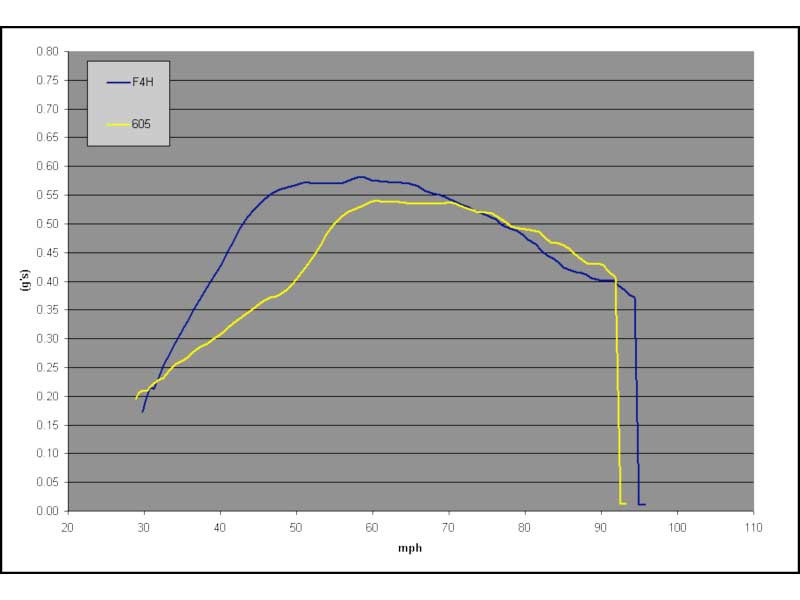 But, but, but…  for the benefit of the people who are saying that right now, here below is what you want to point out.  This is the comparison when I used 100 octane fuel with the 605’s.  I’ve not had the F4H tuned for that octane and likely won’t.  Clearly as I stated before, there are other things that could be done to change the vehicles performance that could possibly alter the outcome dramatically.  What might the comparison be like if each were on 100 octane is a question that I will not be answering. 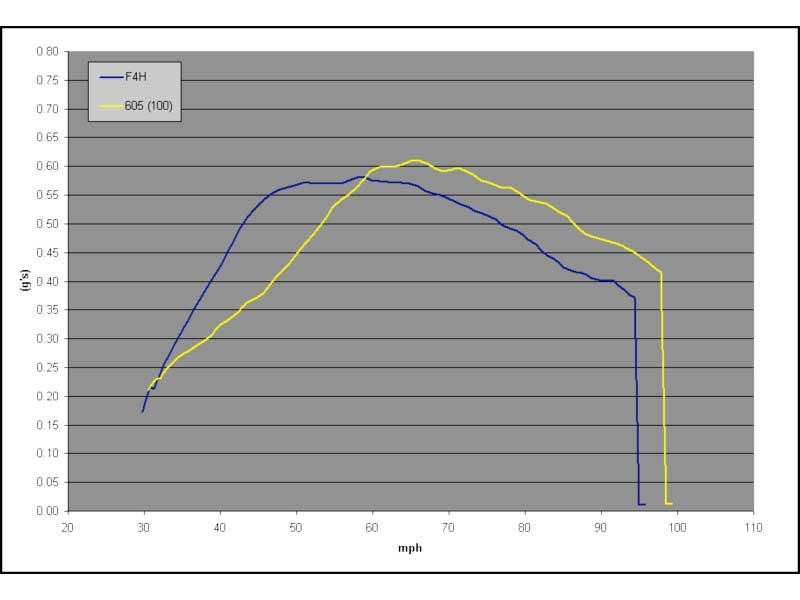 A point that needs to be considered when selecting a turbocharger, whether it is one of these two options, or something else, is that the vehicle operator has conditions, constraints, and preferences that all need to be weighed when deciding on the product to use.  Budgets vary dramatically, some people use the car at a track while others exclusively commute in town, and finding a suitable solution for one person does not mean the same solution will work for somebody else.  There is no easy answer to the question of what turbocharger system to select.

After having driven my car with each of these turbochargers for an extended length of time in various situations I know I would be happy with either one.  For my current situation and preferences I’m glad to have the F4H on the car since the turbo is better suited to how I currently operate my car.  What would I think if I were using water/methanol injection?  How would I feel if I drove with 100 octane more often?  How about an E85 tune?  What if I built the motor, what then?  All of those questions have crossed my mind and the short answer is that I don’t know how I would decide then.

The charts in this report should give some idea of how these two options compare, but they can’t answer the question of how well the Franketurbo F4H or TiAL 605 would fulfill a particular owner’s unique set of requirements.