The last thing for me to do was assess if the car was running well. Before taking the car in for the Stage III installation I had put the stock ECU in and had a dyno session where three pulls were made to gauge the car in near-stock form. Aside from AWE downpipes and the Supersprint exhaust the car was stock for these pulls. The results of this stock session are here and shown in the chart below: 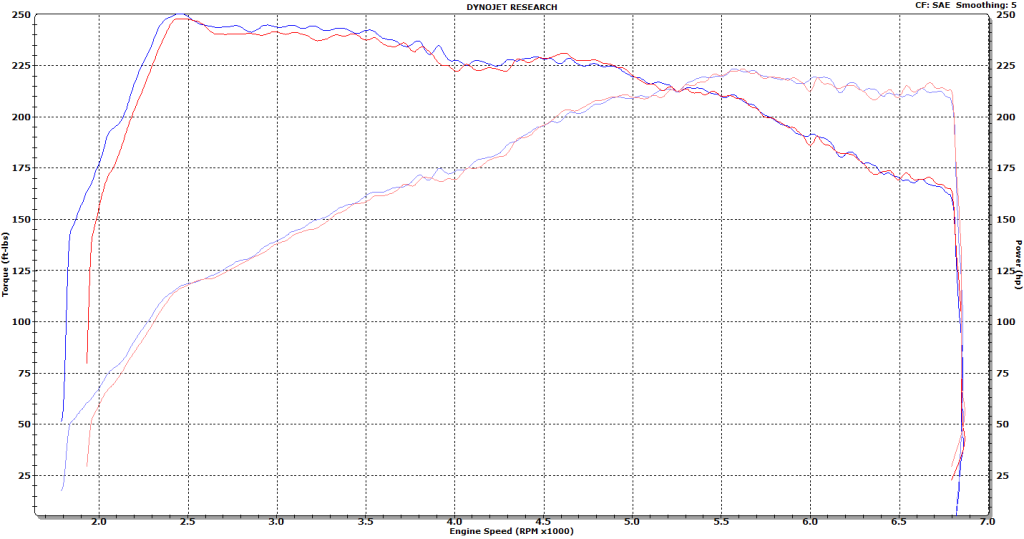 All in all the car seemed to be running well.

On April 22, I went back for the follow-up dyno sessions armed with an additional fan and a full ice chest. I had seen and recorded during my first session how significantly the temperature of the intercoolers can rise. To help with cooling the car I took the plastic engine covers off, I removed the grilles in front of the IC’s as well as removing the fog lights. I had small fans placed directly in front of each intercooler, to supplement the large fan blowing over the front of the car. I also stacked ice cubes at the bottom of the intercooler face between runs to help bring the temperatures back down. The first and third pulls were done with my water injection system running, and all three runs had my IC sprayers enabled, though I don’t believe they activated based upon the IC temperatures I recorded. Both of these systems draw water from the washer reservoir, which I had filled with ice water and topped off with ice cubes to keep cool throughout the test. Intake air temperatures stayed very reasonable during this session as a result of these efforts.

After the first run we looked over the data and compared to the prior sessions stock runs. We saw roughly a peak 80 whp improvement over the stock pulls. We completed the remainder of the pulls and I headed home to review the data. The drive home also gave me the opportunity to do a FATS run (60-90 mph) and collect some more data.

As I looked over the results I started to become concerned with the shape of the HP and TQ curves. The power and torque seemed to be very erratic, with sudden changes around 3000 rpm, and a dramatic dropoff in HP around 5000 rpm. To compound my concern, the results of my abbreviated FATS run (4200-6200) projected a full 60-90 time of 5.24 seconds. With most Stage III cars coming in under 5 sec and typically around 4-4.5 seconds, I had more evidence that something was not right with the Stage III kit. I then began to try and work with Streetwerke on getting some answers.

I wrote to Streetwerke on April 23rd asking if any of the data I had recorded looked unusual to them.

I was wondering if perhaps the Supersprint exhaust might not have had a large enough diameter pipe for the Stg3 kit. I still hadn’t heard anything from Streetwerke, so I contacted Stratmosphere to find out some information about the Milltek Superdual exhaust. I had tried this exhaust before and ran into problems with it, and Stratmosphere had been very helpful in getting the issue resolved to my satisfaction. When I spoke to Strat about my experience they asked if they could see the dyno results. I provided them a copy of my dyno plots, and upon reviewing them they felt certain the loss of HP after 5000 rpm was a result of restriction in my exhaust. They felt the Supersprint had a reputation for poor flow, and that my AWE downpipes, being 400 cell cats, were restrictive also. They suggested that despite AWE’s position on the matter, unless the cats were 200 cell I was going to run into restriction problems with a Stg3 kit. They then pointed to the results of the OCT kit that they sold as proof that my setup was inadequate. They offered their sympathy to my plight and offered to make me a good deal on a set of Milltek 200 cell downpipes and a dual exhaust. I thanked them and said I’d need to think it over. I was a bit confused about the comments they made regarding my Supersprint exhaust. Supersprint is a well-known manufacturer that has been producing performance exhausts for quite some time. They also flow test their systems. They had also been spoken about highly by a tuner I had contacted who did not sell their system but used it on his own car.

On April 25th I wrote to AWE-Tuning because I was concerned about the comments from Strat suggesting that possibly my downpipes or exhaust might have been causing some restriction and causing the problems I was seeing. I heard back from AWE within an hour of writing to them. Their assessment was that the downpipes and exhaust would not have caused the effect I was seeing. They suggested the intake air temperatures, bad gas, or chip tuning as the three most likely causes. IAT was eliminated because the temperatures were very reasonable. Bad gas seemed unlikely because a couple other FATS runs I did later on different gas showed the same poor results. This left the chip tuning as a possible root cause.

As of May 1, a week later, I had not heard back from Streetwerke so I wrote to them again. The next day they wrote back and told me they would take a look at my data and see what APR thought about it. The following day I called them (Tuesday) to see what they had found out. I was told they were busy prepping a racecar and would get back to me on Thursday (May 5). On May 9 I still had not heard from Streetwerke so I wrote to them asking if they had heard anything from APR. They wrote back and said they had not, but that they would try another person at APR.

On May 10 I wrote to Streetwerke asking if they had heard anything from APR about my dyno results. I was told they had not, and that I should try and dyno with a better fan set up than the picture I had posted to my web site, that the cooling may not have been sufficient. I wrote back and explained that the picture only showed one of the three fans that were being used and that the intake air temperatures during the tests were between 77 F and 90 F, peaking near 100 F at the highest rpms. This information had been overlaid on my dyno graphs that I had presented them; clearly they still hadn’t looked at my data.

On May 11 I wrote to Streetwerke expressing my concern with the kit’s performance and the apparent lack of interest by APR to assist with answering my questions. I asked them again to try and find out from APR what was going on with my car. It was at this time that I decided I would try and contact some of the members from the Audiworld forum who had the APR Stage III kits to see what help they might be able to offer.

What I learned did not encourage me. After sending my data to a forum member I heard responses that suggested my data looked good and nothing seemed unusual. I pressed someone that had been beta testing software for APR and was further discouraged when they suggested that it looked like the 93 octane software was maxed out in terms of additional tuning, and that they (the forum member) were focusing on the race gas code. My hopes that APR would be releasing an update dwindled as it became clear that at the rate they were going, it would be years, if ever, that an update would be produced.

As of May 16 I still had not heard any feedback on my results from Streetwerke, three weeks since I had asked them to look at my data.

I found out that two AWE Stage III S4’s had been tested on the same dyno and had produced peak numbers comparable to mine, though I wasn’t too confident in my peak numbers since the peak hp and peak tq values occurred on different runs, and my runs were not very consistent. The overall shape of the HP/TQ curves still bothered me. My car seemed to make peak numbers that were respectable, but before and after the peak values the HP/TQ dropped very rapidly. I decided I would try and compare the overall shape of the curve with what APR advertised for the kit.