With the Silver car together and on the road I’ve brought the Nogaro S4 back into the garage to continue work on it. 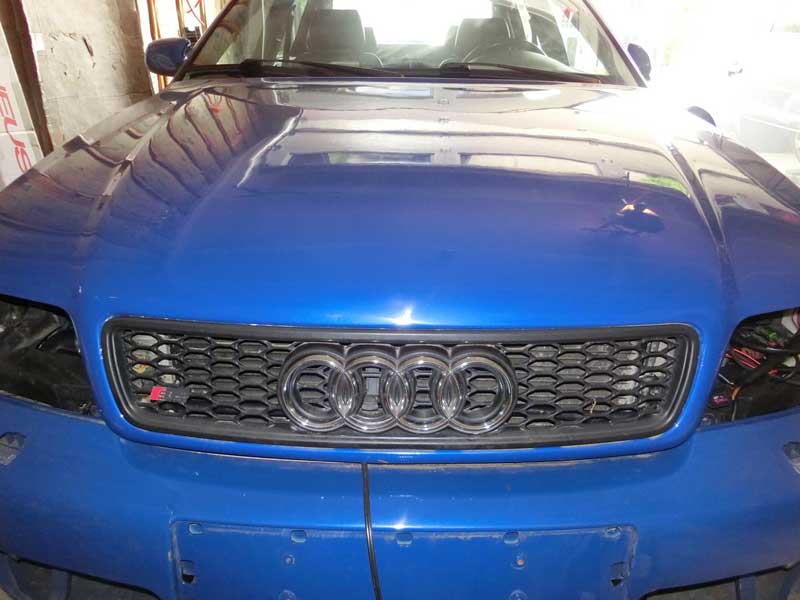 On account of another project opportunity coming along the prospects for the Nogaro to see more miles as it is currently configured are dwindling fast.  I envision this car becoming a parts source for my next undertaking.  The Nogaro is an odd collection of a bunch of solid parts that have been poorly assembled.  This regularly leaves me trying to solve puzzles the previous owners created and shaking my head in disbelief that a person would consciously choose to alter this car in the way that has been done to it.

After getting the remainder of the car put back together I began measuring some performance data with the AWE exhaust manifolds, operating in conjunction with BorgWarner RS4 K04 turbochargers.

The first question on my mind was how much, if any, affect the tubular manifolds would have on turbocharger response.  I have been using the time it takes for boost pressure to build from 2 to 11 psi as a metric for comparing the response of different engine configurations.

Shown below is a comparison of the K04 turbochargers utilizing the OEM S4 manifolds and the AWE-Tuning exhaust manifolds.  The K04 data spans several months, and encompasses various ambient temperatures, so I have tried to group the data by temperature conditions as this does have some affect on the turbocharger response.

Since I was preparing to take before and after measurements I was able to conduct a couple of data collection sessions in relatively similar temperature conditions, identified in the above chart as K04 (Summer) 85F and K04 (AWE Mani) 76F.

As a practical matter the magnitude of the slower response with the AWE product, as compared to the OEM product, may not be significant.  It’s likely that the vehicle operator would have difficulty discerning a time difference requiring measurement in hundredths of a second.

Looking at this data in a more familiar format it becomes hard to distinguish between the two data sets.

I was also interested in investigating how the different style exhaust manifolds impacted the Exhaust Gas Temperature.  I wondered if the AWE-Tubular manifolds would exhibit a generally lower EGT as a result of greater heat loss out of the manifold walls.

Looking at the exhaust gas temperatures recorded over several minutes of driving I do not see any significant difference in the trend of the EGT’s.

This initial data does not show any significant detrimental effects from the installation of the AWE-Tuning exhaust manifolds.  Later investigation will focus on potential benefits that the AWE-Tuning manifolds may provide.

While I have long wanted a set of the Wagner cast manifolds two things have kept me from purchasing a set.  One, the price is quite a bit for a set of exhaust manifolds, especially since the OEM products do a pretty fair job.  Two, they were produced with what I consider a design flaw, when installed on the engine they change the orientation of the turbo outlet such that the downpipes either need to be modified, or a set of Wagner DP’s, that have been built for this orientation, be purchased.  Modifying my existing downpipes would probably be cheaper, but that would also preclude me from using them with any other exhaust manifold if I chose to try a different set, not a desirable situation.

The marketing for the Wagner exhaust manifolds sounds impressive:

“Our engineers have removed the OEM bottlenecks by using a 3 into 1 merged collector design allowing an unrestricted path from the engine to the turbochargers. This results in increased throttle response, quicker turbo spool-up, and higher top end power capabilities.”

Reading that certainly makes me wish I had a set of these exhaust manifolds on my S4, but the two negatives have kept me away.

I also like the idea of using a set of the AWE tubular manifolds, a product that when it was being sold weighed in at a jaw dropping $2,900.  The AWE product makes the $1,790 price of the Wagner’s look like a relative bargain!

A used set of the AWE manifolds came up for sale and as I was curious to see how the flow through them compared to stock and the SRM manifolds, I purchased the used AWE’s to give them a look.

After conducting the flow bench testing I began to consider putting the AWE’s on my car to see what differences they produced compared to the stock manifolds, and in the process of thinking that through I began comparing the specs of the AWE manifolds to those of the Wagners.

What I found was that they were reasonably comparable, there were a few dimensional differences, but overall they were quite similar.  To me they were similar enough that I believe the results produced by either would be fairly representative of what the other would produce.

These dimensions are shown below for comparison:

A downside to the AWE manifolds, and upside for going with the Wagners, is the long term reliability.  The AWE tubular manifolds, and generally most tubular manifolds, have a history of not holding up over time, with cracks developing at joints.  In fact the used set I obtained have already had some repairs made to them.  Proof that this style exhaust manifold will eventually have issues, but good for me that it’s already been repaired so they should last a while longer, at least long enough for my needs.

Today I set about the task of removing the engine to make the swap over to the AWE Exhaust Manifolds. 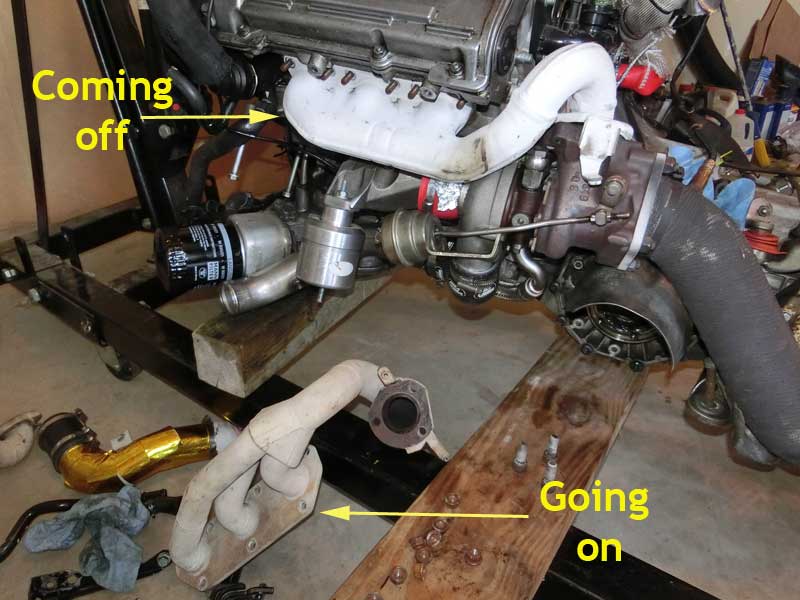 The stock manifolds came off relatively easily and I was happy to be able to leave the turbocharger in place. 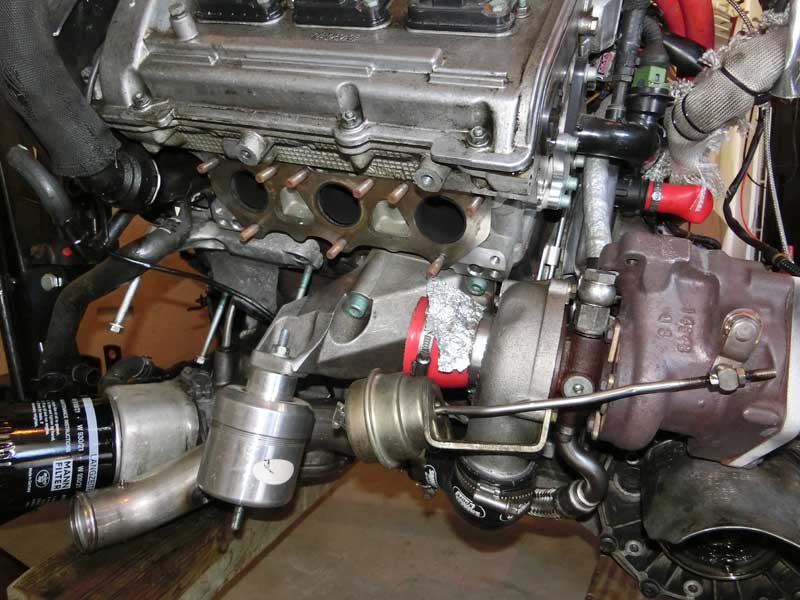 Both sets of manifolds have the Swaintech White Lightning ceramic coating. 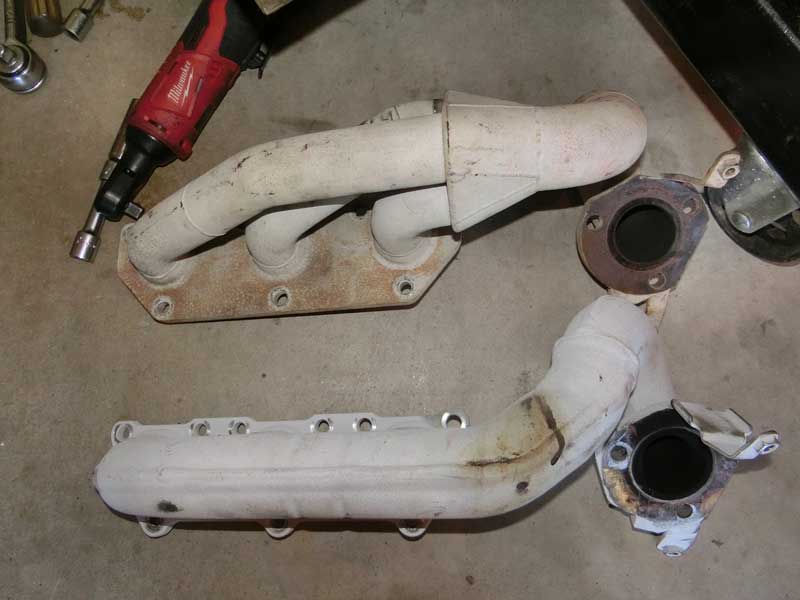 Attaching the AWE exhaust manifold proved to be a good deal more time consuming than it was to remove the stock exhaust manifold.  The location of the nuts that secure it to the head are behind some of the runners, and with the turbocharger still in place it was a bit tricky to get a wrench on some of the nuts.  Tightening the nut down a tenth of a turn at a time took a little while. 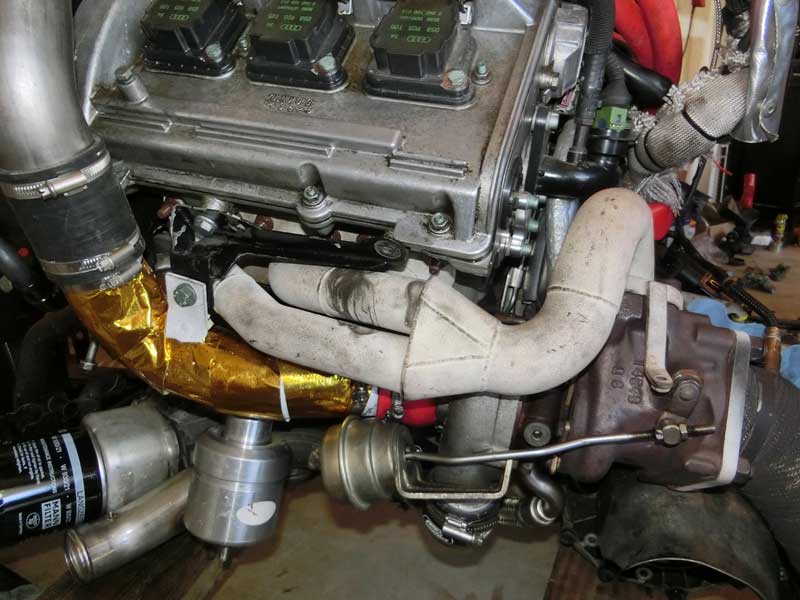 The passenger side had some challenges as well.  Again the stock manifold came off quickly.  But to get the AWE manifold in place I had to reposition the aftermarket oil supply line slightly rearward.  I also had to spend some time trying to reposition the turbo slightly in order to get some of the bolts that attach the manifold to the turbo to line up.  Eventually it all worked out. 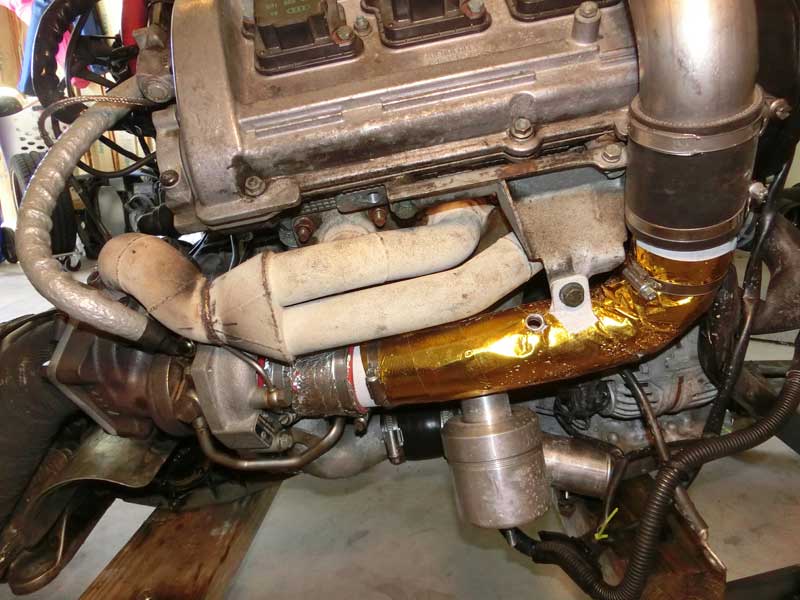 A while later the engine is back in place now equipped with the AWE exhaust manifolds.

I still have some more buttoning up to do before I will begin measuring with these exhaust manifolds.