My stock intercoolers had been on my S4 for four years and six months without ever being cleaned on the inside, and the outside front face only sprayed with water on a couple of occasions. After removing the IC’s I decided to test them without cleaning, and after cleaning the inside and outside.

In order to test them I did the following. I attached the intercooler shroud, and taped over the remaining exposed section that normally would be blocked by the car’s structure. I attached an IC hose to one side and placed a hair dryer exhaust in this hose, then filled the open space around the hair dryer with newspaper to seal the hose off. On the outlet side of the intercooler I stuck the outside temperature probe from an indoor/outdoor thermometer far enough inside, but without touching the intercooler, to allow me to record the temperature of the escaping air.

I positioned a small portable (~15″ diameter) fan approximately 18″ in front of the intercooler shroud to provide cooling.

The test was begun with the intercooler and shroud placed in an oven for 4 minutes at 170 degrees F. This was to ensure that the intercooler was warm when the test began. A clock was started when the intercooler was removed from the oven. By one minute and twenty seconds I had moved the IC to my test location, attached the hair dryer assembly, the thermometer, and positioned the fan. At 1:20 I turned the hair dryer on and recorded the temperature. I repeated this at 2:20, and then at 3:20. At 3:20 I also turned the fan on high. I then continued to record the temperature reading every 20 seconds until the temperature change during a 20 second interval was approximately less than one half a degree. This I assumed was an indication that the temperature had stabilized near steady state.

I performed this test twice with the intercoolers dirty. Then I used some degreaser to clean the inside of the IC. After two applications of degreaser I washed the IC and used a pressure washer on the outside surfaces. I then ran the hair dryer through the IC from both ends for several minutes to dry out the inside.

Then I repeated the test for times. During two of the tests, when the IC was clean, I applied a water spray to the IC front face as the fan was turned on, to try and simulate an IC water sprayer.

With this test set up there were a number of variables that were difficult to hold steady. I had to assume that the temperature from the hair dryer would remain constant throughout the test. The placement of the IC in front of the fan after removal from the oven was not repeatable; there would be some small variation in location and distance. Additionally the temperature of the IC following removal from the over could not be verified. After the cleaning of the IC I could not verify that all of the water had been dried out of the inside. If someone were so inclined they certainly could have continued to apply degreaser to the inside of the IC until they were very confident all of the oil and dirt had been cleaned out. I was satisfied with two cleansings. Time constraints limited me from doing a larger number of tests that may have provided more data that would help to reduce variability.

The charts below show the results of the six tests with the outside air temperature plotted at 64F. 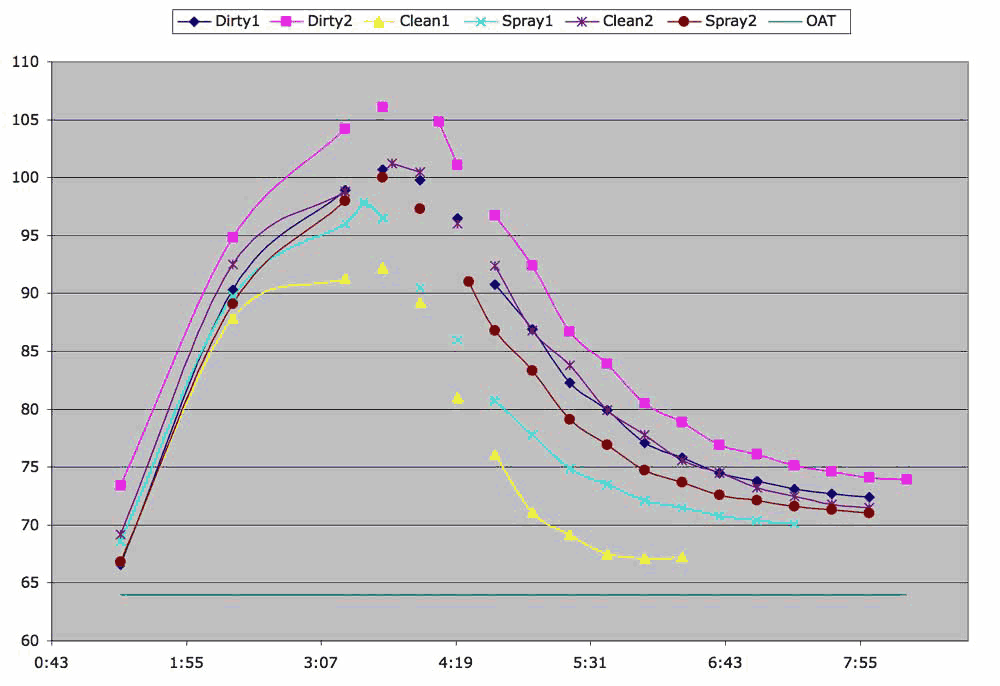 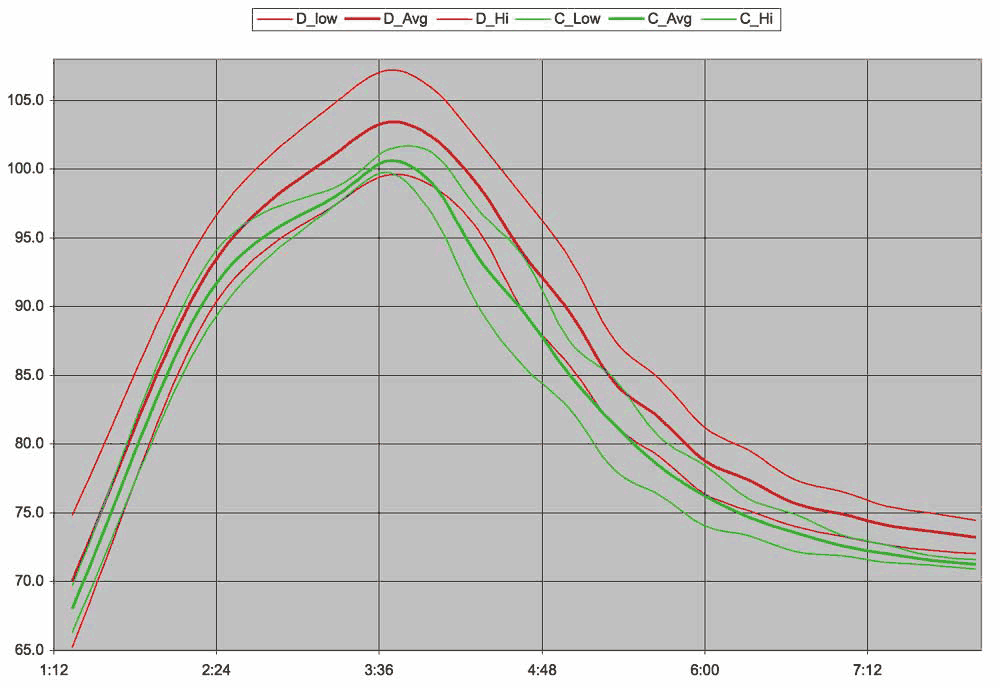 The second chart shows the average of the dirty runs by the heavy line, bordered by the standard deviation in the thinner line. The last two clean runs are plotted as well. I used the last two runs because of concern that there was still some moisture inside the IC on the first two clean runs.

There are a few things I was looking for from these charts.

There appears to be a reasonable likelihood that the cleaned intercooler operates more efficiently than the IC that was allowed to accumulate dirt for 4.5 years. Whether or not it is worth the effort to remove the intercoolers from the car to clean them, a large job for sure, for a three-degree benefit, is the question to be asked if one is considering cleaning their intercoolers.