Following up on the initial results that were recorded to assess the mass air flow through a portion of the intercooler core.  The raw data included various speed changes and spanned several minutes worth of driving, both of which made comparing the different configuration results challenging.

Presented below is data that has been sifted through to extract specific conditions so as to allow a direct comparison of like cases.

It can bee seen that there is some variances in speed between the different conditions, i.e. one case may have a median speed of 39.8 mph while a comparison case has a median value of 40.4 mph.  Holding the exact same speed on the road at different times would be hard achieve and I believe the results are close enough to represent the underlying truth values. 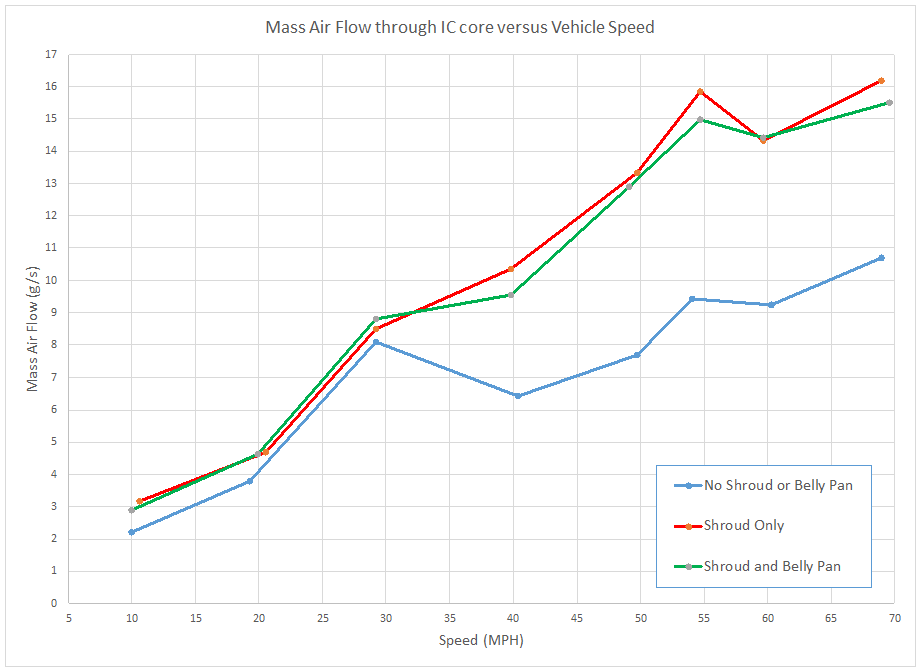 The chart illustrates a couple of interesting points.

These results show a clear benefit to having the shrouds installed for increasing mass air flow through the section of the intercooler core where the MAF sensor and housing were placed.

The results don’t give any indication as to the affect of mass air flow rate on intercooler performance, and subsequently the charge air intake temperature.  It is possible that a mass air flow rate of 5 g/s is adequate to transfer away the maximum amount of heat available across the core fins and that additional air flow in excess of that amount is unusable, therefore not decreasing the intake air temperature any further.