What early on was an assumption of being a better design turned into claims of better flow performance, often accompanying For Sale ads for the newer style intake manifold that “outflows the old style”.  I’d never seen any data to support a claim that the new style flowed better than the old design, but I was assured by sellers of the ‘new style’ that it outperformed the ‘old style’ once going with larger turbochargers.

I decided to pick up an ‘old style’ intake manifold and determine just how it compared with the ‘new style’.

Peeking inside the plenum it looked as though the old style might not be as good as the newer design and may well not flow as much.

The first series of tests involves blocking off all of the runners except for one and measuring the airflow through a single runner at a test depression of 10″ of H2O. 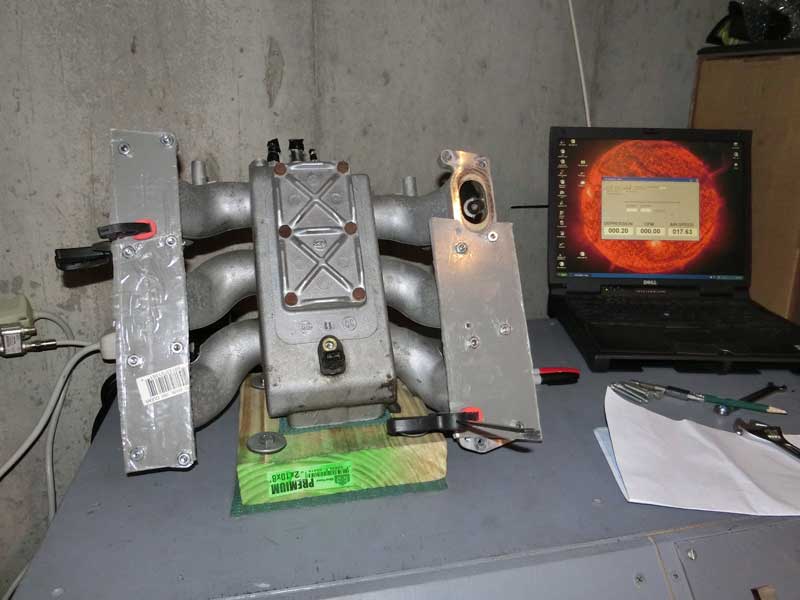 This test is repeated for each runner until all six have been flowed individually.

The final test is to uncover all of the runner exits to measure the airflow out through all of them.

On four out of the six runners the newer style measured from 1-3 CFM more than the old style, on the other two runners the airflow was equivalent.  1-3 CFM is around what I would consider to be margin of error for a single test, and factoring in about two years time between performing the new style and old style tests something minor on the test setup could have changed to account for the slight difference.

When all runners are opened up and flow determined at 28″ of H20 the two manifolds performed equivalently, each flowing 595 CFM.

While the ‘new style’ intake manifold looks better than the ‘old style’ when measured on the flowbench there is negligible flow difference.  Individual runner flow is close enough between the two items tested that test variations could be responsible for differences measured.  With all runners open there was no measurable difference in airflow between either intake manifold.