I’ve wondered about some of the different intake configurations and how they affect pre-compressor pressure losses.  To get some idea of the impact a few different options have on airflow rates I collected some parts that I have used on my car for a comparison flow test.

My S4 airbox bottom half has been modified using the popular ‘Darintake’, which is simply cutting out portions of the airbox bottom to allow more air passage.  There are a variety of ways to do this modification, images of how I modified mine are contained on the page where I tested the airbox flow with different areas removed.

Attached to the airbox is a standard S4 intake snorkel.

For this test I put each MAF housing onto a complete airbox with intake snorkel and attached the assembly to the flow bench.  The airbox had a filter in place with approximately 1,500 miles on it.  The flow bench airflow was increased until a depression reading of 10″ of H2O was reached and then the airflow measurement was recorded.

The airflow reading for each of the MAF setups is displayed below for comparison. 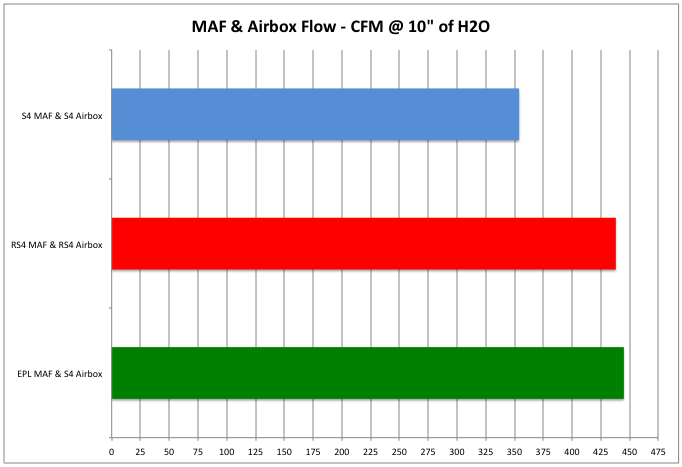 The raw numbers are:

I was a little surprised with the RS4 MAF / RS4 Airbox combination flowing slightly less than the EPL MAF and Stock S4 airbox.  The RS4 MAF has an 83mm inlet and the outlet from the RS4 airbox is 93mm.  The RS4 airbox does have what looks like a sleeve inside the outlet area, which makes for a smooth transition from the airbox to the MAF housing, but therefore makes the airbox outlet equal to the MAF housing 83mm diameter.

By comparison, the EPL MAF has a 79mm inlet while the stock S4 airbox has a 78mm outlet.  The EPL MAF does have a taper, with the outlet side opening to an 86mm diameter.  If the pressure losses were only dependent upon the cross sectional area of the piping I would have expected the RS4 MAF to show the highest flow rate, though only by a small amount.

The most likely reason for the EPL MAF having the greatest air flow is presence of the screen on the RS4 MAF causing restriction that the EPL MAF does not have.

A follow-on test with a MAF housing that has a screen, and one with the screen removed, would likely prove if the screen on the RS4 MAF housing is the significant factor impacting airflow rates versus the EPL MAF housing.

The most dramatic change comes simply by swapping out the stock S4 MAF housing for the EPL housing.  The result is a 25% gain in airflow.

I was loaned an Autospeed 90mm MAF housing to test that fits onto the RS4 airbox.  Below is a picture of the Autospeed MAF housing on the bench with RS4 airbox attached, and the updated results which include this latest MAF housing. 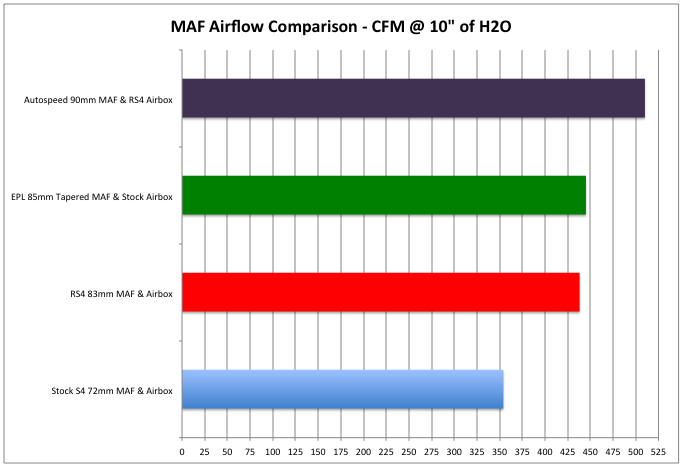