The FrankenTurbo F4H-BT turbochargers that I acquired were a beta product at the time I obtained them and upon the suggestion of a shop that I valued the opinion of I swapped the included wastegate (wg) housings for the Borg-Warner K03 wg housings.

While testing the F4H to see what they were capable of I noticed that they were having a difficult time holding boost past 4500 rpm.  I installed a manual boost controller in the car removing the N75 boost control valve with the intent of seeing if I could get the F4H’s to hold a higher boost level, approximately 24 psi, to red-line.  With the MBC set at 24 psi I logged the car with the following results: 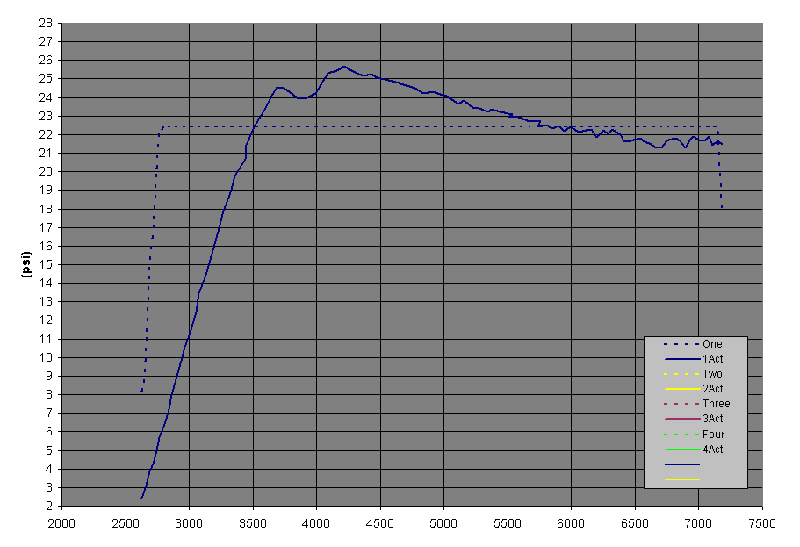 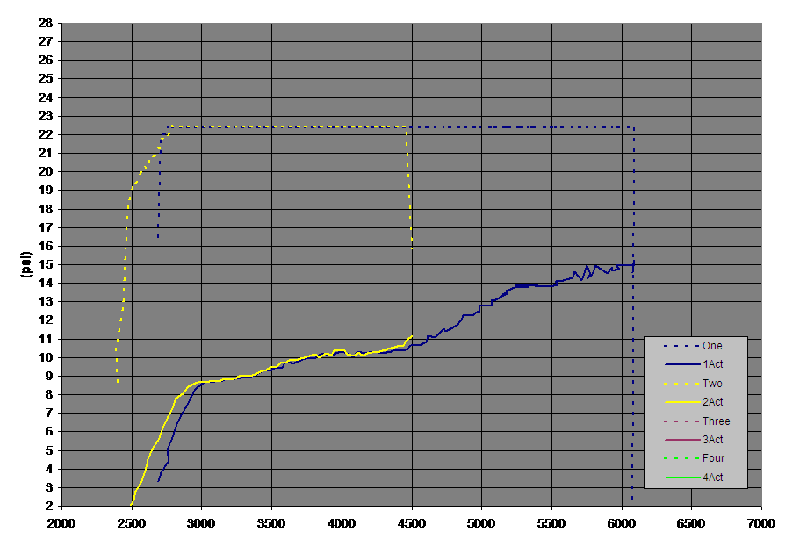 Now I was getting what is referred to as boost creep.  This results when not enough exhaust gas is bypassing the turbine and exiting via the wastegate port.  What should happen is that as rpms increase and more exhaust gas is expelled from the engine the wastegate door will open further to allow more gases to bypass the turbine, this limits the amount of boost produced by the compressor.  I was seeing boost creep, and this was because I had tightened up the wastegate actuator arm in an effort to increase the preload but at the same time I was decreasing the amount of travel available to the actuator arm.  As boost pressure was rising the flapper door opened, but as more exhaust gases were flowing the door reached at point at which it could no longer open, the wastegate arm had no more travel left.  With the door open as far as it could go, and exhaust gas volume continuing to rise with rpm, more of the gas was going through the turbine, pushing boost up further and creating even more exhaust gas.  An undesirable cycle of boost continuing to build well past what is desired with lifting off of the accelerator pedal being the only way to break the cycle.

The problem I was facing was now clear, the K03 wastegates were not sufficiently strong to hold the wastegate flapper shut at the boost levels I wanted to operate the F4H’s at and cranking up the wastegate preload would overdrive the turbochargers.  I contacted some people who had operated K04 hybrid turbochargers and they confirmed that the stock K03 wg’s were insufficient for holding boost pressure levels in the 24 psi range.  A wastegate preload in the range of 11-12 psi would be needed and this was far in excess of the K03 normal operating point.  My options were to try replacing the wastegates or shore up the wastegate mechanism via a set of helper springs.

The helper spring seemed like the easier solution as well as being something interesting to try out.  I setup a test with a spare wastegate canister that I could attach springs to in order to find a spring rate that paired up well with the K03 to give me the preload I was looking for. 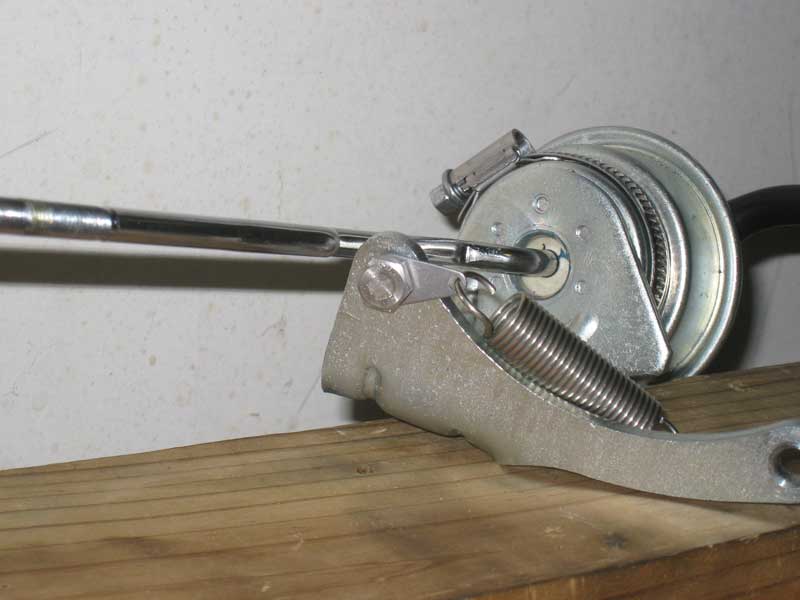 Setting the preload had the making of being a very difficult task – the high spring rate springs that I was using were difficult to extend off the car, let alone trying to extend them up inside the engine compartment with small tools while trying to tighten down the clamp to the actuator arm.

I realized that I could extend the spring off of the car and place small washers between the extended coils and then release the tension so that the spring was in an extended position.  Then I attached the spring to the wastegate arm and finally I would pull the washers from the spring coils putting tension on the wastegate arm.  This was quite the process of trial and error, but finally I was able to set the desired preload, roughly 11.5 psi of preload on each of the wastegate actuators.

I then went out to check how the new preload held with the N75 disconnected. 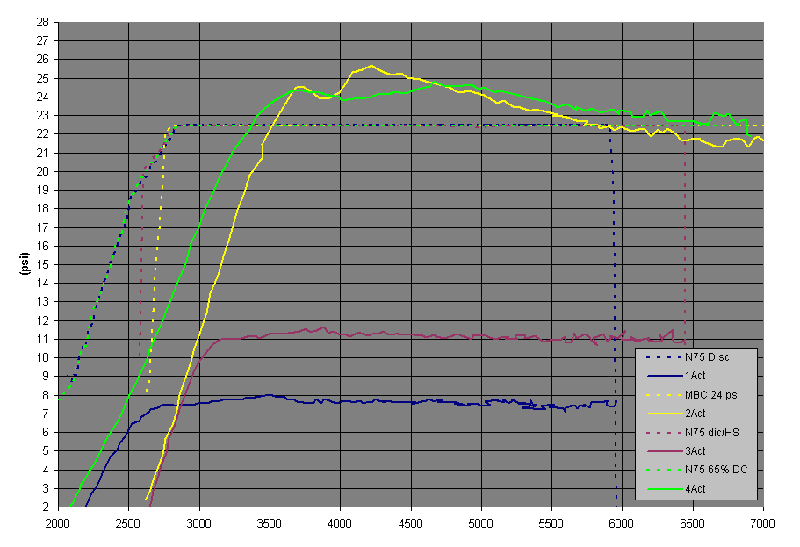 In the chart above the blue line was the K03 preload test, holding approximately 7-8 psi, the maroon line is the K03 assisted by the helper springs, holding between 11-11.5 psi out to 6500 rpm.

Finally, the real test, to see how the turbochargers performed at a boost level that I was shooting for: 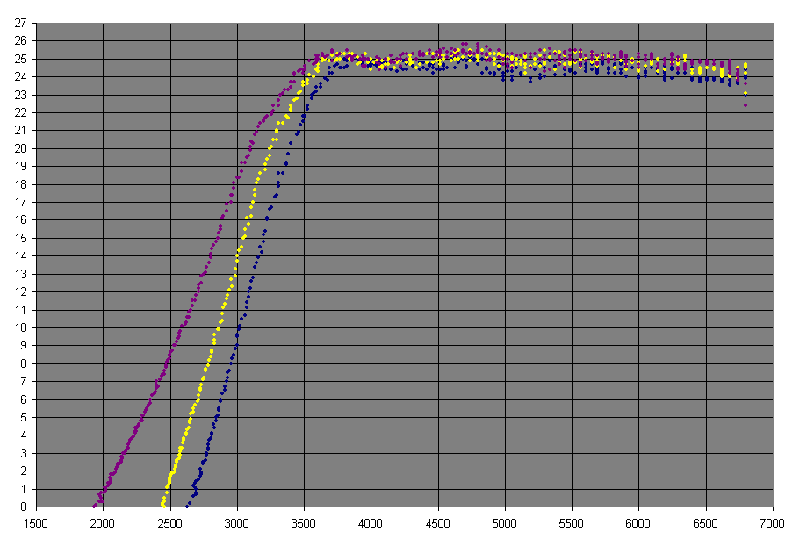 Just what I was hoping to see, the F4H’s were holding boost all the way to red-line with no sign of dropoff.

What follows is a basic overview of what the helper spring is doing.

This next section explains why simply increasing the preload via the original wastegates may not be successful when operating at high power levels, which generate higher pressures in the exhaust stream.

The importance of matching the spring in the wastegate to the application is seen in several ways.  A wastegate that is of insufficient size can lead to boost loss at higher rpm when the wastgate flapper door is forced open.  Attempting to add preload in excess of what the wastegate was designed for, so that the door stays shut, can result in boost creep.

Simply putting the highest preload wastegate available onto the turbocharger is not necessarily a desirable option because the engine computer is unable to regulate boost pressure via the N75 valve below the wastegate preload level.  The wastegate preload is the threshold beyond which the ECU via the N75 controls boost pressure.  In the absence of control via the N75, boost control is done by regulating the air intake through the throttle plate.  Part throttle performance at boost levels below the prelaod can suffer and the higher the preload is set, the greater the operating range where part throttle drive-ability can be impacted.