Try to determine how much, if any, cooler the air passing through an intake pipe may be if insulating material is applied to the pipe.

Place a stainless steel TiAL 2.25” inlet pipe on top of a Northern Tools Kerosene heater, with a Honeywell desk fan blowing ambient air through the intake pipe and a pair of Auber instruments air temperature probes located at the exit of the piping providing air temperature readings to a pair of Auber instruments gauges. The inlet pipe has two halves joined with a silicone coupler approximately halfway down the length of the intake pipe.

Measure the temperature of the air passing through the pipe when the heater is shut off to establish a baseline and then turn the heater on and allow it to heat the pipe for 32 minutes. Shut off the heater after 32 minutes and continue to record the air temperature for 8 more minutes, for a total test time of 40 minutes per configuration.

The chart below shows the results thus far.  I ran low on kerosene fuel and had to stop after two tests until I can resupply the heater’s fuel.

The chart is of the temperature delta over the starting temperature for each configuration and an average of the two sensor probes.

The heater is shut off at 32 minutes into the test.

For the DEI Titanium Exhaust Wrap test at 31 minutes in I switched the fan speed from low to high to see how the temperature was affected.  As expected it started to decline with the higher airflow.  At 32 minutes I shut the heater off and returned the fan to the low setting as had been done with the other configurations. 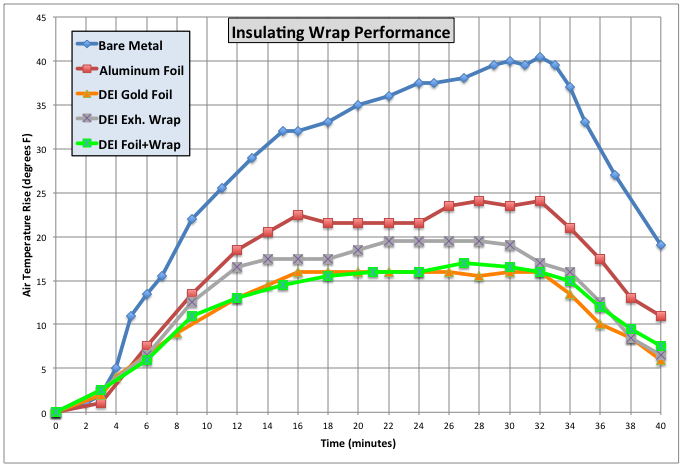 All of the wrap options tested showed some improvement over the uninsulated pipe.

Surprisingly the combination of DEI gold foil over the DEI exhaust wrap performed no better than the gold foil alone.

Aside from the one clear conclusion it would be difficult to guess at how well these products would perform on the car.  The conditions on the vehicle are quite different from those tested under here although the bare sensor on top of the heater registered a maximum temperature of 200 degF which is close to what I recorded previously near the exhaust manifold.  It’s unclear if the cost of the performance specific products from DEI is justified over a common roll of aluminum foil that can be purchased for only 2-3 dollars at a grocery store.

I was interested to see how a double wrapping of heavy duty aluminum foil would perform.  The added thickness of the heavy duty version should help, and the second layer should provide for a small air gap to improve the insulating properties.  Additionally, being very inexpensive relative to the other products a second layer is not a cost concern.

Unfortunately a cold front moved through the area and temperatures dropped around 12 degrees in the garage making these results hard to compare with the previous days results.

As a further experiment between the 32 and 34 minute marks I placed a funnel at the entrance to the pipe and turned the fan to maximum speed to increase the airflow through the pipe.  Between the 38-40 minute marks I put the test setup back to the previous configuration.

After having a portion of the turbo intake pipe coated with the Swaintech ceramic coating I put the entire intake pipe back over the heater. 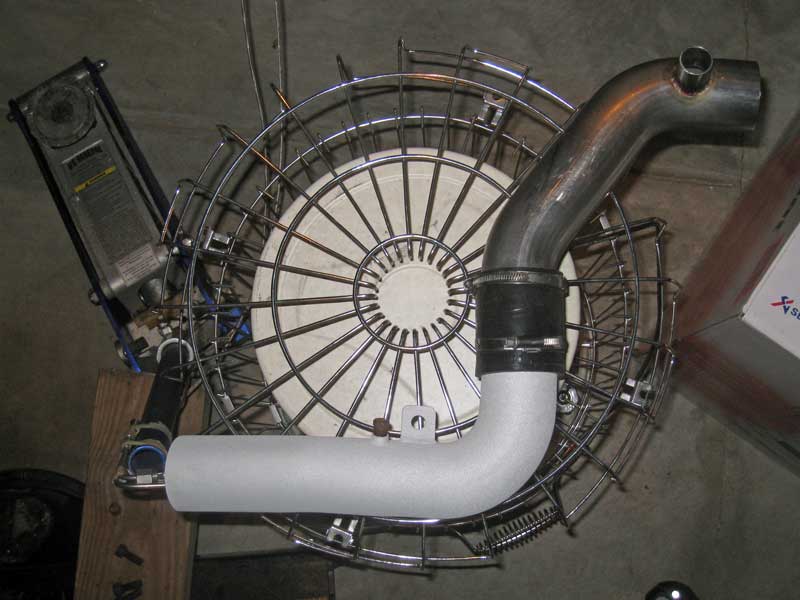 With only half of the pipe coated, but all of the pipe exposed to the heat, I was not expecting results to come close to that of the fully insulated pipe. 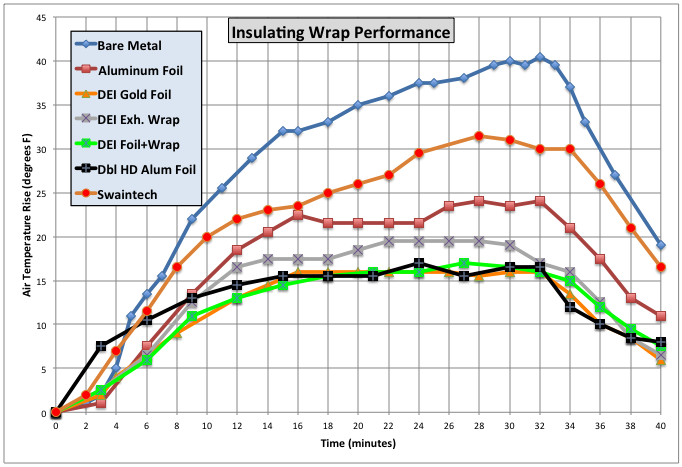 Given the setup I thought the results were good with the Swaintech coating.  Temperatures were stabilizing toward the end of the test which did not happen with the untreated inlet pipe.

Note: I ran the swaintech test for 34 minutes before shutting off the fan where the other tests had been run until 32 minutes.  I did this to confirm that the temperature changes had ceased.

It would have been interesting to coat the entire inlet pipe and see how it performed, but functionally I did not feel any potential gains would be worth the cost.  The reason for coating only a portion of the inlet pipe was to slow heat transfer in the region near the exhaust manifold.