There’s not been much activity in the turbocharger selection area recently, but that has changed with the receipt of this data showing a F21 equipped B5 S4 operating with E85 fuel and measured on a Dynapack dynamometer.

It’s good to see a F21 car operating the turbocharger at a boost level consistent with what I believe they are capable of, steady 23-24 psi out to redline. 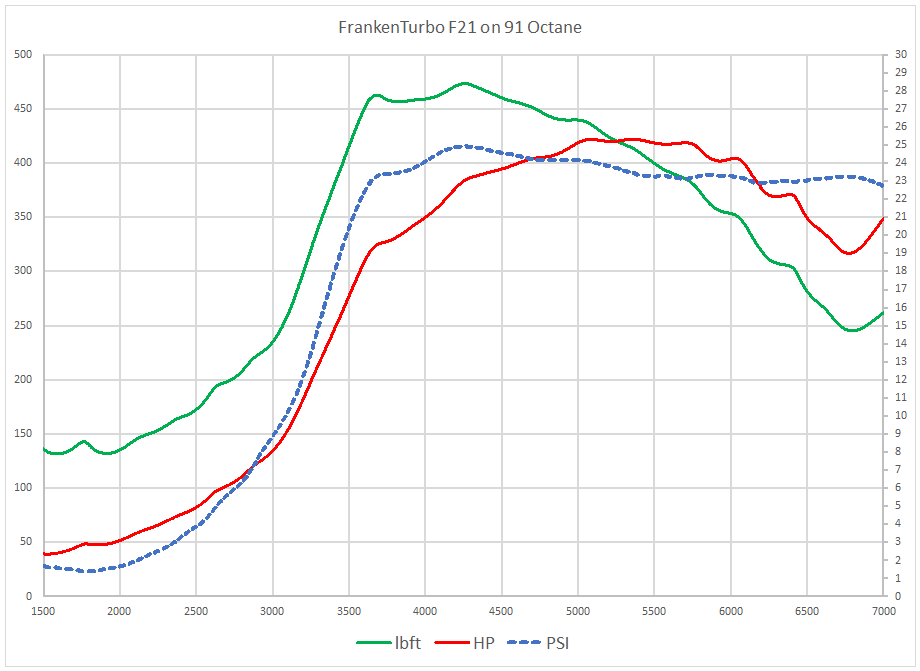 In terms of selection criteria these results show that F21’s are going to be able to push the edge of my comfort zone with the stock motor.  With 93 octane instead of 91 I’d expect the horsepower and torque to nudge up another 15-20.

The contenders still are:

After relocating the Auber air temperature sensor to a fitting on the turbocharger inlet pipe, a position just forward of where the exhaust manifold and inlet pipe are running parallel and close by one another, I logged the temperatures again.

The point was to try and determine how much of the pre intercooler heating of the intake air is taking place in the inlet pipe that runs alongside the exhaust manifold as well as through the turbocharger.

The chart below shows the results:

The lines are a bit busy, so I will try to explain what the chart is showing.

IAT is the temperature of the intake air as reported by the car’s intake air temperature sensor located after the Intercooler inside the Intake Manifold.

CIT is compressor inlet temperature, the intake air temperature before it goes into the turbocharger, and also because of the placement of the sensor the air has not yet passed alongside the exhaust manifold.

COT is the compressor outlet temperature, the temperature of the air after it has exited the turbocharger, but before it passes through the intercooler.

The morning temperature trend is similar to what I recorded yesterday (IAT Problems) and about a week ago when I looked at IC Efficiency.  The temperature exiting the turbocharger steadily rises well above ambient temperatures even when the car is not being driven hard.

The midday data introduces the pre-turbocharger air temperature and shows this value tracking right along with the post intercooler intake air temperature.

While the intake piping and airbox are contributing some to the temperature rise of the intake air, the greatest climb in temperature is taking place within the inlet pipe that runs alongside the exhaust manifold and the turbocharger compressor housing.

I’d like to narrow down further the location where the temperature is being affected greatest.  If I can identify specific locations of great heat addition I can then investigate possible ways to mitigate the heat addition.  If the exhaust manifold is a significant contributor a few easy options would be ceramic coated exhaust manifolds, ceramic coated inlet pipes, and wrapping the inlet pipe with a thermal shield.

If the turbocharger compressor housing is identified as the greatest contributor finding a remedy will be much harder.

Answering one outstanding question from the information I recorded yesterday, I went out this morning and logged the intake temperature again, this time with the full intake snorkel in place.  The two sets of data from yesterday were made with the end of the intake removed and I thought that putting the system back to how it is supposed to be set up might make a difference.  Hoping to see the intake temperatures drop 30 to 40 degrees Fahrenheit was probably too much to hope for, but it would have been nice to see some lower temperatures even if only by a small amount.

The chart below is from today and it doesn’t look much different from what I recorded yesterday. 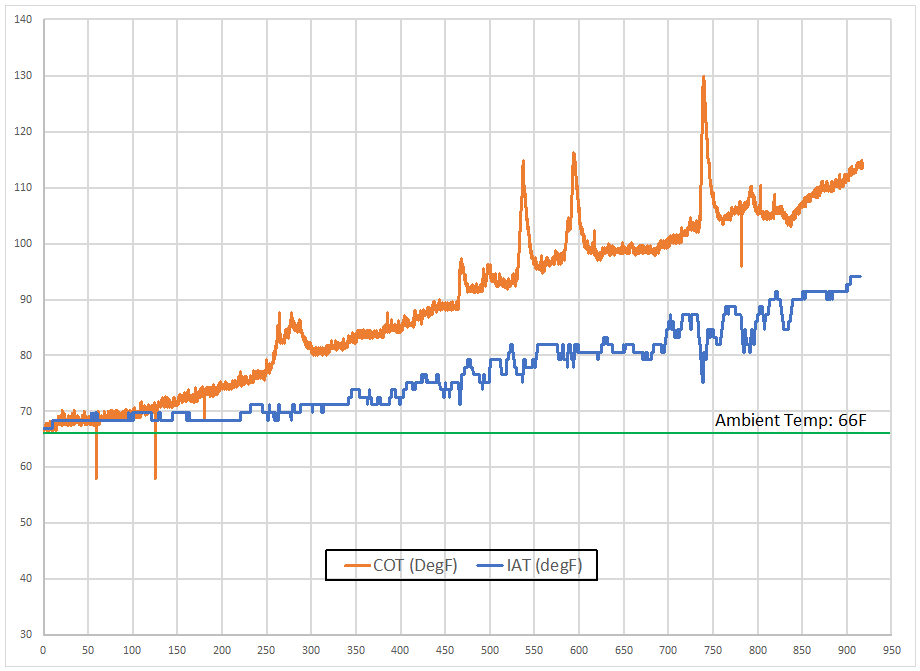