In Need of a Metric

To be able to determine if the Turbocharger blanket increases the rate of boost rise I needed to establish baseline performance of the BorgWarner K03 turbo’s without a turbo blanket installed.

Fortunately I had a series of datalogs from my S4 to draw upon to get some relevant data.  The boost versus engine speed chart shown below is pretty typical of the kind produced to show turbocharger boost response. 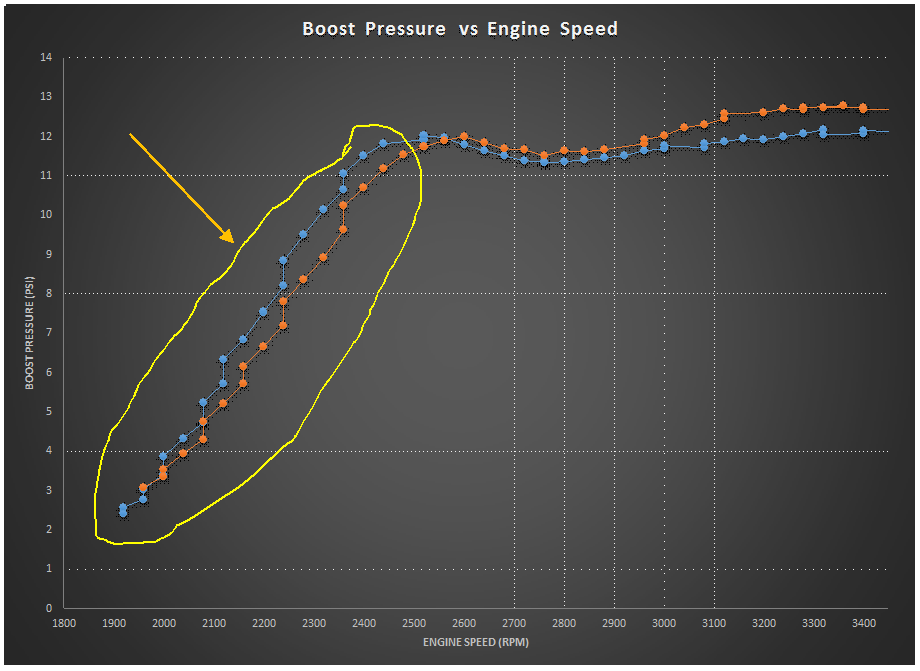 The area of interest on this graph is circled in yellow, where the boost pressure is increasing along with engine speed.  Unfortunately, in this format making comparisons between subsequent data series is not easy, at least not in the way and to the level of detail I was interested in having.  My goal was to try and characterize the turbocharger performance and account for different conditions in the process.

To this end I decided to evaluate the average increase in engine speed (rpm) with boost pressure rise (psi) occurring during boost ramp up.  The was captured by looking at a specific boost rise range, approximately 1 psi up to 11 psi.  Rpm / psi became the metric I used to represent how rapidly the boost was rising during this phase.

The first factor I chose to consider was Temperature, both the Outside Air Temperature and the Intake Air Temperature.  I plotted out several data points to determine if there was a correlation between those temperatures and the rate at which boost pressure rose on initial spool up. 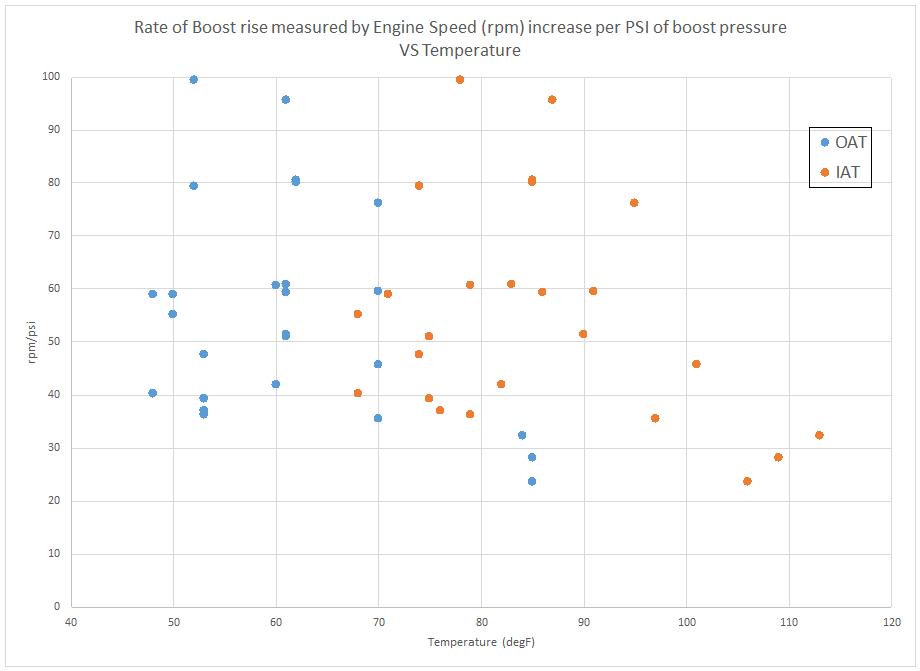 With almost two dozen data points no clear relationship was showing, the data ‘cloud’ did not appear to be moving toward a pattern that would show a relationship between boost rise rate and temperature.

I decided to try a different metric for the boost rise rate, I would evaluate the number of seconds that passed during the boost pressure increase from 2 up to 11 psi. 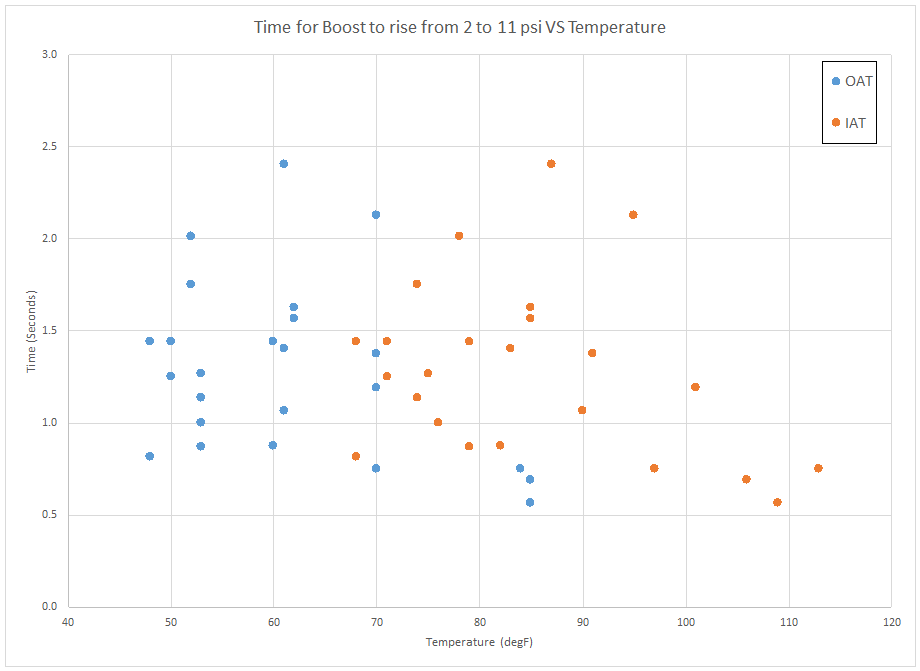 Again there was no strong correlation between either of the Temperatures and the boost rise time. 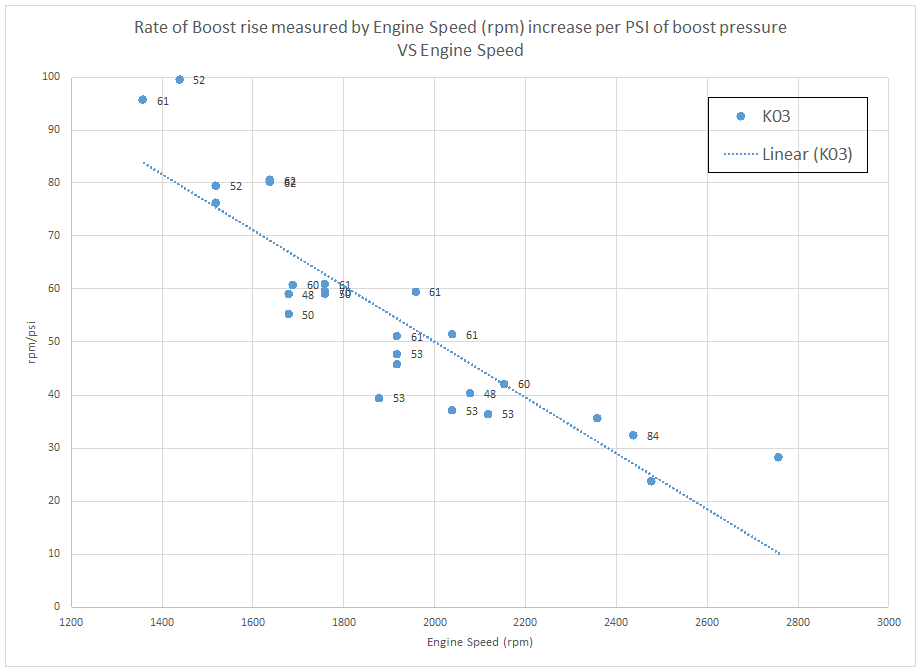 There was still a bit of scatter around the trend line, but at least now there was a trend!

Note: The number next to the data points is the Outside Air Temperature (OAT) for that data point.

Next I plotted out the 2-11 psi time data versus the starting rpm. 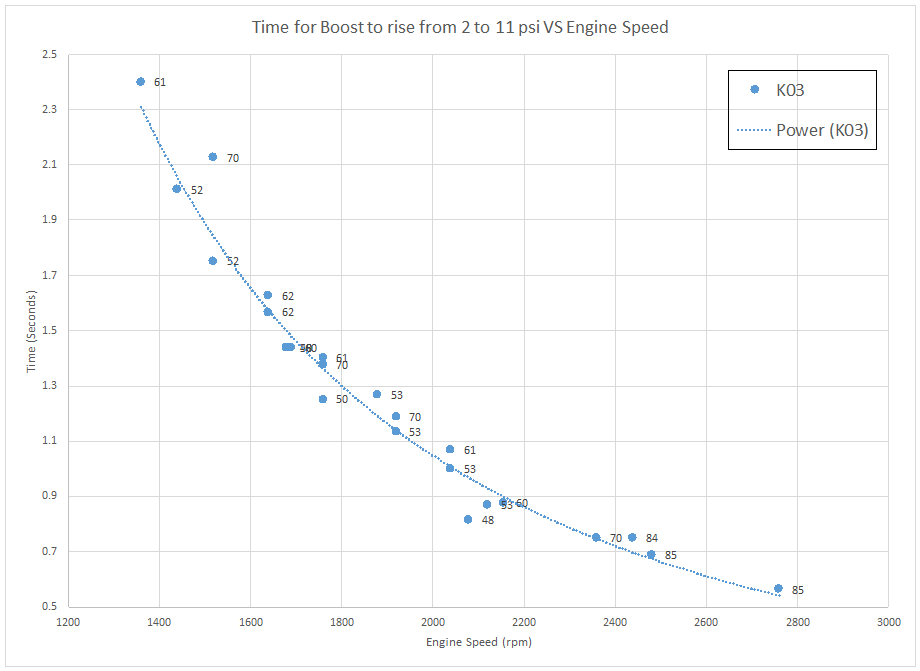 This was the type of correlation I was hoping to get.  The way the data was closely tied to the trend curve means that once I have the turbocharger blanket in place and collect data on it’s affect I should be able to determine with confidence whether it makes a change in the boost rise performance or not.

I also have a good collection of data logs from my car with BorgWarner K04 turbochargers installed.

I thought I could test how well my theory of using the metric trend curve would hold up to a test case using the K04’s. 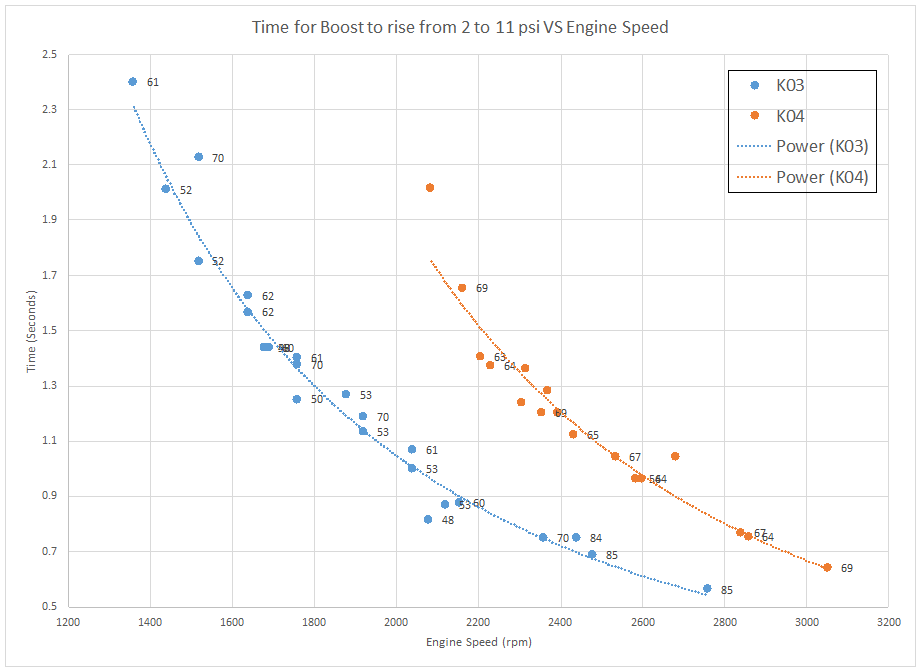 I added the K04 data to the un-blanketed K03 data producing the chart above.  There is a clear difference in performance easily recognized by the respective trend lines.

I found it interesting to note how the increase in rpm, which equates to an increase in airflow through the turbocharger turbine, begins to flatten out as rpm increases.  While this makes sense when you think about it, seeing the results plotted out for two different size turbochargers is a nice validation of what one would expect to occur.

Finally, I also plotted out the comparison data using the other metric format:

The K04’s produced a more consistent grouping around the trend line, but more importantly this format also highlights a distinct performance difference between the two turbochargers.

As I continue moving forward toward evaluating the Thermal Zero turbocharger blanket on the BorgWarner K03’s I feel like I have a good method for determining if they make a difference in the spool up rate of the turbochargers.