The information collected by the B5 S4 survivor poll provides some material to make a few swag’s.  One question I was interested in exploring is “how many more years will the North American supply of roadworthy B5 S4’s last?”

To formulate an answer requires making some significant assumptions, but weighed against the alternative, a completely uniformed guess, the assumptions seem like a fair risk to assume.

Step 5.  Making an assumption about the annual loss rate, that it follows a Normal distribution curve. 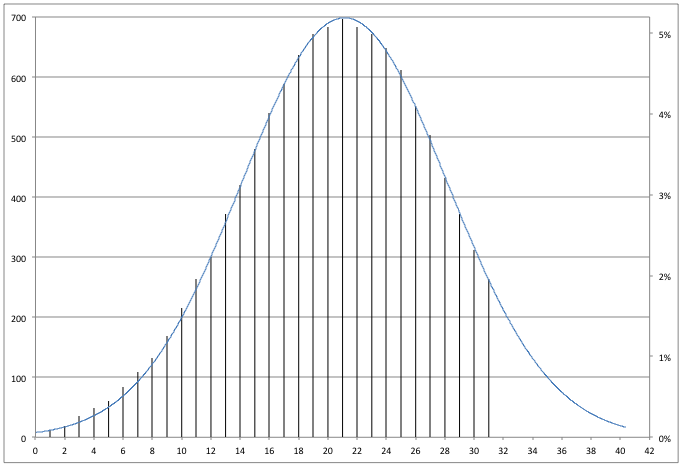 The rationale for this is that early in the vehicle lifecycle it was relatively expensive.  This has several consequences, first that owners will be more likely to take better care of the vehicles.  Second that the higher cost to acquire the vehicle will mean the demographic that can afford it are in a higher economic range and likely more mature than the general population, thus they will drive more responsibly and be less likely to have an accident.  Third, the higher value of the vehicle means if it incurs minor damage it is more likely to be repaired by an insurance company.

As the vehicle ages and drops in value the annual loss rate rises for reasons similar to those already given.  A low-cost vehicle will not be cared for as well.  Purchasers who are inexperienced drivers now have access to the car.  The low-cost means that minor damage could lead to totaling the vehicle.  The parts on the vehicle have become more valuable as a collection, rather than the vehicle as an operable automobile.  Parting a car, and making it not roadworthy, becomes more lucrative than selling it whole.  It is during this time that the annual loss rate rises.

Finally, there will come a point when the annual attrition of a fixed inventory will leave few vehicles roadworthy.  It is at this point that the vehicle may become valuable once more.  It may still be owned by people who take care of it, and the others that are sold MAY begin to demand a premium, which will once again put it out of reach of many of the inexperienced operators.  Consequently the attrition rate begins to slow again.

The B5 S4 has still not reached the maximum attrition rate, which should be reached in about 5 years.  At which time there will be approximately 5,976 B5 S4’s still roadworthy in North America.

In 10 years, as the attrition rate is dropping, the number still on the road will be around 2,808

Four years after that, 14 years from now, the number of roadworthy B5 S4’s is expected to be one-tenth of the original North American supply, only about 1,188 S4’s left.

As was stated at the start, there are some significant assumptions being made to generate these projections, but then the alternative is to simply guess.