After the major power modifications; chip, exhaust and downpipes, I began to look at ways to get more out of what I had. The intercoolers were the next area for exploration.

At the point in time I was considering this modification front mount intercoolers for the S4 were just beginning to become available and I was not anxious to become a Beta tester for a new product. The RS4 intercoolers were an option but I was not enthusiastic about spending that much money (approx. $900) or enduring the modifications to the cars structure in order to fit these parts in my car.

IC Mister. It cost only 1/3 what RS4 intercoolers cost, and even less than the FMIC’s available at the time. It could work with those upgraded IC’s later on.

My driving style is one that consists of occasional spirited acceleration thus I would not likely be running the fluid reservoir down very frequently with the IC Mister. Of the options available it was the most cost effective given my driving style.

If I were more adventurous I could have put the parts together separately, versus buying a kit, and saved some more money.

I have found with mods that sometimes trying to save money getting the system can result in a great deal more time spent installing the system.

After installing the plumbing I initially used the system in manual mode, spraying the IC’s via the windshield washer/headlight washer system. I wasn’t particularly happy with the placement of the spray nozzles and some confusion on my part about the necessity to have the headlights on resulted in an opportunity to adjust the nozzle placement.

The two areas where I feel I can have the greatest affect on the system performance are through fine-tuning the control box and properly installing the spray nozzles. As far as adjusting the sprayers is concerned I feel the most desirable position is one that allows the entire face of the IC to receive the misting spray.

I had contemplated trying to place the nozzles farther upstream in the airflow, figuring that the mist in the air would cool the air down, and then this cool air would flow over the ICs allowing for more effective heat transfer.

After doing some reading about water injection with turbine engines I came to the conclusion that placing the nozzles too far upstream would not be beneficial. With that placement ruled out I took a look at how I could place the nozzle in a position to best cover the IC face.

One significant constraint I imposed was to keep the fog lights in place. My testing of the system without the fog lights had not shown their removal to produce any measurable benefits. A second constraint was to try and keep the tubing out of the airflow to the ICs.

The passenger side tube was route in front of the headlight washer unit and then above and toward the rear of the fog light. This relocation was fairly easily accomplished. The nozzle is angled slightly upward and in conjunction with the high forward placement of the nozzle within the IC intake area should yield very good results.

On the drivers side I ran into a problem due to the shorter length of the tube on that side.

The Avalon kit came supplied with an extra hose that is not used with the S4 and thus I was able to cut a new piece of tubing to use on the drivers side. This one was also routed in front of the headlight washer unit, and just above the fog light. Due to the shroud around the IC it wasn’t possible to angle the sprayer upward, but fortunately with the nozzle mounted high in the intake such as this is it should be spraying directly at the IC and just above the halfway point. A position that I feel is very good given the limited options I had and self-imposed constraints.

This new setup is now much closer to what I was hoping to have. The sprayers are now further from the ICs than I had them originally and with their higher location they are aimed squarely towards the center of the IC face.

Location of the IC spray nozzles.  There are not many options when deciding upon where to place the IC spray nozzles.  There’s a little more flexibility in deciding where to have them spray.  Because the lower portion of the intercooler heats faster, and to a greater degree than the upper portion, this was where I chose to focus the spray from the nozzles.

The IC sprayer controller was configured to activate with an injector duty cycle corresponding to approximately 4-5 pounds of boost.

The location I chose to conduct the test had a 45 mph speed limit.  This prevented the boosted acceleration, and consequently spray time, from lasting more than a couple of seconds.

The first test was done with the car idling until the temperature recorded at the back of the intercooler was approximately 110F.  The car was slowly accelerated up to 15 mph in second gear, and once 15 mph was reached went to full throttle.  The car was accelerated to 45 mph and then lifted off the gas, followed by 40 seconds of steady driving at 45 mph.  This was then repeated in the opposite direction.  The first two runs were made with the IC sprayer off (dark blue), the second two with it on (yellow). 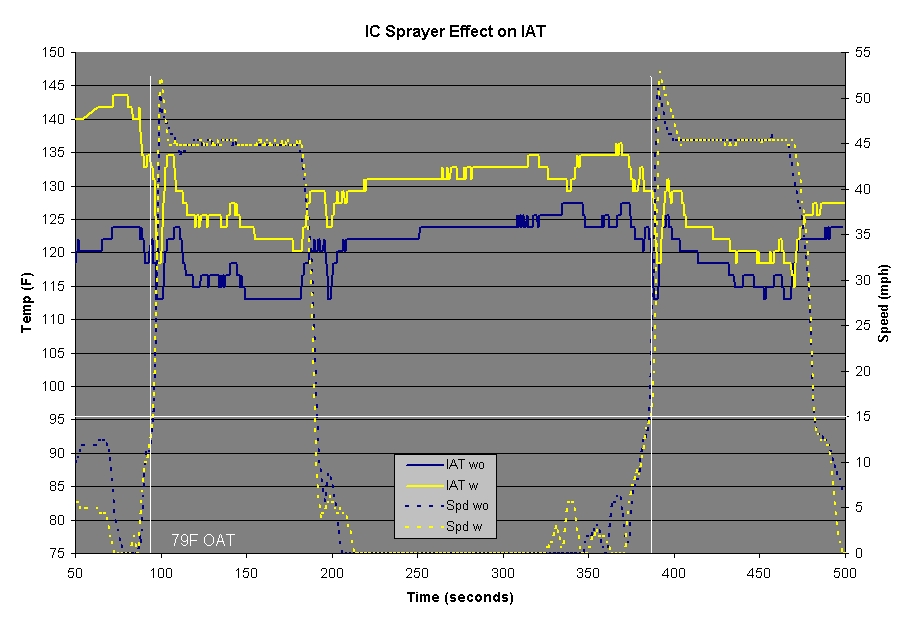 The next test involved trying to keep the IC sprayers spraying for a longer duration.  This was accomplished by accelerating quickly for a short time, long enough to trip the IC sprayer, and then maintaining sufficient injector duty cycle, without using boost.  By doing this the car was driving at a higher rpm, but without boost. 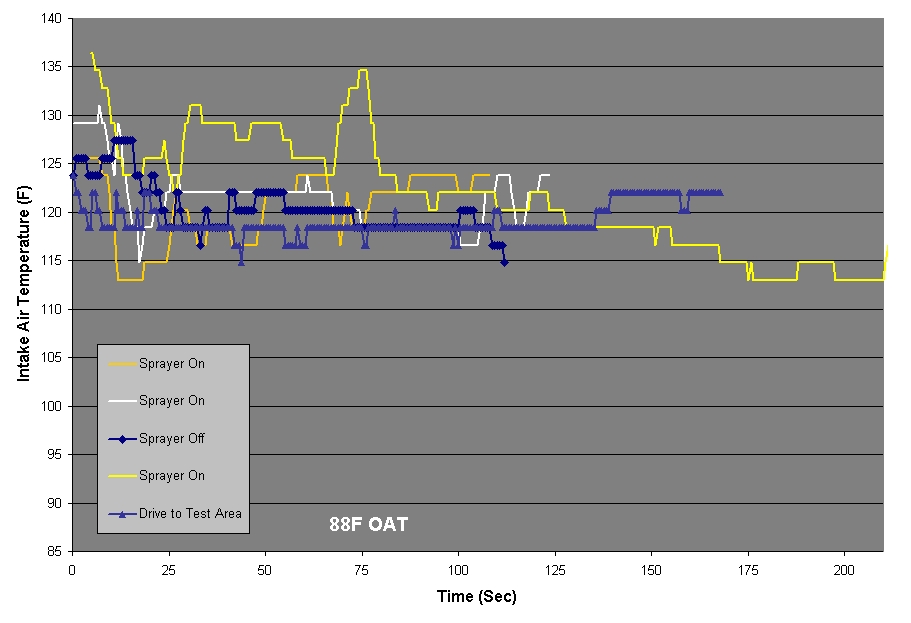