I received a set of Audi RS4 intercoolers courtesy of Matt Danger on the Quattroworld forum.  Matt deserves a big thanks for supplying the intercoolers as well as paying for all of the shipping, to me and back to him, which goes a long ways toward enabling me to put the donations I’ve received toward additional testing opportunity’s.  Thanks Matt!

By now what I am doing should be understood so I’ll skip rehashing my goal.  If you haven’t been following along I recommend reading over the Stock, ER, and AMD flow test pages which were tests conducted prior to this test.

A couple of points to emphasize about this testing.

First, similar to a dyno test, the real value lies in conducting repeat tests with the same test equipment on different test articles.  Trying to compare results from my flowbench to another, such as a SuperFlow 600, may or may not produce like results.  The absolute numbers are not as important, nor as reliable, as the relative performance results of the intercoolers being tested.

Another point concerning the results is that the pressure loss curves show measured and calculated values.  This is because after a specific level of pressure differential is reached inside the flowbench the digital manometer’s sensor maxes out.  The manometer design is aimed at measuring flow rates at 28″ of water which is a very common test point.  What I am doing is slightly out of the norm for a flowbench in that I am trying to flow as much CFM as possible and record the pressure losses across a test article (intercoooler).  Because the intercooler presents a good amount of back pressure the sensor is maxed at airlfow values well below what would be seen on the car.  To attempt to provide some idea of how much pressure loss might be encountered when equipped on an S4 I have used a least squares fit to predict where the pressure loss curve would be at higher airflow rates.  Predicting beyond the measured data is an imprecise estimate, but by using the same method for each test case the relative values will remain accurate, the absolute pressure loss readings may not be exact.

The keen eyed reader will see that I’ve switched the stock passenger and driver data labels.  I had shown them reversed previously.

I’ve broken out passenger and drivers side onto separate charts to try and reduce some of the clutter.  Also, as I continue to add more data to the charts the color scheme and order of presentation keep changing, I’ll try to not do that in the future if I can help it.

And the latest results… 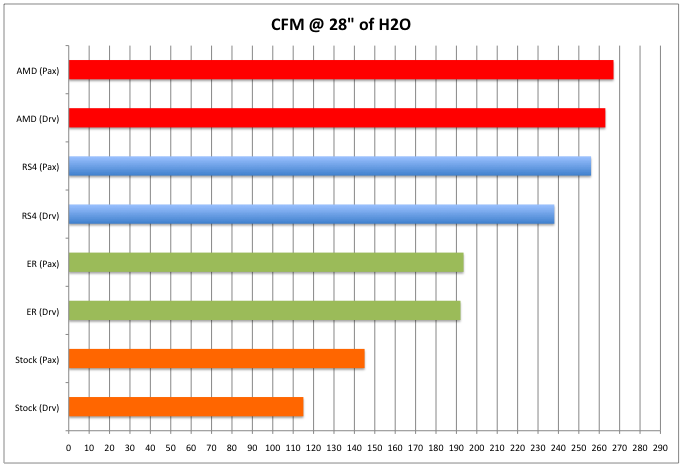 Checking with Matt he confirmed the intercooler had been damaged at one point and repaired.