I’ve got the Boost Manager working partially, it’s reading the MAP but not RPM.  That’s enough to allow me to test it out on the road, which is what I did this afternoon.  I set up an injection table that was tailored toward the boost only trigger and that would approach spraying at roughly 75% of the pump duty cycle once the stock boost level had been exceeded.

I’ve not yet established at exactly what compressor outlet pressure the K03’s are operating in conjunction with the AMD IC’s, but I figured they are probably around 17-19 psi at the initial peak boost.  I therefore set the pump duty cycle to peak around that psi.

I then went out to log the car with the Boost Manager functioning and also with it disabled.  First I did a pull without the system and then a couple with it on.  The entire drive is graphed below. 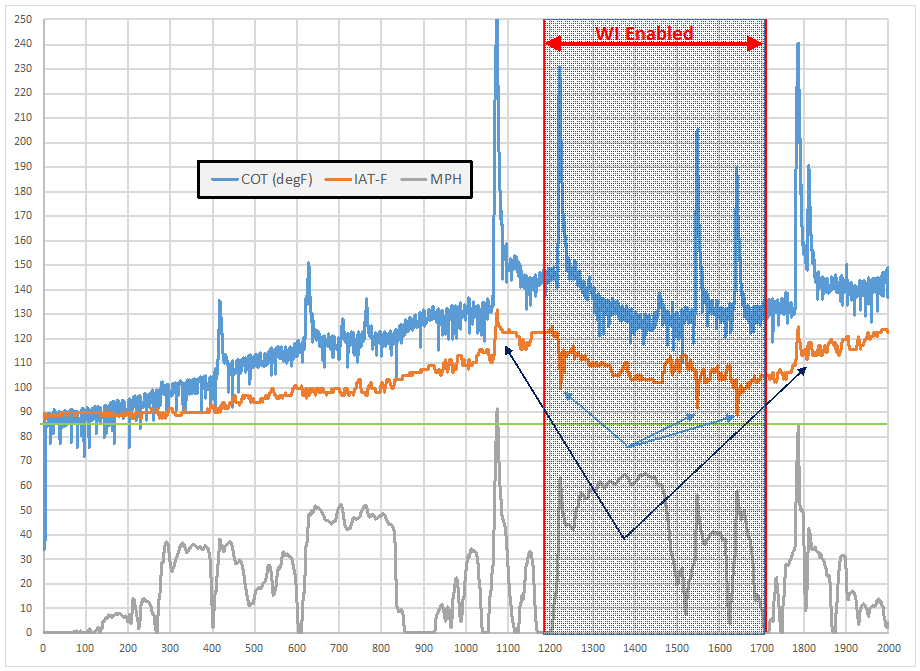 During the period where the Boost Manager is active the intake air temperature drops in conjunction with the boost events, when the system is off the IAT’s either remain steady or rise.  In order to better define the outcome I’ll need to look more closely at each event.  For the time being I’m not going to be doing that because during the second pull I encountered something unexpected.

When I made the second pull, the first with the Boost Manager spraying, I found that around 4000 rpm the car bogged down.

I repeated this twice to confirm the outcome and then secured the Boost Manager by swapping to a 0% duty cycle map that would keep the pump inactive no matter the boost level.  With the Boost Manager back off I did another short pull without encountering the bog event.

It seems likely that using dual 1.0 mm Aquamist nozzles along with the Boost Manager at ~75% duty cycle is too much water for the motor to operate with.  During this drive I was using 100% water.

Following the bog I had a flashing CEL which went away after a few seconds but when checking the ECU after the drive with VCDS I saw that it had logged a Random/Multiple Cylinder Misfire DTC.

Next up I’ll need to start trying to dial back the amount of fluid being injected to prevent the undesirable results but still keep intake air temps in check.

Often when I speak of favoring low end performance from my S4 this viewpoint is met with questions about why I wouldn’t just downshift to keep the car in a powerband.

To determine where I operate the car most often during typical driving I logged rpm during a typical drive and created the histogram below to show at what RPM I most often find myself, and why I’d select a turbo that has a strength in this region.

Since I spend the majority of time at a lower rpm I prefer to have a setup that will respond favorably while in this region.