Last spring I picked up a set of RS4 up pipes, metal throttle body boot, and RS4 throttle body.  I was a bit surprised at the airflow improvement through the RS4 setup, even over the APR bipipe the gains were noteworthy, around a 10% increase in airflow (RS4 parts flow test).

I contacted Silly Rabbit Motorsport (SRM) to find out about the possibility of having a customized set of intercoolers built that would use 2.5″ inlets and outlets.  They said it would not be a problem, and so I began making plans to try this idea out.

Another issue cropped up relating to water/methanol injection.  On my APR bipipes I have tapped the pipes for use with Aquamist nozzles, I have no desire to similarly tap the RS4 up pipes for use with water methanol injection.  I decided that installing the nozzle bung on the IC endtank would be a preferable option, but I didn’t know if this would be possible.  I contacted SRM again to find out about adding the w/m nozzle bungs onto the end tanks, once more they said it wouldn’t be a problem to assemble the IC’s with this customization.

With the basic design settled on I will soon begin working with SRM to have these intercoolers built and then I’ll be testing them to see if they meet my desires.

The drawing below illustrates the basic layout for these intercoolers.

The following dyno charts were recorded at APR during the tuning of the APR Stage 3 software on my S4.  The car was tuned on 91, 93, 100, and 104 octane fuels.  In addition APR made a water/methanol injection tune using 93 octane gasoline.

With the consistency of having the same tuner and the same car setup being recorded on the same dyno equipment it makes for a good illustration of what differences high octane fuel has in comparison to lower octane fuel aided by water/methanol injection.

The chart below compares the base 93 octane tune with the 93+water/methanol tune.

APR uses a Dynapack dyno so calling it wheel horsepower is not completely accurate since the measurement is made at the hub, but the horsepower increase is about 25 whp, increasing from 385 to 410.

The next chart shows the results of a tune using 104 octane fuel and no water/methanol injection.

Water/methanol injection involves multiple variables and if time had permitted to evaluate alternative configurations it might have been found that another combination of factors resulted in higher performance from the 93+w/m fueling setup.  Water/methanol ratio, volume of injected fluid, location of the w/m nozzles, fineness of spray, all could have been changed.  Additionally, how aggressively APR tried to tune the water/methanol setup could have closed the gap between the two options.

I am doubtful that any of those changes would have bumped the 93+w/m numbers up from a 25 hp gain to 85 hp so that the two alternatives were equivalent.

The real question is, what to do to complement the RS4 cylinder heads.  My current thought is to shoot for something in the 550whp range on the smallest turbo I can manage to hit that goal with on pump 93 octane fuel and a water/methanol injection system. 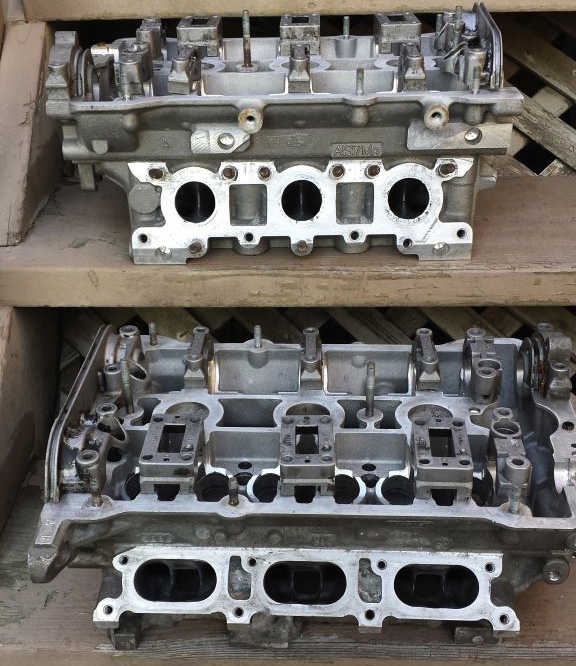