Now that I’m able to drive the Nogaro enough to get it out of the garage and into the driveway I decided to take a break from the wonder of dealing with that car. 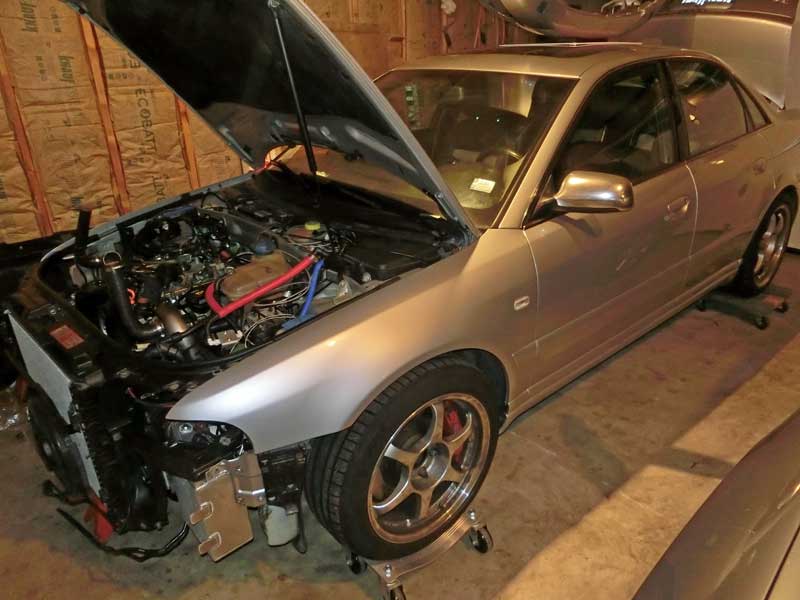 I brought my Silver S4 in and will be swapping back in the BorgWarner K04’s so I can continue recording some performance data that I did not collect the last time they were in the car. 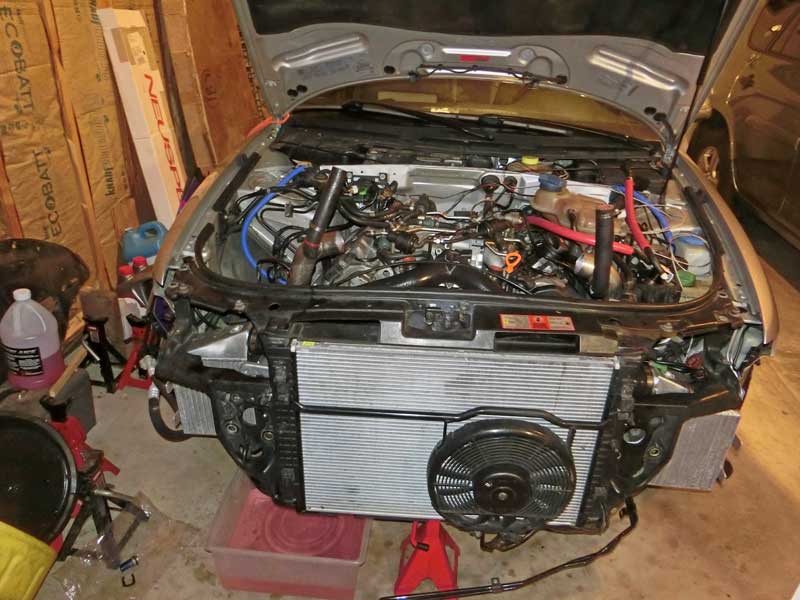 I’m enjoying taking the car apart and not encountering any surprises.

After some substantial troubleshooting of the starter I think I’ve finally resolved the intermittent start problem.  My best guess as to the fault was that the grounding wire that runs from the engine block to the frame was not making a good connection.  I say this because I hooked a jumper cable from the battery negative terminal to the lower bolt that holds the starter motor in place, and with that connection made the car starts fine.  I did a bit more monkeying around with the various connection, including the one from the engine to frame, and since then it has started as expected.

Getting this abomination of an exhaust on the car continues to be an exercise in aggravation.  The mega-can at the end of the exhaust is such a large diameter I had to rummage through some long bolts that I have to find one that reached from the exhaust hanger to the car.  Then the midpipes are slightly off on the driver’s side, this doesn’t come as a surprise since I cut a section of the exhaust out, but I’ve now made it challenging to find a suitable piece of piping to join the two section together.

Upon initial startup I received a couple caution indications, the washer fluid low and the brake pad wear sensor.  There’s no fluid in the washer reservoir so that was no surprise, and as for the pad wear sensor I’m pretty sure it’s a bad sensor as there’s a good amount of brake pad left.  I was glad that the oil caution did not come on, amazing how that works when you attach a wire to the sensor.

The first start led to an open circuit fault on cylinders 4 and 6.  I pulled off the injector adapters and reseated them which seemed to help since during the next run the faults did not return.

I logged the O2 sensors since I am suspicious of how well these generic sensors will work.

That’s not good.  Looks like I’ll be yanking the passenger side and sticking in a replacement.

After yesterdays non-start event and my suspicion that the Starter motor might be faulty I decided to pull the starter out and do a ‘bench’ test on it.

I pulled together some suggested steps for the procedure and commenced removing the starter.  After extracting it I conducted the bench test:

Looks good.  So much for that hypothesis.  I’m now wondering about the starter engagement with the engine, but I’ll do some more troubleshooting and see where that leads.  For the time being I get to have fun putting the starter back in place.

What follows are the steps I took to remove the starter motor.  These were provided by Audizine forum member DxC.  The only deviation I performed was to do step 10, removing the IC hardpipe, after step 5.  Getting the IC hardpipe out of the way earlier just made more room to get in where I needed.

Reinstallation is reverse of removal 🙂