This is an effort to see what results pre-turbo water injection produces on my Audi B5 S4.

I began by swapping the line out of the Aquamist flow sensor for a smaller line that would connect to the y-pipe. 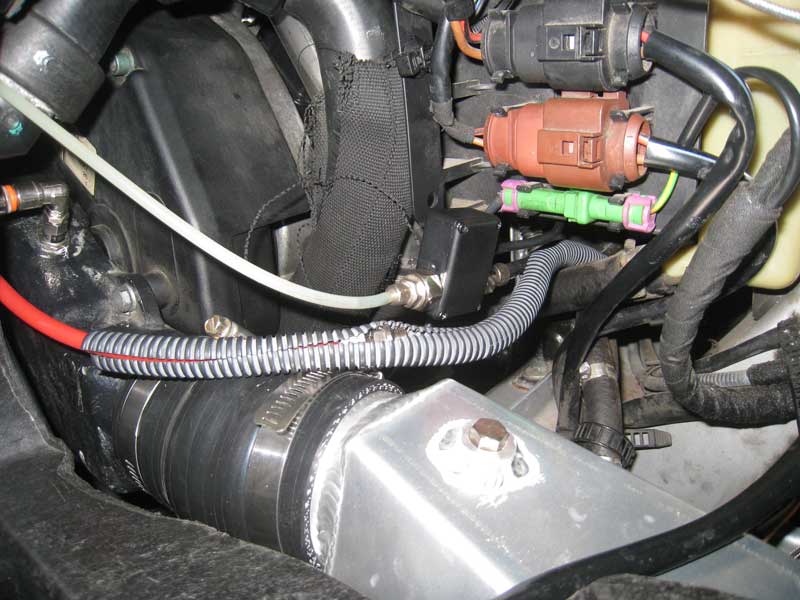 Next I worked with my stock y-pipe, one that I’ve messed with before, to make some more modifications to. 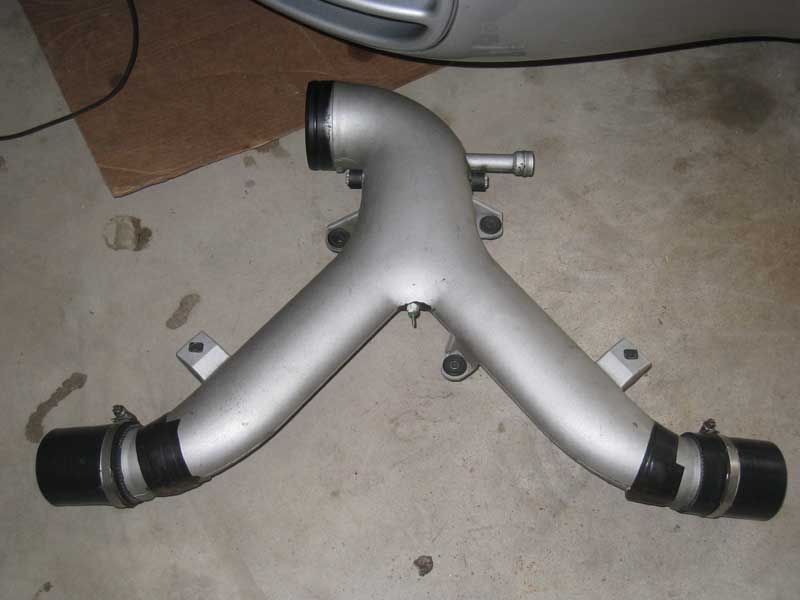 I added an Aquamist nozzle (0.5mm) to the middle of the y-pipe. 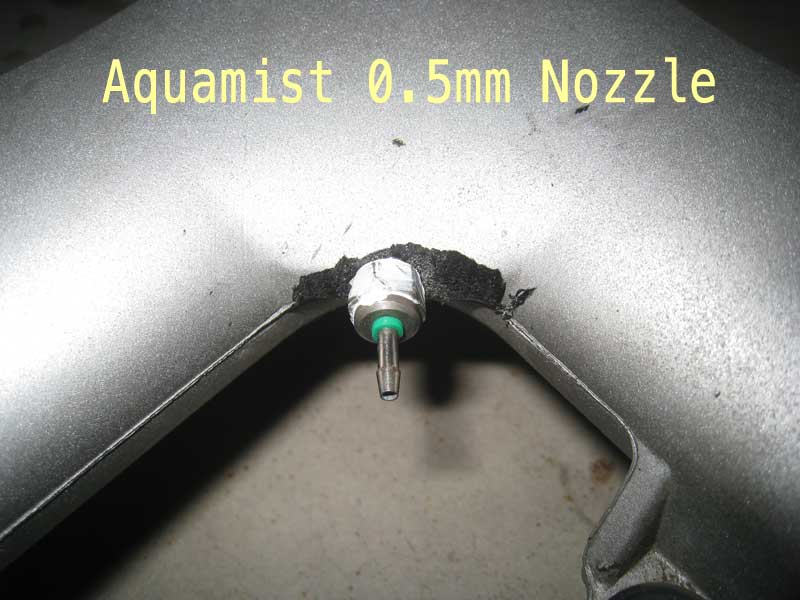 I went with this location to try and evenly distribute the spray between the two outlet pipes.  I also wanted to try and minimize the amount of wall wetting that would occur.  To that end I placed the nozzle in a position where the spray pattern would be into the airstream in the opposite direction of the airflow.

Then I hooked up the pump to make sure the system would spray.  The video below shows the outcome of this test.

The amount of water running out of the y-pipe, versus exiting as a spray, caused me some concern.

To get an idea of what was happening I removed the nozzle from the y-pipe and allowed it to spray unhindered into the air.  This is shown in the video below:

While I cannot see what is taking place within the y-pipe, it’s a decent guess that the wide angle of the spray cone is causing a good amount of water to be sprayed onto the walls where it coalesces and then runs to the bottom of the y-pipe.

Now I had some additional questions, would this stream of water make it to the turbocharger compressor blades?  I purposefully put the injection point in the y-pipe to create a longer path for a water stream to travel. 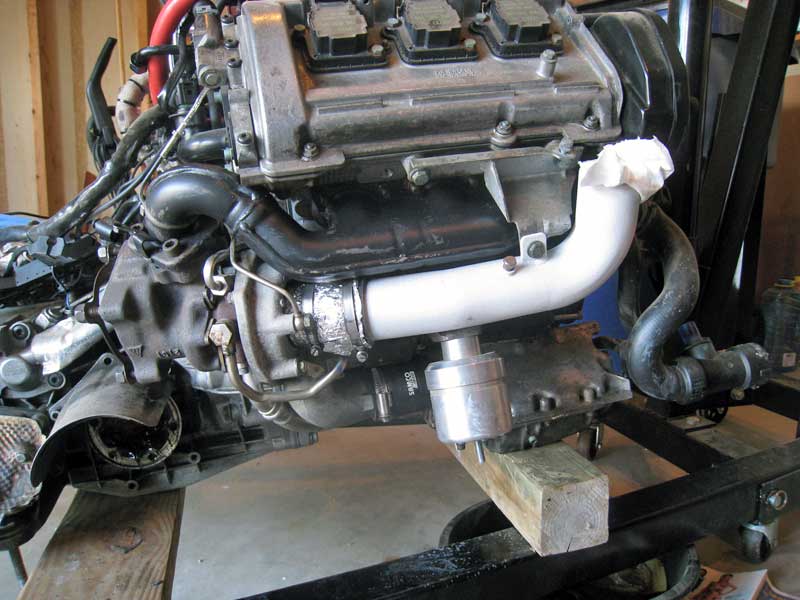 There’s a reducer between the turbo inlet pipe and the compressor housing which may provide enough of a rise to keep any standing water from being ingested by the compressor blades.

Another question is how effective is the water injection if the quantity of fluid I saw rolling out of the y-pipe is indicative of what happens when the system is operating on the engine?

To try and assess if moving air would produce much different results I hooked up a fan to the y-pipe inlet. 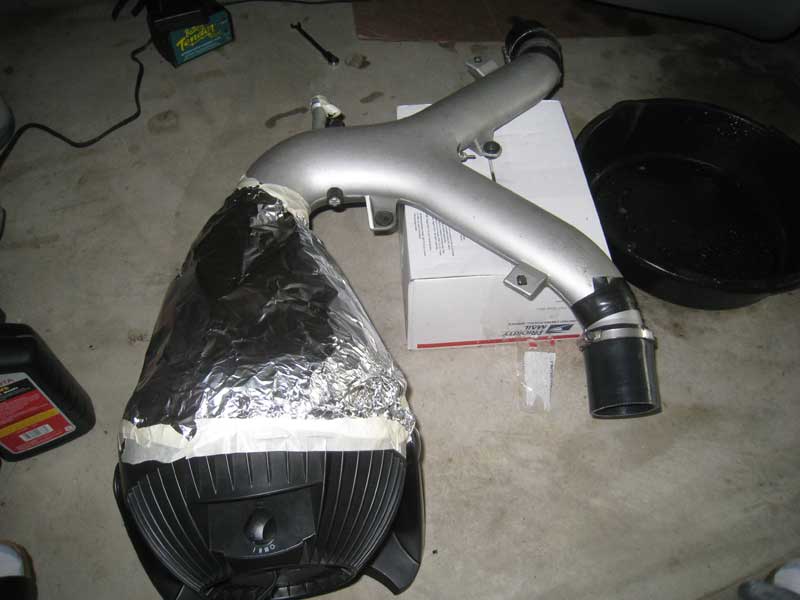 Because I had not been collecting the run-off water I did not have a good method for assessing if the airflow made much of a difference. 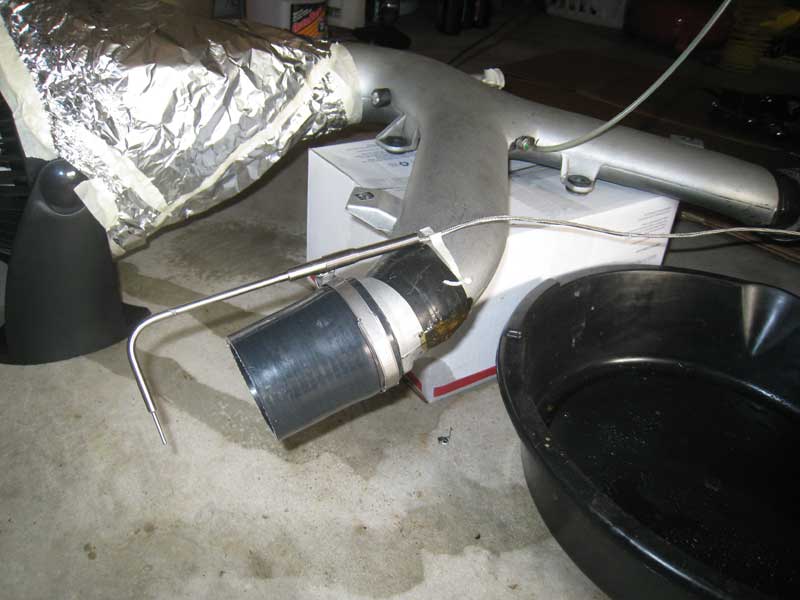 I ran the water spray in conjunction with the fan and recorded the following change in temperature. 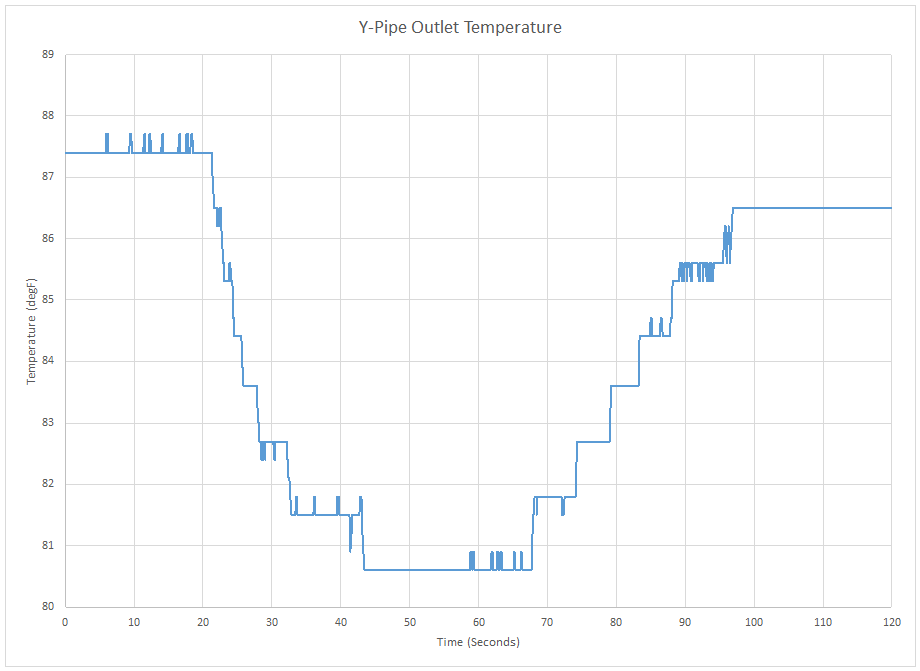 The temperature does not return to the starting level, which I suspect is a result of excess was in the piping still cooling the passing air slightly.

I feel that with the insights I have gained through this experiment that pushing forward with the evaluation is appropriate.  The amount of wall wetting that occurs does lead me to wonder how effective the bipipe installed nozzles work relative to a more idealized setup.

I may investigate an alternate setup for the nozzle to try and get better mixing.  See the next post in this series.

The Intercooler end tank nozzle mounts that I had requested from SRM were an idea for achieving more thorough mixture of fluid and charge air.  I will be considering these results when I get around to evaluating the alternative, SMIC, nozzle location. 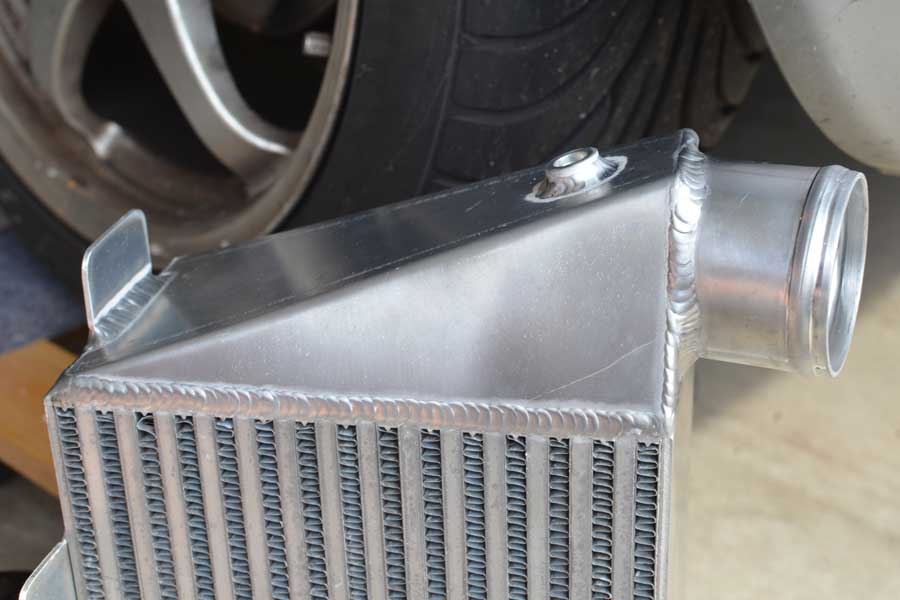 During the course of the S4 community tune efforts a couple other cars that tried using the tune I am helping to develop experienced over-boost on the initial ramp up.  The immediate action was to lower DIMX on their tunes to try and bring the boost curve closer to what I was experiencing.  This left unresolved the question of why we were seeing different boost profiles when using the same tune.

I recalled a similar occurrence when I had APR’s Stage 3 kit and I was comparing my results to a couple other cars that were equipped with the same kit.  As in the case of the S4 community tune the APR tune had been built on my car, and other cars would occasionally see boost overshoot on the initial boost ramp up.  It was discovered at that time that the setting of the N75 valve on my H-box car was quite a bit less aggressive than the A/M/T box cars.  This was determined to be a logical cause for the over-boost seen with the other cars.

After contacting the owners of the other cars involved with the S4 community tune we took photographs of our respective N75 valves and compared the setting.  Again, as in the past, the setting on my car’s N75 valve was a good bit less aggressive than the other cars.

While this investigation is presently incomplete, it appears to be a good lead into the cause for the disparate boost ramp-up curves between my car and the other two.

I dug up a spare N75 valve that I have and worked on changing the setting to try and increase the rate at which the boost ramps up.  I vaguely recall that the adjustment screw may be fixed in place with loctite, because getting it to budge took some effort.

After making the adjustment I am now more closely set to the two other cars.

After installing the N75 valve with the updated setting I took a drive and logged the boost onset.  Shown below is the difference between the previous setting boost ramp up, the solid line, and the new boost ramp up with the more aggressive setting that mirrors the other two cars, dashed line.

My car is now over boosting initially, unlike prior to adjusting the N75 valve.  This is a great result because it will enable me to make tune changes that will hopefully produce similar outcomes amongst the three cars involved with the tuning project.

Continuing the effort to be able to record the MAF sensor correctly I have begun to try and modify an engine harness and OBD port to use on the flow bench. 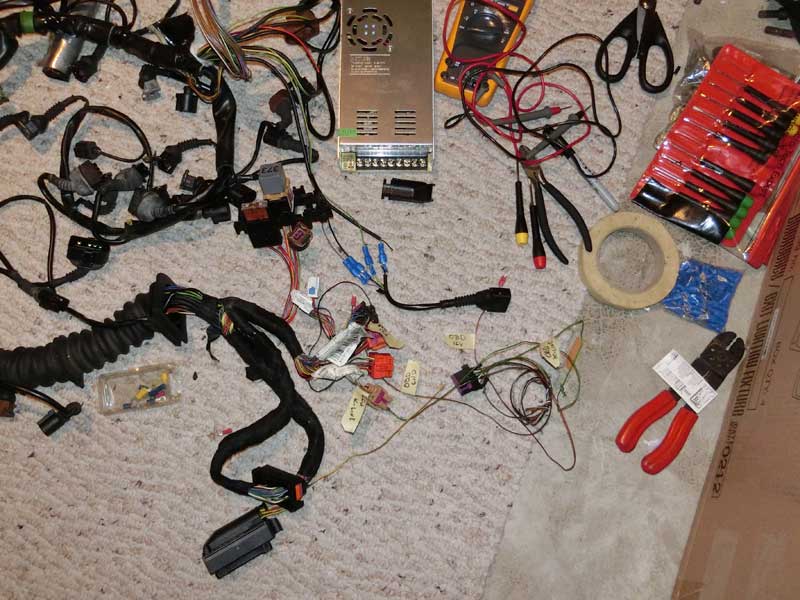