After lowering the subframe down it was necessary to raise the rear of the car high enough so that I could pull the subframe back and have the rear uprights clear the rear portion of the wheel well. 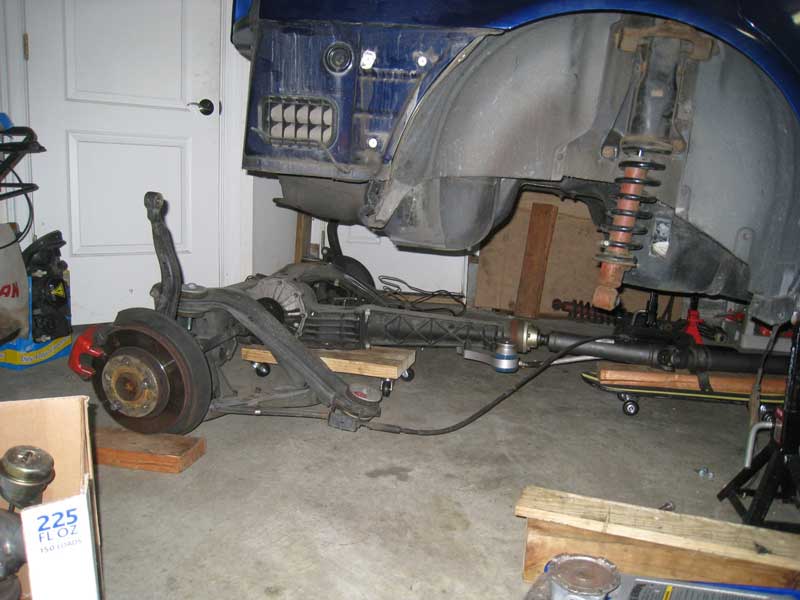 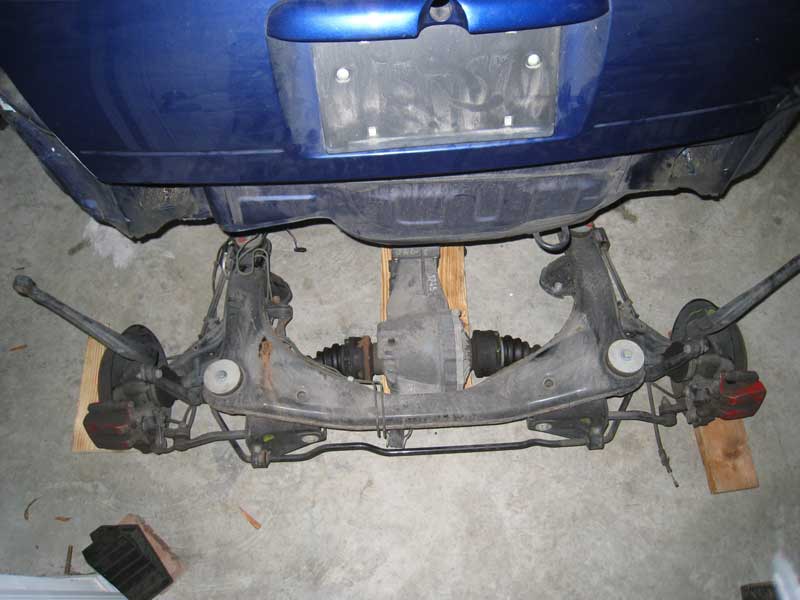 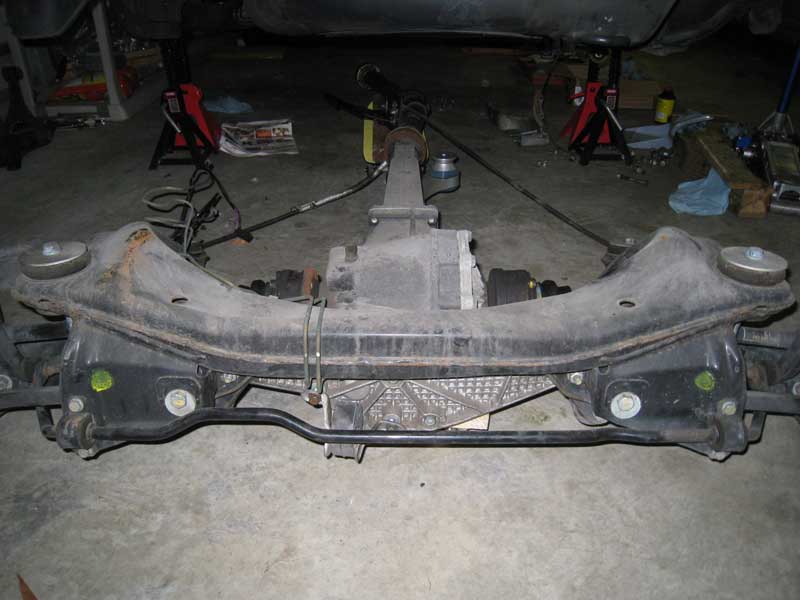 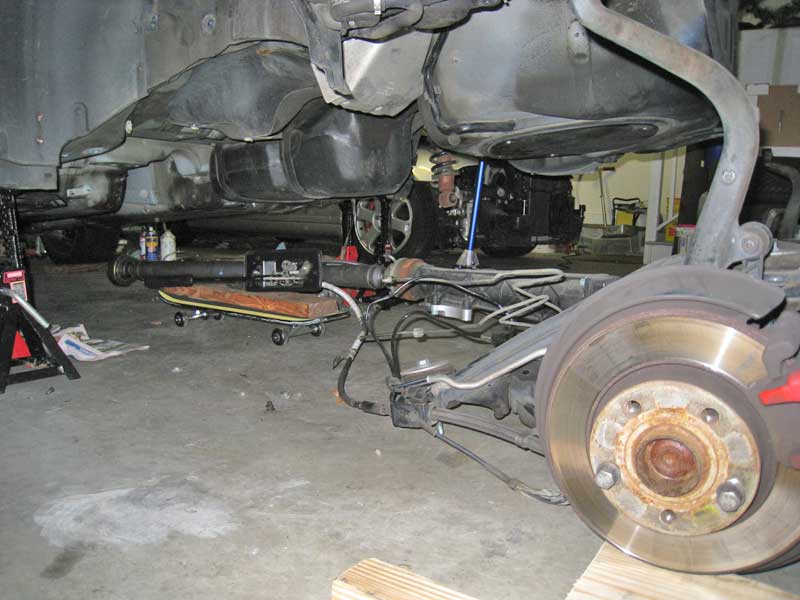 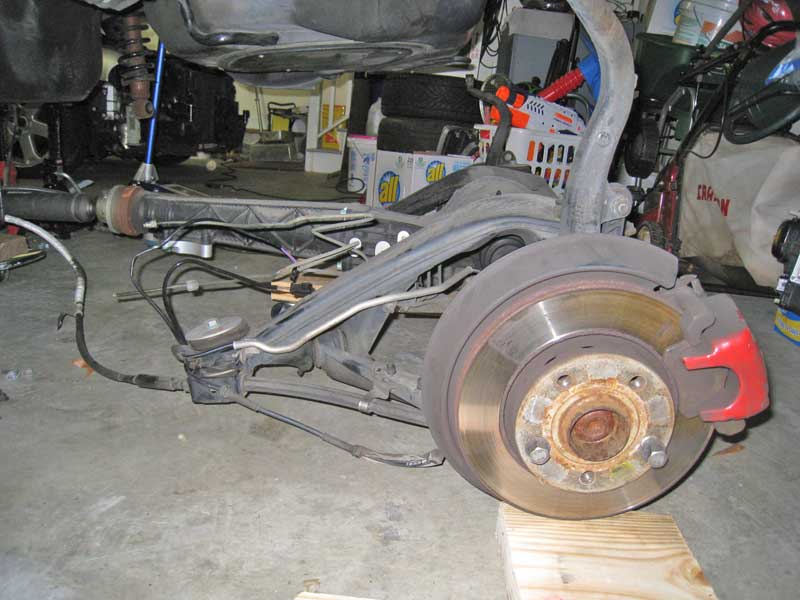 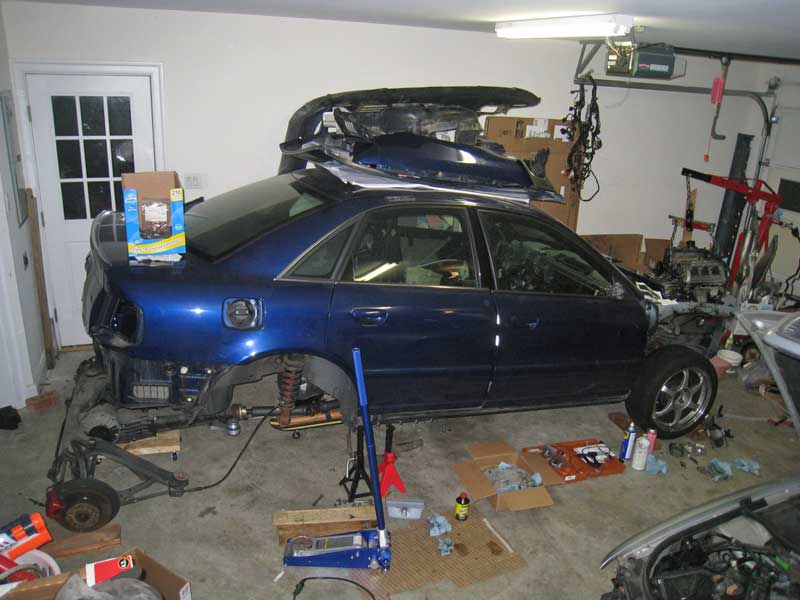 With the subframe ready to be moved over to the Silver car I addressed another small issue on the Silver car.  The water temperature gauge had not seemed to move at all the one time I had the car running for more than a minute or so.  I thought perhaps the coolant temperature sensor was bad so I decided to remove the sensor from the Santorin car’s engine and put the sensor in the Silver car.  Getting the sensor out of the Silver prove to be a bit of a challenge.  After getting enough parts out of the way to have a clear shot at the sensor it took quite a bit of rocking the sensor back and forth to get it to break the seal with the coolant hard pipe and come out. 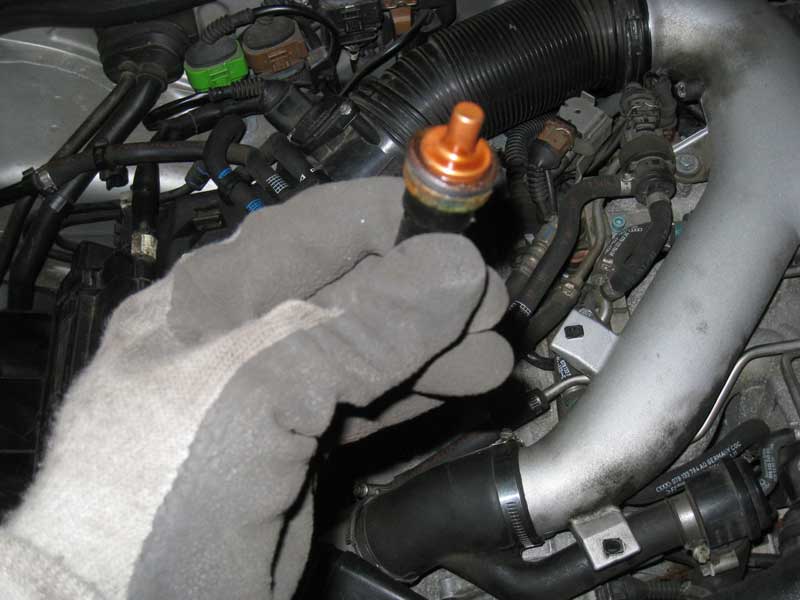 And the current state of the garage… 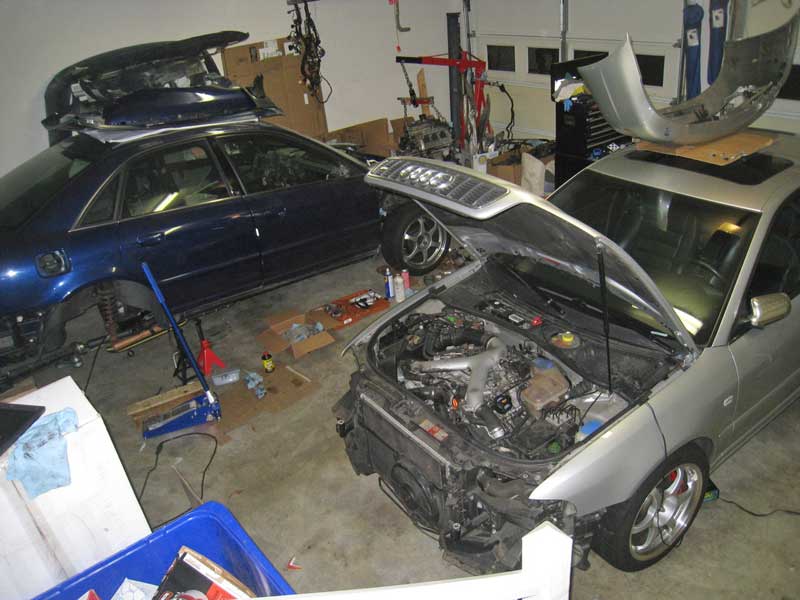 So far the following has been done:

I made the decision to remove the entire subframe from the Santorin car to transfer over to the Silver car.  It would be a bit of extra work but the benefit would be components that were nearly corrosion free replacing parts on the Silver car that showed signs of being driven in winter conditions for a few years.

Additionally I was going to need to remove the driveshaft and rear differential from the Silver car in order to move the 6-speed transmission over so this accomplished removing those parts from the Santorin car. 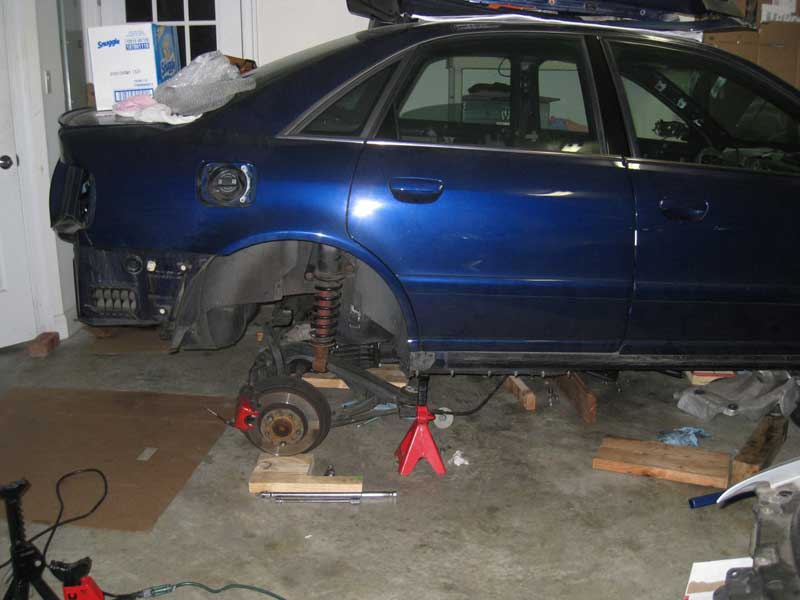 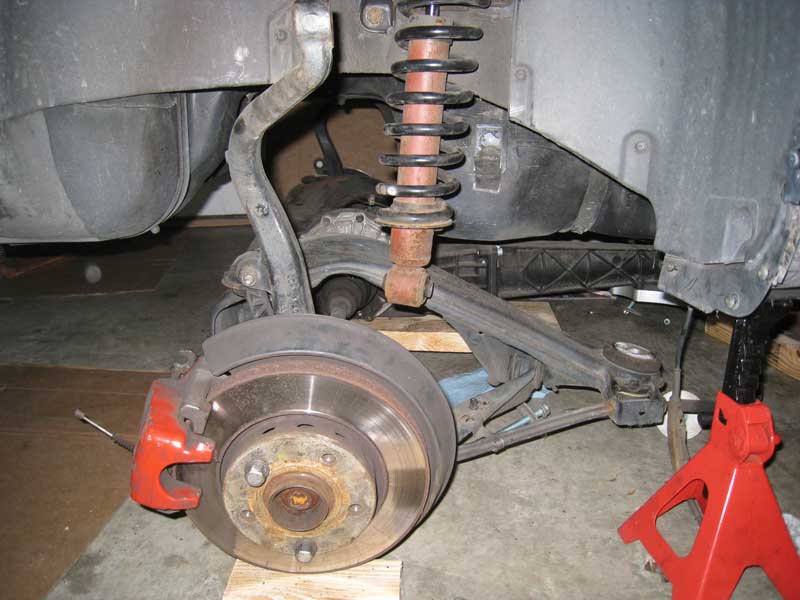 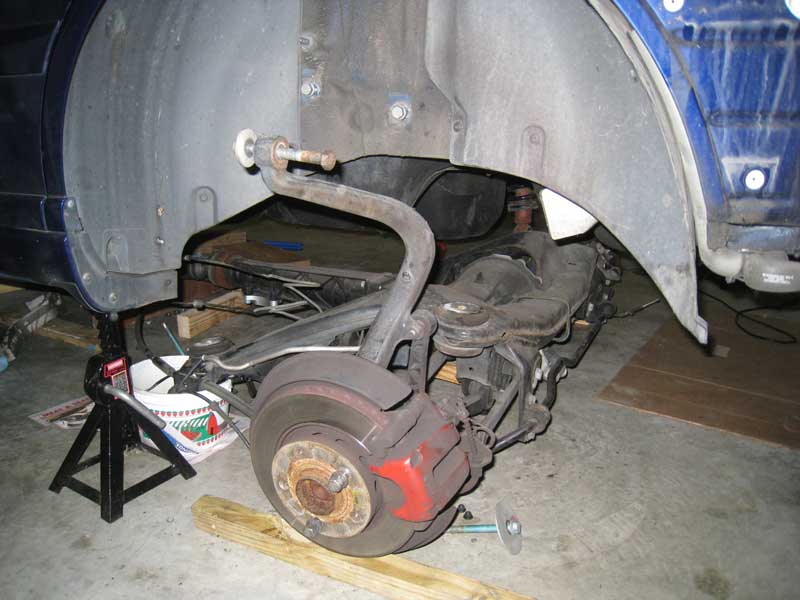 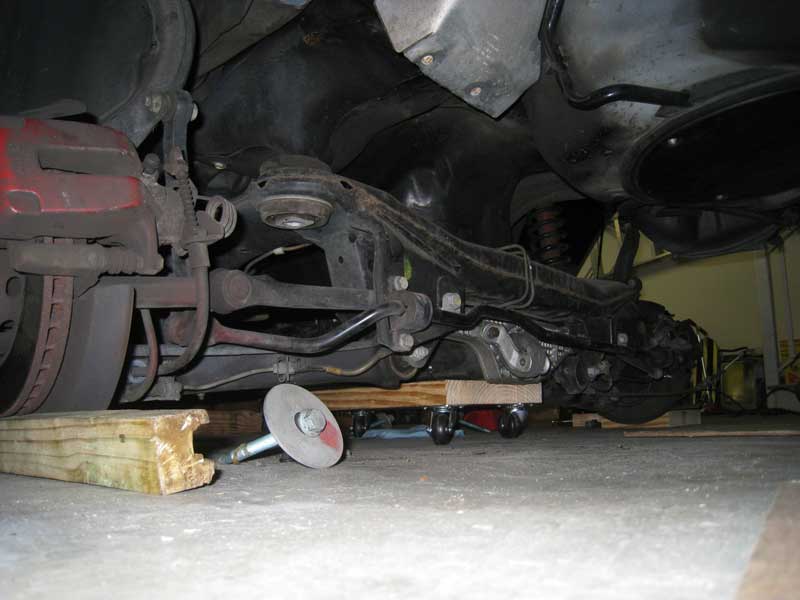 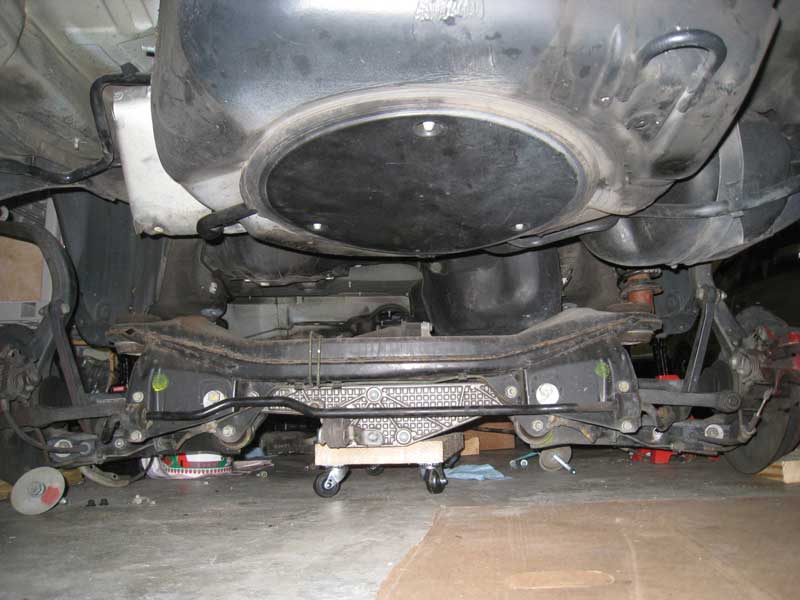 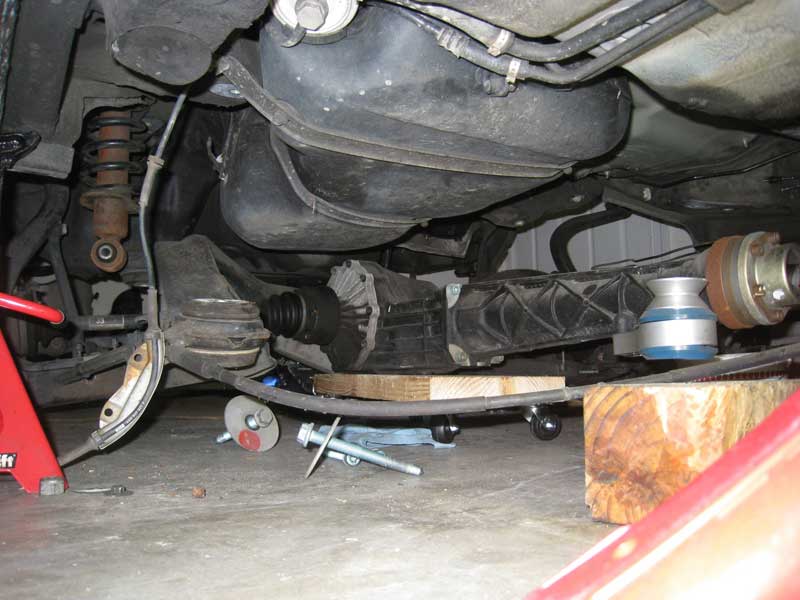 After completing the front end swap to both cars I moved to the rear of the Silver car to pull off the stock coilover. 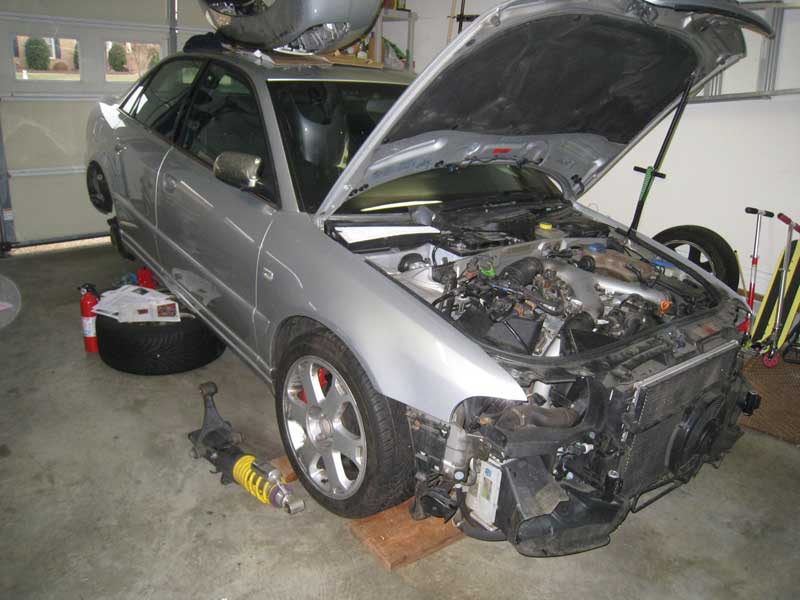 Then I moved to the Santorin car and removed the KW V3 from the passenger’s side. 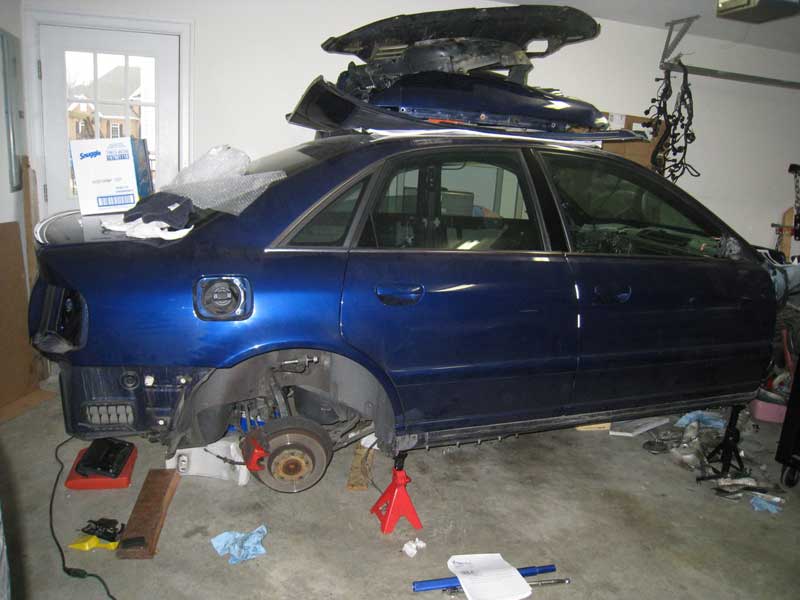 During the process of removing these coilover I began to debate the possibility of removing the entire subframe, so that the rear axles and differential along with the control arms and bushings could be swapped out.  The condition of the parts on the Santorin car being corrosion free made doing this swap appealing, but the potential challenges of dealing with the brake lines was a negative.  I’m still debating how to proceed.

At the front of the Santorin car I decided I’d pull the steering rack since it was readily accessible. 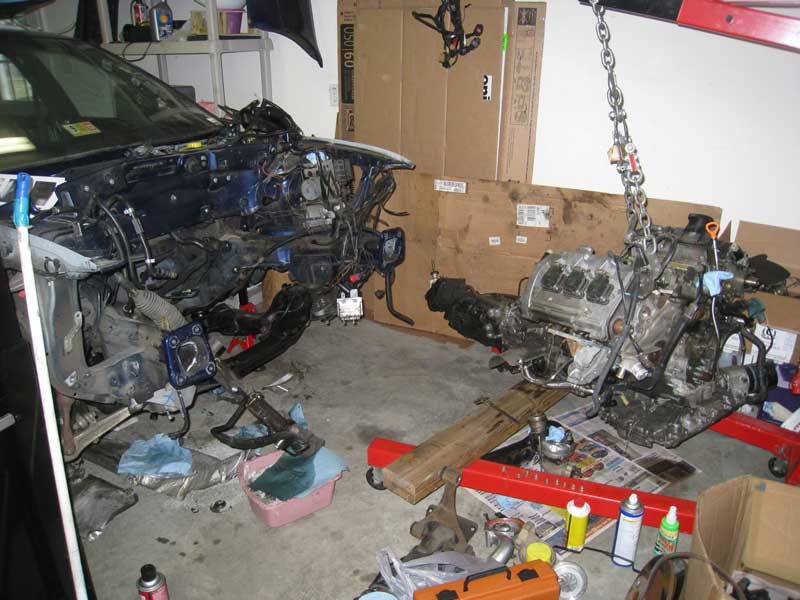 A replacement part arrived this week.  One of the car’s SSR Comp wheels had been damaged and I wanted to return to a full set.  I’d had a tough time finding anyone selling a single wheel, but I happened upon someone who had a set of three SSR Comps that they were having a tough time finding a buyer for.  I decided that having a lightweight spare wouldn’t be such a bad thing, and I’d have one additional wheel as an additional spare in case something happened to one in the future.  Here I’m test fitting the wheel to ensure it has the right size adapter ring. 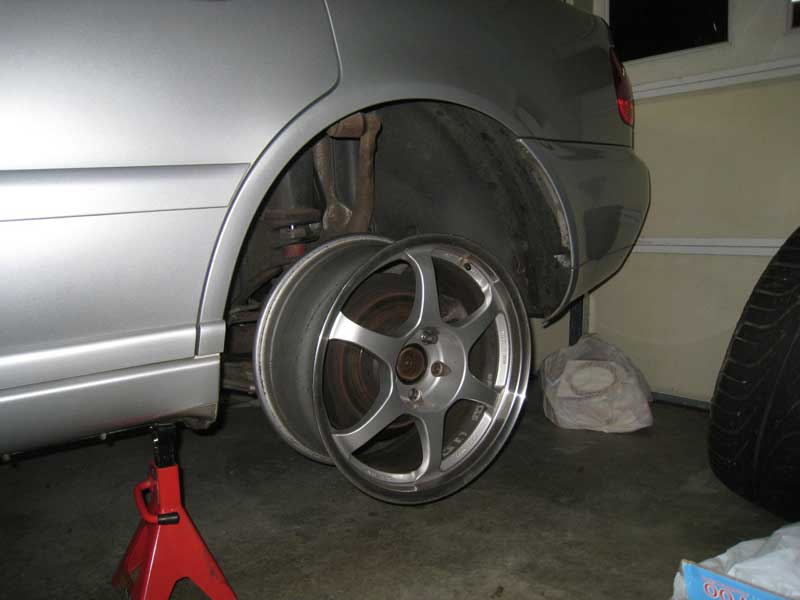