Interest in demonstrating a relationship between exhaust system back pressure and boost onset led me to run a test where I measured each while applying a covering over the exhaust pipe outlet. 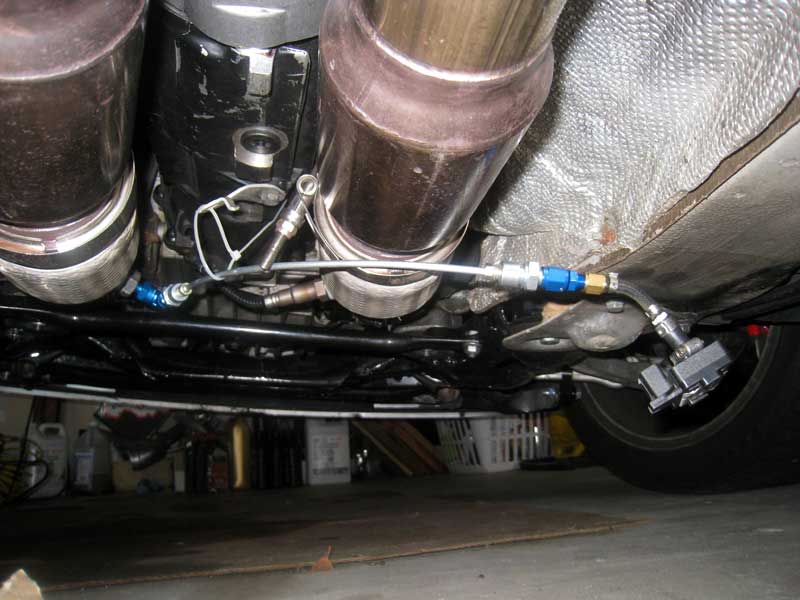 The stock MAP sensor was used to record Intake Manifold pressure and a 4 BAR sensor was connected to a fitting that reads exhaust pipe pressure at the secondary O2 sensor bung, which on my car is located in the downpipe prior to the catalytic converter.  The setup for reading the exhaust pressure is similar to what is shown above, though the picture was from a prior configuration, that I have since economized a bit so as not to be hanging down like the picture shows. 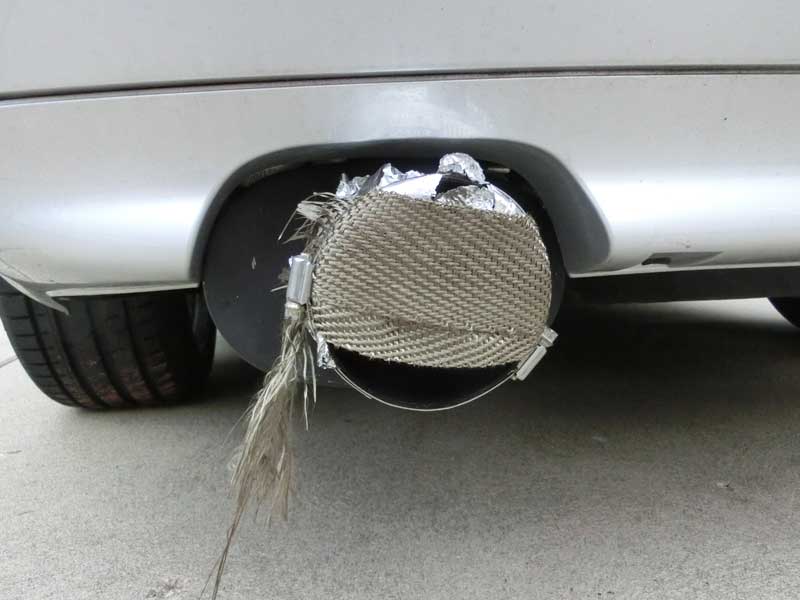 The cover consisted of a piece of heavy duty aluminum foil doubled over and then a piece of DEI exhaust wrap placed on top of the foil to create the seal with some reinforcement. 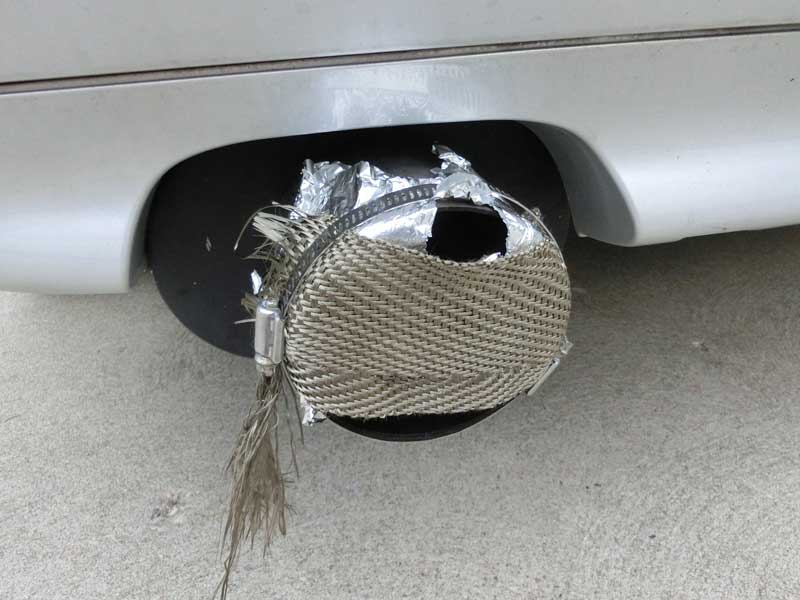 As the above ‘after’ photos show, the coverage of the DEI wrap was not complete, and there was sufficient pressure build up in the exhaust to rupture the foil cover where it was not reinforced.

The occurrence of the ‘blow-out’ is clearly indicated in the exhaust back pressure chart (below) that compares the fully open to 80% covered conditions.  The rising pressure suddenly drops quickly, then continues rising as engine speed increases.

Starting engine speed was 2000 rpm for three sets of measurements and then approximately 2200 rpm was recorded two times.  The intent being to see how boost onset was affected when starting at a higher airflow rate. 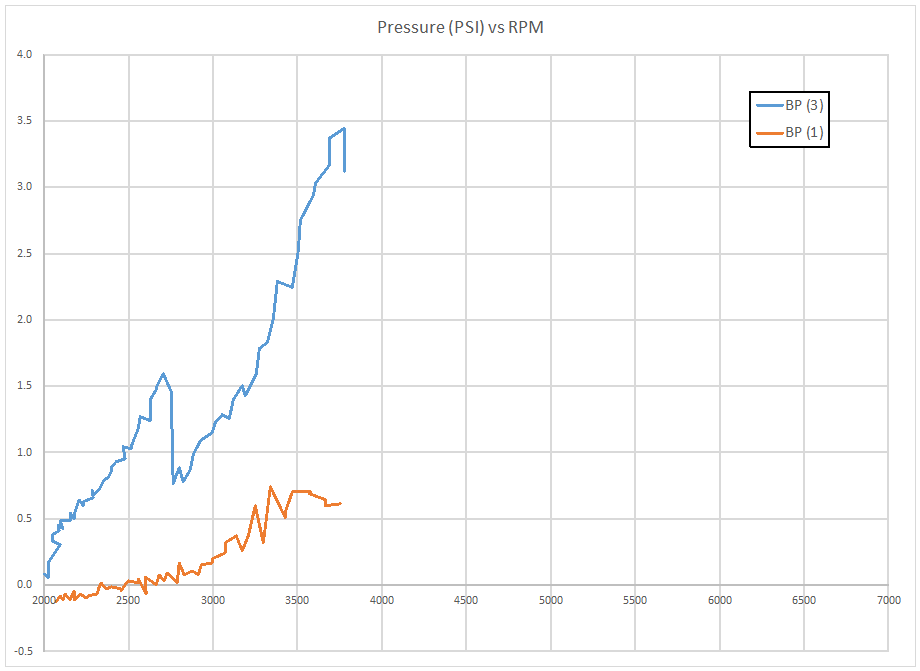 Above is the the same exhaust back-pressure data with the addition of the second and third 2000 rpm starting engine speed pulls.

Finally, shown above is the Intake Manifold Pressure for the two extreme test cases.

It is apparent that blocking off the exhaust will increase the back pressure in the exhaust system, and the increasing back-pressure causes boost onset to be slowed.

What is unclear is how representative the worst case test may be of alternative exhaust systems.  Without putting different exhaust systems on the car to record the back-pressure that they generate I cannot speculate as to how much back-pressure exists in other systems. 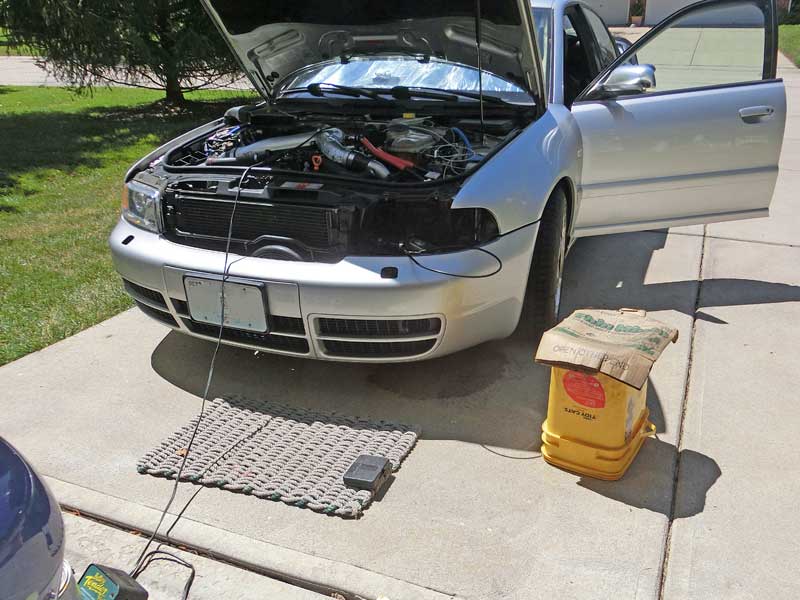 After installing the Aquamist 4mm nozzles I ran through a series of duty cycle checks to determine the true flow rate through the nozzles, albeit into atmospheric pressure instead of manifold boost.

I found that after approximately 70% duty cycle there was very little increase in flow rate through the nozzles.

With the change in flow rate that the 4mm nozzles caused, capping the maximum flow rate around 375 mL/Min., I updated the Torq Tune Pump Duty Cycle table.

The new table values put the pump at up to 100% duty cycle, and do so at 17-19 psi, whereas with the pair of 0.7mm nozzles I was running the pump at a maximum duty cycle of 45% and recording more flow.

After utilizing a pair of 1mm Aquamist nozzles with my BorgWarner K03’s, a case of overkill that resulted in some misfiring due to an unnecessarily high volume of fluid being injected into the engine, I scaled back to a pair of Aquamist 0.7mm nozzles.

At the same time I was also beginning to utilize larger turbochargers, thus getting closer to a proper matching of components.

I’ve been operating with the 0.7mm nozzles for a while and through the ability of the Torq Tune software to enable me to tightly control the injection pump duty cycle I’ve been able to find a DC that has been producing good results.

I have been wondering if running the pump at a higher duty cycle, but with a smaller nozzle, would keep a similar flow rate at a higher system pressure.  The thought being that I may be able to obtain better atomization of the liquid with the quantity of liquid remaining the same.

To try and see if this is a valid idea I’ve obtained a pair of Aquamist nozzles in the 0.4mm size.

I’ll be assessing the flow rate through these nozzles versus the pump duty cycle, and then it will be onto the street to see how the Intake Air Temperatures change with smaller nozzles, hopefully at a similar flow rate to what I have been operating the 0.7mm nozzles at.