Time to separate these two: 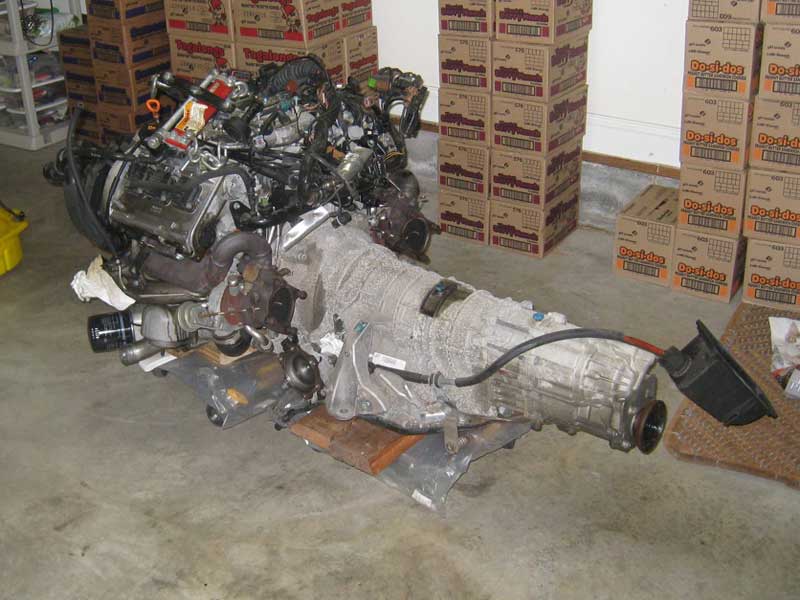 The trick is getting the Audi Torque Converter (TC) off, this guy: 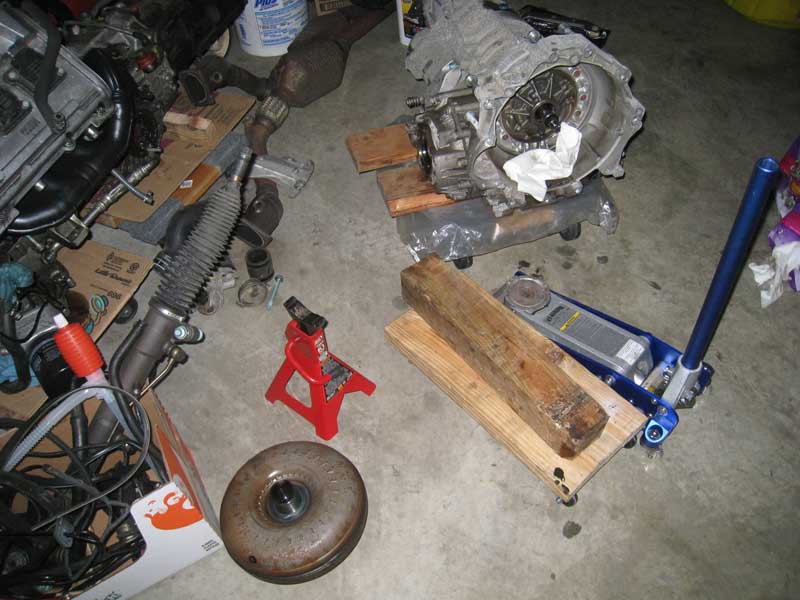 After removing the torque converter: 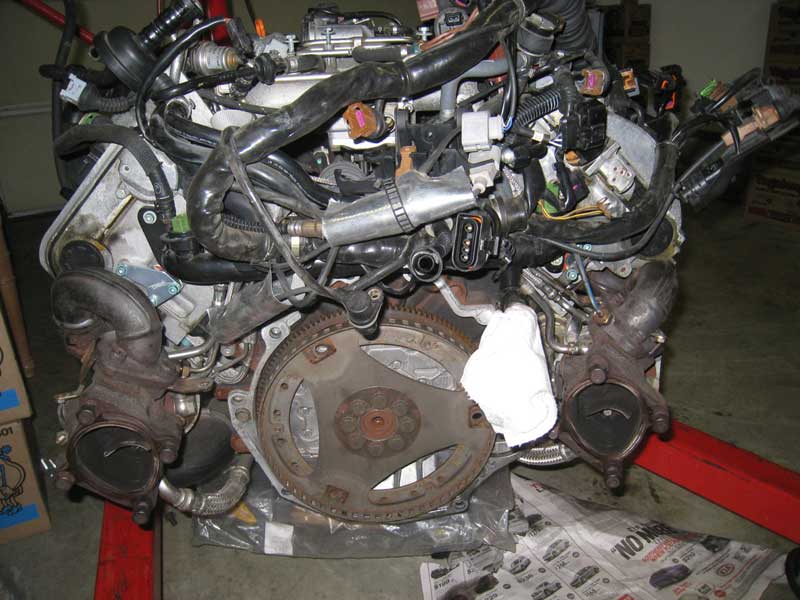 Alternator, starter, turbo outlet hardpipe all removed to gain access to the Torx bolt (3x) that needs to be removed to get the Torque Converter off: 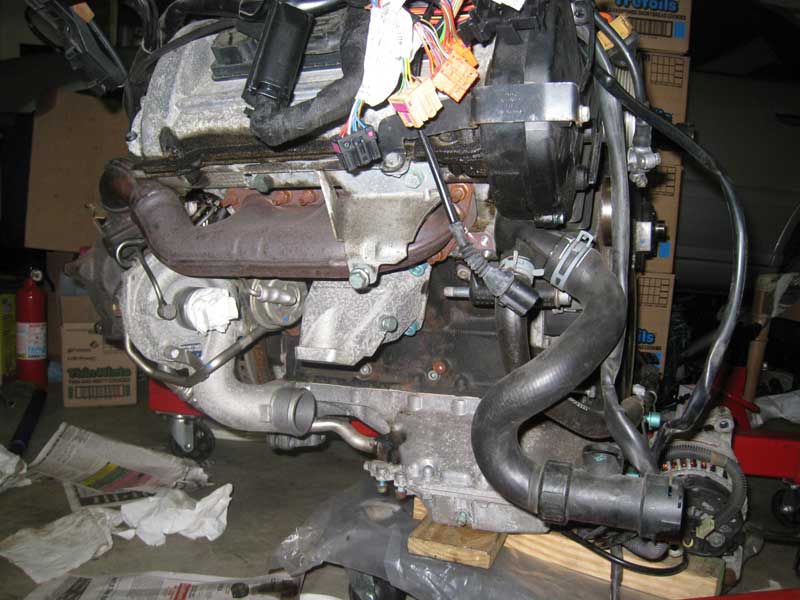 Taking the torque converter off was a bit more difficult than the Audi Bentley manual makes it appear.  There is a sight hole underneath the motor where the transmission attaches that allows a tool to be inserted.  I doubt this can be done with the motor in the car unless the subframe is moved, but I could be wrong.  Even having the parts out of the car trying to get the bolts loose via this access port was too difficult for me.  I could not get a good angle with the Torx bit and ended up breaking a swivel socket trying from this angle.

With the starter out of the way I was able to get a torx socket onto the bolt and apply pressure with a breaker bar.  There was quite a bit of force required to break the bolt free but it did.  After getting all three of the bolts broken free I removed the transmission.

I picked up another pair of dollies to make maneuvering the second motor around the garage a little easier.  They were on sale for $15 a piece which I think is a great price for the convenience they provide.  Without them I’d be doing a whole lot of swapping between motors with the engine hoist and that would be no fun. 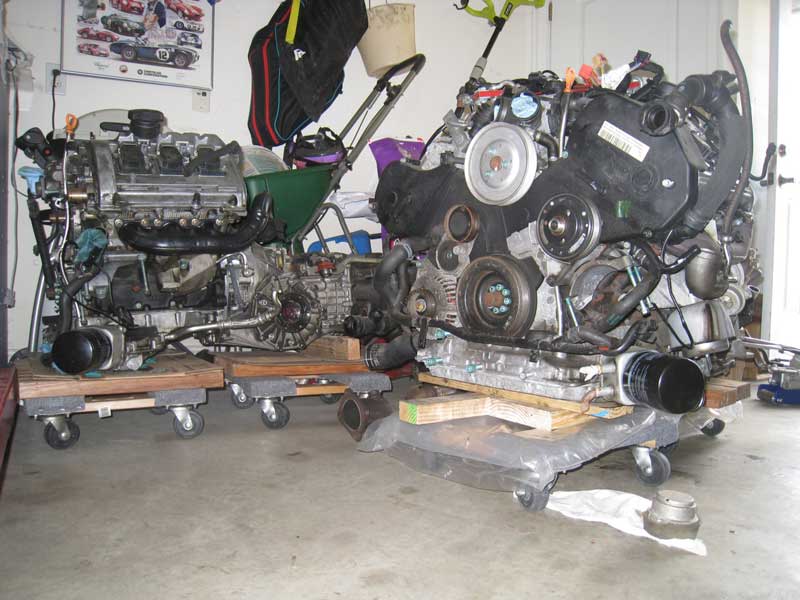 After a couple of days break I set back to working on getting the engine out of the Silver car.  There are a number of write-ups floating around about doing engine pulls, and since this was my fifth I figured I shouldn’t encounter much trouble.  The only thing was, all of the write-ups and all of my past experiences have been with 6-speed cars, there isn’t a whole lot of information about the peculiarities of a Tiptronic engine pull. 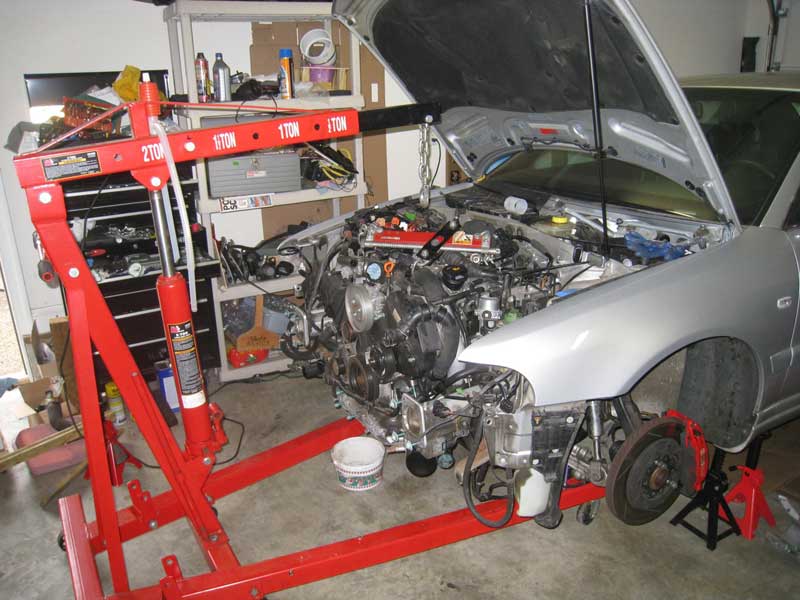 I did manage to find some conversations that discussed removal of a Tiptronic transmission and it gave me some ideas of what I might encounter.  The biggest problem was likely to be the front axles, apparently with the way the Tiptronic transmission is positioned, or the size, the process of lifting the motor and pulling the axles out below, as is done with the manual transmission, would be much harder, if not impossible with the Tiptronic transmission.  The recommended procedure was to loosen the lower control arms so that the axle could be freed up.  Since I’d just gone through the process of swapping the entire front suspension from one car to the other I knew I could do this, I just didn’t want to.

I decided that I’d start pulling the motor out and see what happened, figuring if at some point I got stuck I could always remove the lower control arms and fish the axles out that way.  It turned out that pulling the axles out beneath the engine was not going to happen, at least I wasn’t willing to try and hoist the engine high enough in the air to get the clearance I needed.  Fortunately after getting the motor a couple of inches forward there was a little bit of space on the drivers side where I could push the transmission end of the axle into, then I was able to pull the other end out of the wheel hub and the axle came out.  With the driver’s side out I could then push the engine and transmission slightly over to the driver’s side, making some extra space on the passenger side.  That extra space was needed, because even with it there was quite a bit of maneuvering necessary to get the passenger side axle out.

Finally the Tiptronic motor was out and now I have to get the 6-speed transmission swapped over and then reinstall the motor. 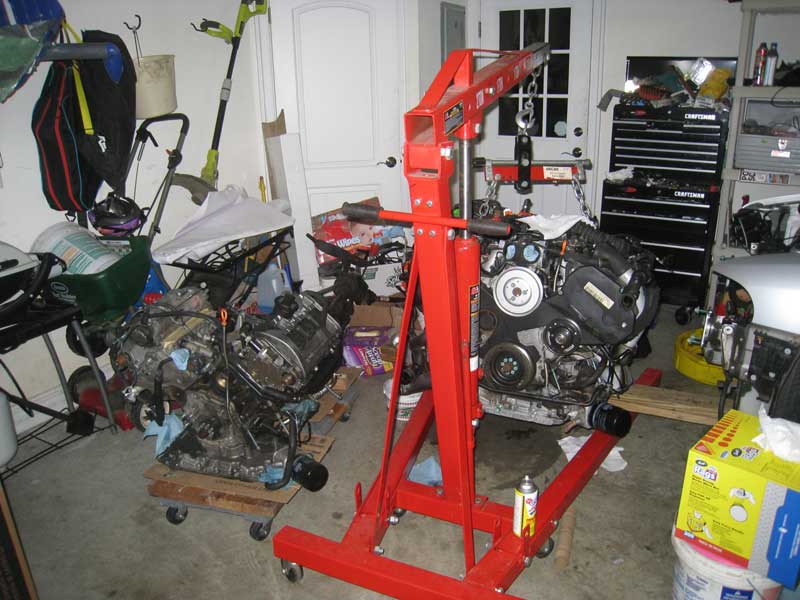 With the motor out I’ll spend some time cleaning up the engine compartment some and also doing the prep work for making this Tiptronic into a manual 6-speed. 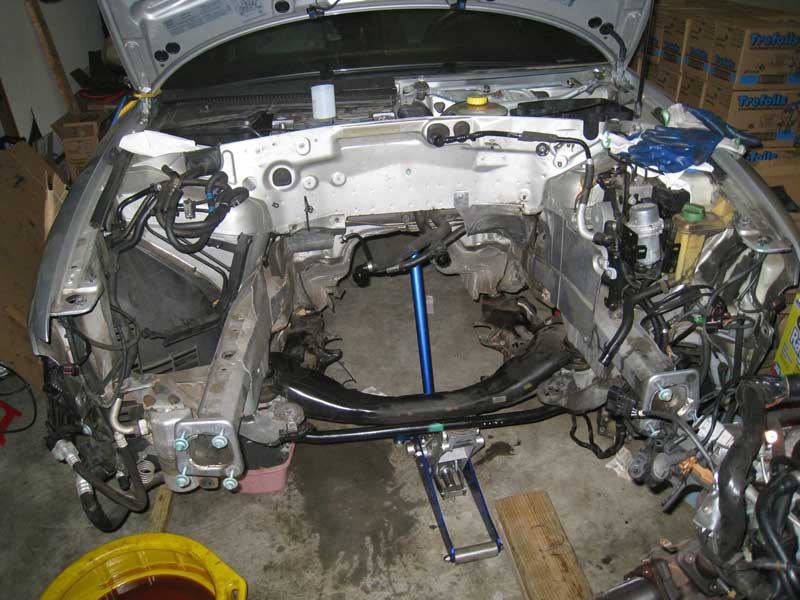