A question that came up since the last flow test was performed.

One question was the amount of change that might be seen as a result of hooking up the inlet and outlet piping to the intercooler.  The difference would be dependent upon the design of the piping, so hoses like the stock drivers side which have a significant bend to them would have more impact than some of the aftermarket designs that have been better optimized.

Because there are various types of hoses and hard pipes used, and I was receiving products to test from other owners that did not always include all of the piping, I decided to limit the published results to comparing the intercooler cores and end tanks absent the connecting piping.

In the cases where I did have additional piping I sometimes did comparison tests to see how the product performed with a hose attached.  Results were generally within 5 cfm of the case without the hose, showing that the hose did have some affect.

Here are some comparion pictures of the Apikols and ER’s.  Both intercoolers have similar size cores though the number of charge rows, fin density, end tank design, and inlet/outlet diameter differ. 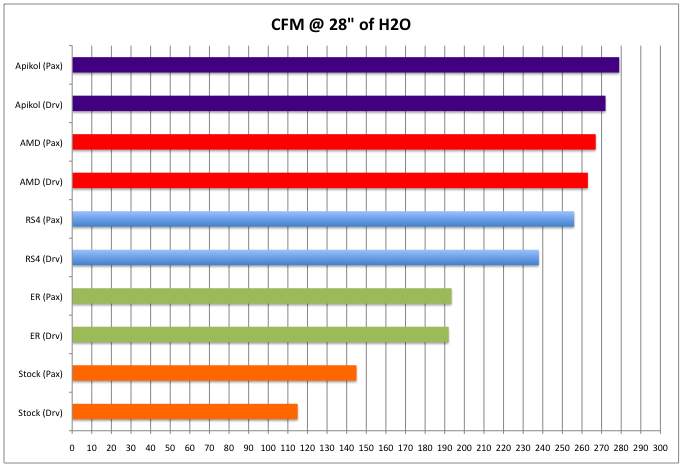 It’s rather interesting to look at some of the match ups of intercoolers and assess the differences in performance and try to determine what design factor led to the difference.

At the outset I was anticipating that that Apikol IC would have a flow rate very similar to the ER.  The core sizes are nearly identical and I didn’t think the slightly largerinlet/outlet pipe diameter of the Apikol IC would make a large difference.  As the results showed the Apikol IC was able to flow a substantial amount more air at 28″ as compared to the ER.  Looking more closely at the design of the Apikol core I believe a possible explanation for the difference lies in the choice of using 12 charge rows with the Apikols versus 15 for the ER’s.  When the two intercoolers are laid side by side it is very evident that the fin density of the ER’s is greater than the Apikols, and the width of the charge row is larger on the Apikols.  With a larger path to flow through, and apparently less of an internal fin density, the charge air is not impeded as much passing through the Apikol core as through the ER core.

The flip side to the reduction in pressure loss through the Apikol core is very likely a less effective heat transfer function as compared to the ER core.  As has been pointed out in the previous test cases, pressure drop and temperature control are tradeoffs, improving one will likely hurt the other.

Another interesting comparison is between the Apikol and AMD intercoolers.  The flow rate between these two is nearly identical, there’s a 15 cfm difference on one side and 5 cfm on the other.  Given the smaller inlet size of the AMD IC it’s possible the inlet was the only thing causing a difference in flow rates.  Despite having nearly identical flow rates the two intercoolers have substantially different designs.  The Apikol is a narrower frontal area compared to the AMD, fewer charge rows, 12 versus 17, but deeper.  In the end, even with the design differences flow rate was about the same, it will be interesting to see how these two design approaches fair in controlling temperature rise.

More physical comparisons between the Apikol and ER

I wanted to measure some of the other differences between the Apikol and ER intercoolers since for the moment they represent the two extremes of intercooler performance, the Apikols with the top flow numbers and ER’s with a history of being the temperature control leaders.

As for the width of the fin rows the Apikol width is greater, measuring 11 mm across compared to the ER fin width of 6 mm.

Next I counted the number of fin cross members, the thin section of metal spanning the flow channel.  The Apikol’s had 111 compared to 177 for the ER’s.

What I find particularly interesting is that the charge rows are equal in external dimension, the Apikols have 3 fewer charge rows, yet the Apikols outflow the ER’s by a good amount.  Perhaps the internal fin density of the ER’s is greater, unfortunately making that comparison isn’t something I will be able to do.