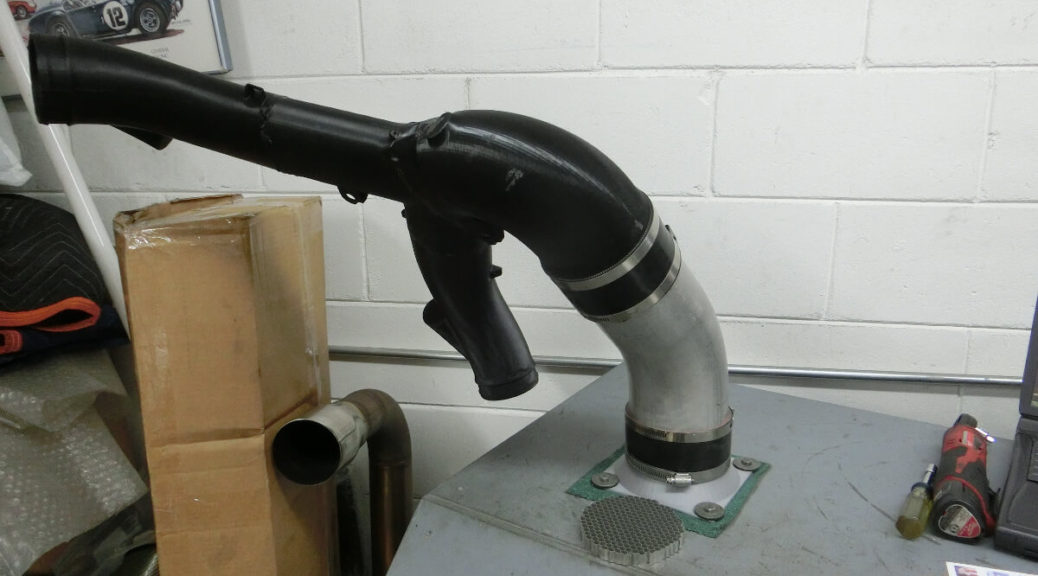 It’s been some time since I tested any parts for the B5 S4 but when I was contacted by Torque Factory (TF) Consulting wondering if I would be willing to flow test a Y-pipe they are developing I agreed to.

Previously I have tested the stock S4 Y-pipe as well as the B5 RS4 Y-pipe. For this test the products would consist of the Torque Factory prototype as well as The Tuner Y-pipe.

Two MAF pipes were supplied, one 4″ and the other 4.5″ in diameter. The 4.5″ pipe contains a removable flow straightener.

Because these products are larger than the S4/RS4 parts I have previously tested I needed to make a new adapter to attach the products to the flow bench.

3D printing comes in handy for creating the adapters needed to join parts with the flow bench.

A MAF sensor is installed in the MAF pipe and the PCV port on the Y-pipe is blocked off.

The previous testing with the S4/RS4 Y-pipe had been performed at a depression of 10″ of H2O. I found with the larger components used during this test that the flow limit of the bench, roughly 650 cubic feet per minute (CFM), was being met before reaching 10″ of pressure drop through the test article.

For this reason 6″ of H2O was chosen as the default test depression for taking measurements.

Several combinations of Y-pipe and MAF pipe were flow tested.

The table summarizes the readings for each of the combinations tested:

This data is presented in bar chart format along with the measurements for the S4 and RS4 Y-pipes:

A calculation can be made with the measured data to predict the airflow at a higher depression than what was tested.

Because the S4 and RS4 Y-pipes were tested at 10″ of H2O an extrapolation is made with the data for the Torque Factory and THE Tuner Y-pipes to estimate what they might flow at a depression of 10″ of H20.

The predictions are shown on the chart below, represented by the segment of the lines that are dashed.

A flow bench test was performed to measure the airflow through different combinations of Y-pipe and MAF pipes using a Torque Factory Consulting prototype Y-pipe and a production version Y-pipe manufactured by THE-Tuner.

Comparing the results of this test with previous results using the S4 and RS4 Y-pipes both the Torque Factory and THE-Tuner Y-pipes flowed significantly more air at the test depression.

Of the various combinations tested, the Torque Factory prototype using a 4.5″ MAF pipe without a flow straightener produced the highest airflow, 686 CFM @ 6″ of H20.