The changeover to utilizing the Avant S4 as my sole B5 S4 vehicle going forward was brought to completion this morning.

The Silver Sedan drove out of the neighborhood this morning with a new owner, and a chase vehicle to accompany it on a 6 hour return trip to its new home.

After 4 years and 4,000 miles the former bone stock Tiptronic that I acquired from an Insurance Auction 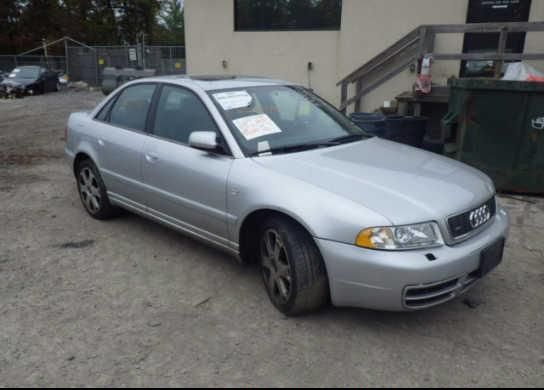 leaves my care as a slightly modified 6-speed. 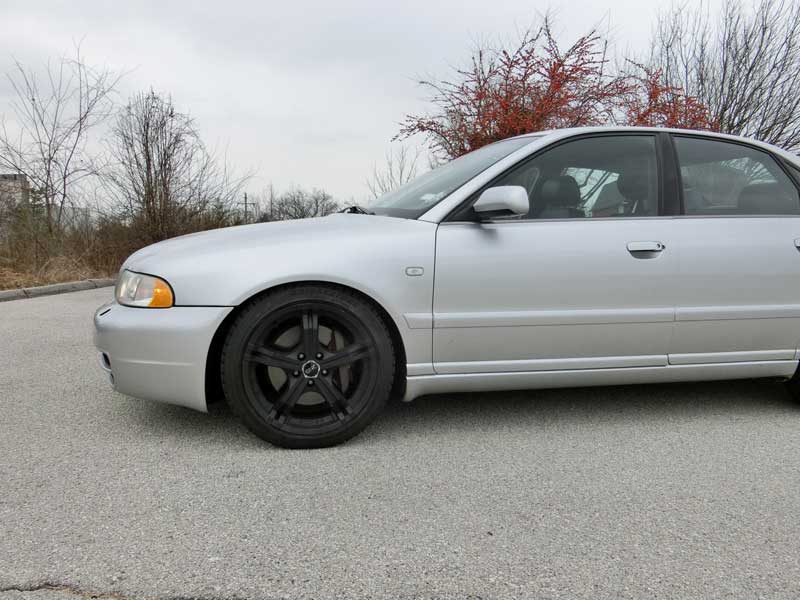 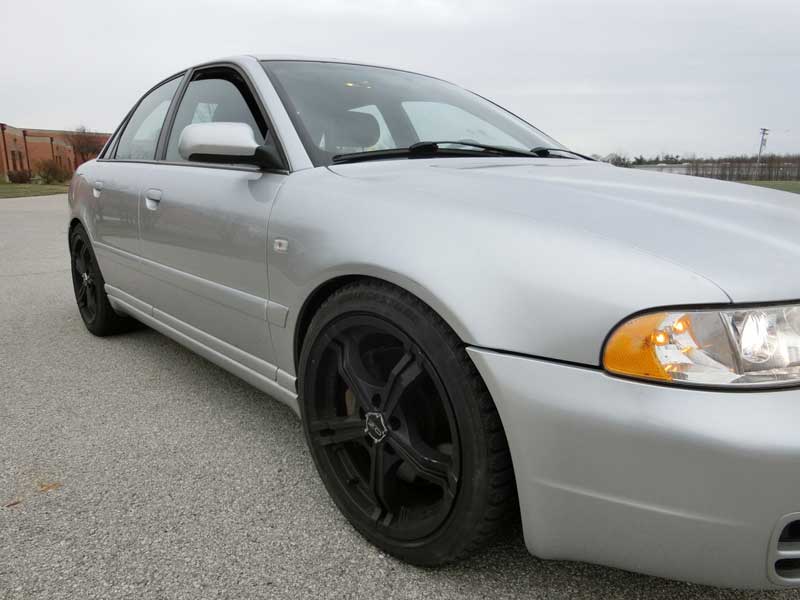 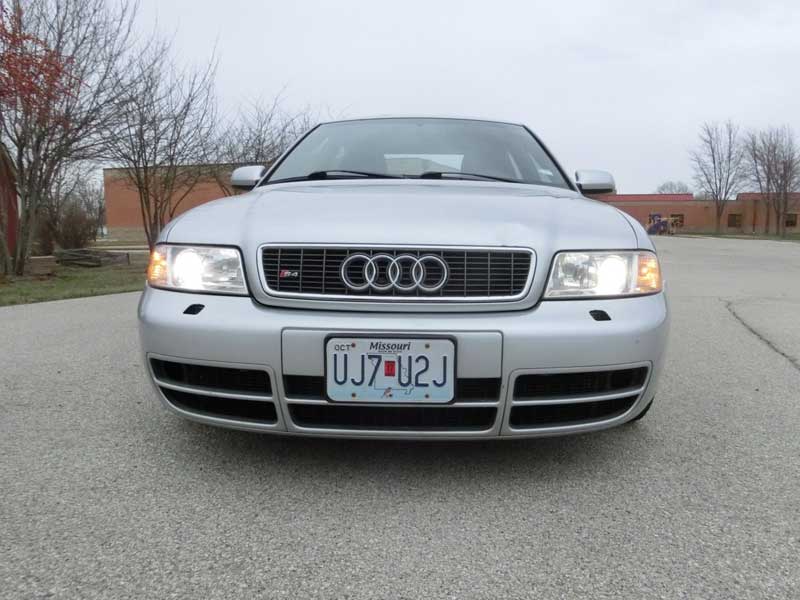 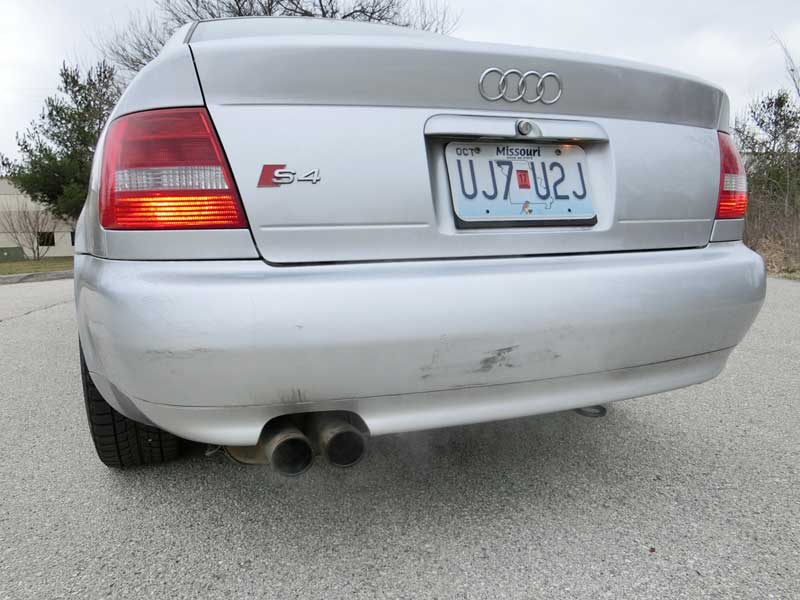 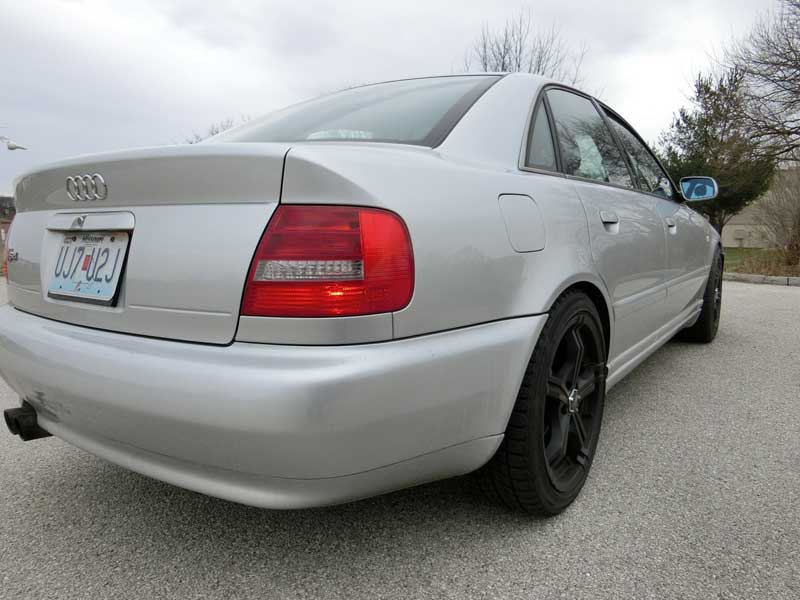 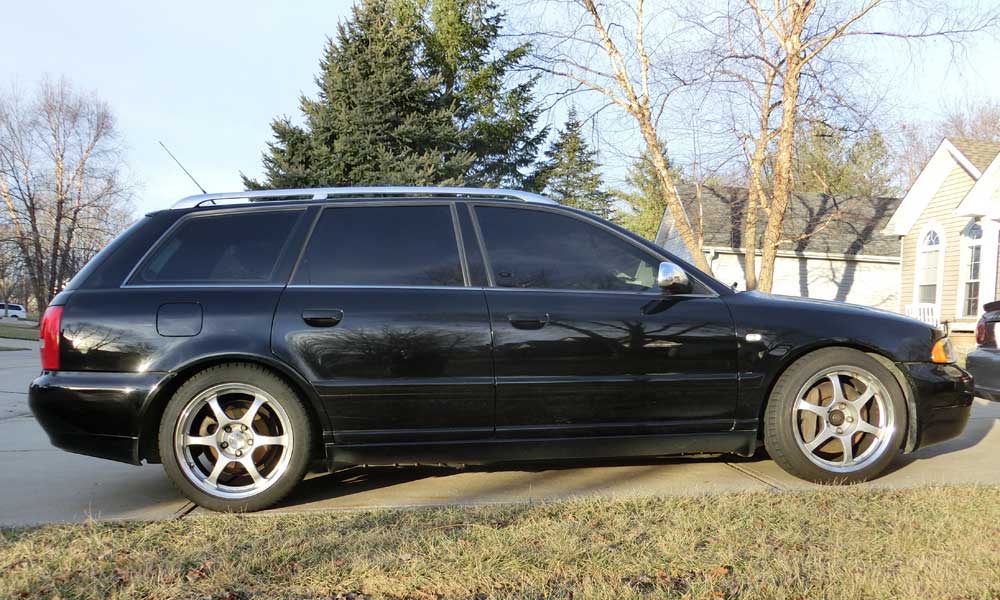 Getting started with the front suspension component swap I knew this was going to be a bit of work, but fairly straight forward.  First the driver’s side coilover was removed from the Sedan. 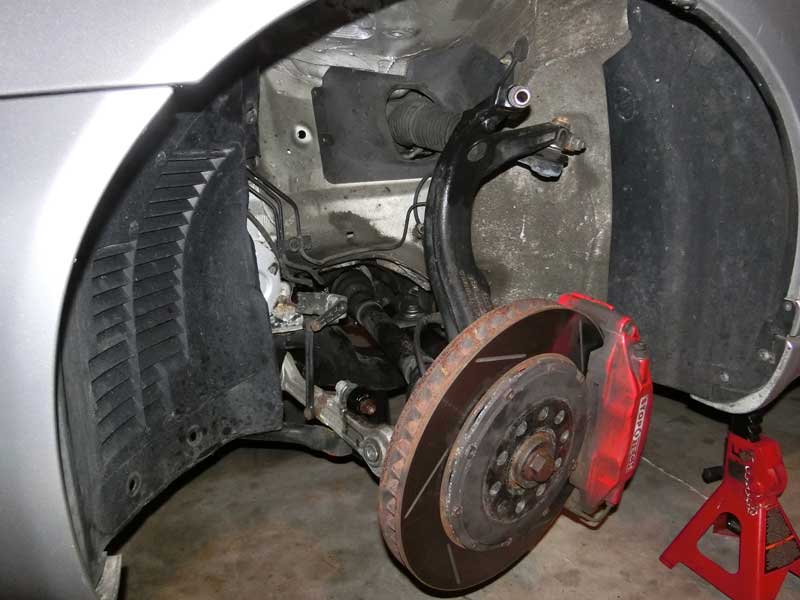 Then the same component on the Avant was removed. 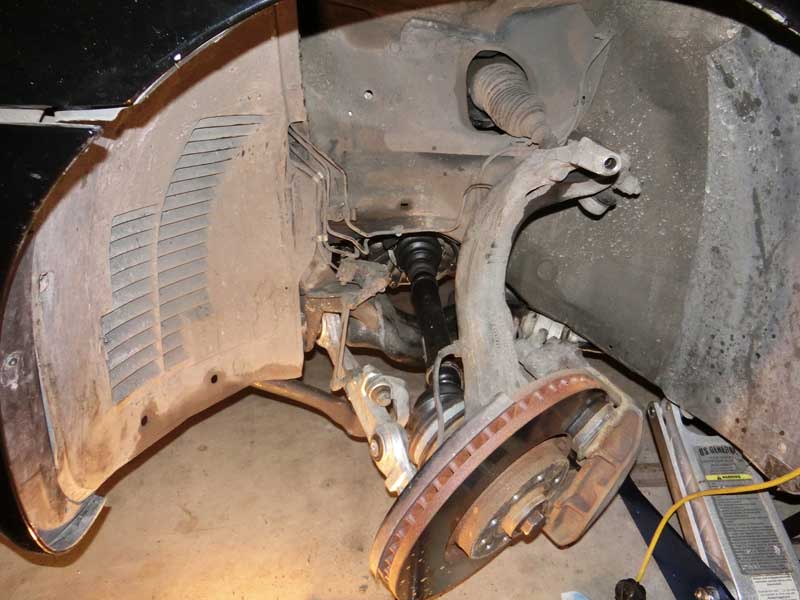 As it turns out both cars have Stern upper controls arms, saving me some effort in what may have been a swap of upper control arms.  With both coilovers removed I was ready to re-install them in their new homes.

With the Motorsports it becomes necessary to partially remove the windshield washer tank so that the line to the oil reservoir for the coilover can be snaked up into the engine compartment.  Unfortunately removing the washer tank on the Avant was not as easy as I was expecting.  Someone had routed the wires to the lower tank pump around the bracket that holds the horn in place.  Simply lowering the washer tank was not happening.  I thought I might be able to remove the end of the electrical connector, but that was not to be, at some point someone had broken the tab that releases the connector. 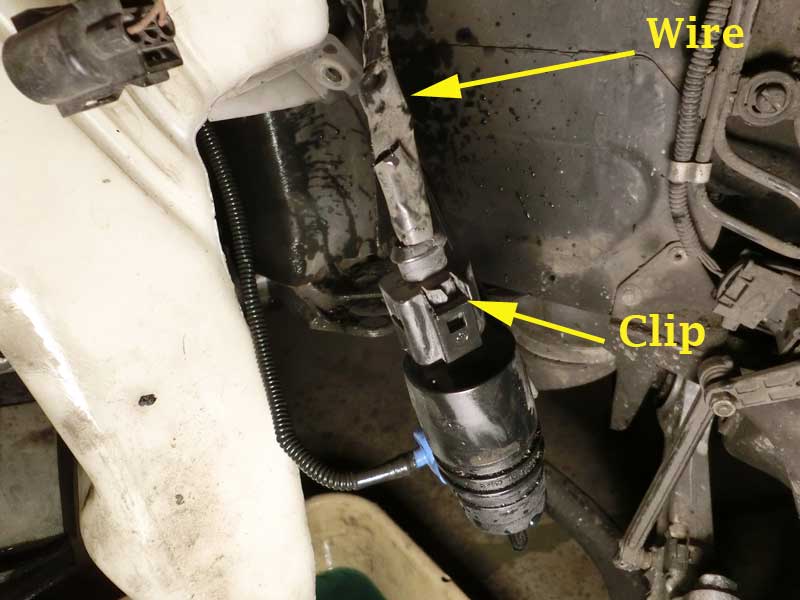 The next option was to drain out the washer fluid so I could then remove the pump and get some better leverage to pop the connector apart.  Eventually this was successful and the Motorsport coilover was in place on the Avant, along with the 034 front swaybar end link. 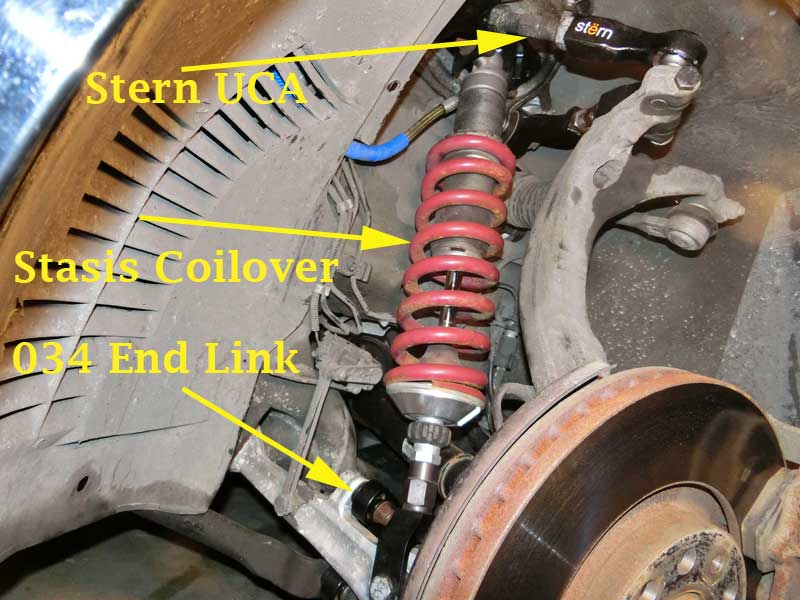 Today’s car picture looks very similar to yesterday, the car has not moved yet. 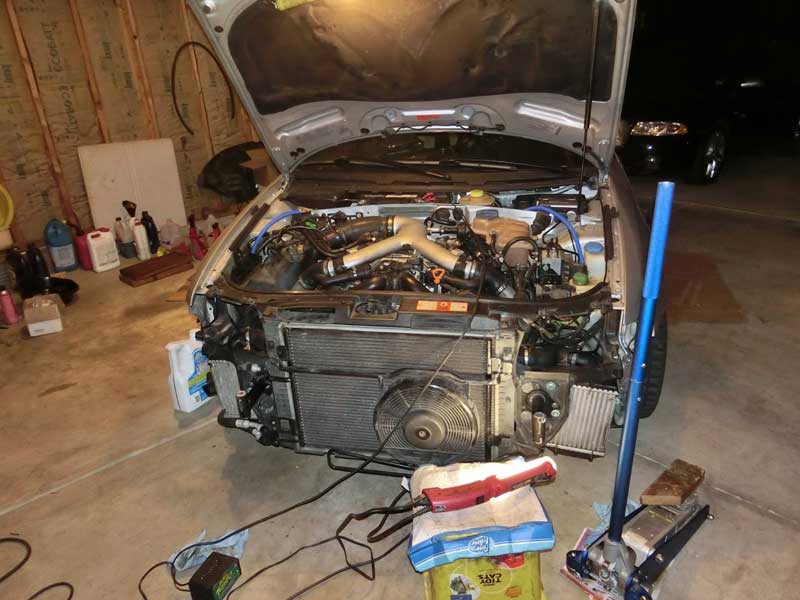 Getting the clutch bled was my first priority and I decided to go at it in a different way.  I have the hose line and adapter from a Motive Power Bleeder which I attached to my air compressor.  I put a fluid collection bottle onto the slave cylinder nipple, coming at it from the driver side wheel well.  This was also a tricky arrangement, but had more space to operate in than I was having coming at the slave cylinder from the engine compartment by the coolant reservoir.

With about 15 psi of air into the blake fluid reservoir I was able to get the last of the air out of the slave cylinder line and now the clutch pedal is operating correctly.

I was then ready to start it up.  It began o.k., but I noticed an odd whining noise from the engine compartment that sounded like a belt rubbing on something.  I shut it down for a visual inspection but could not find anything apparently wrong with the accessory belt.  I started it back up and moved to the engine compartment to try and isolate the location of the sound.  It seemed to be coming from passenger side timing belt cover.  I was not looking forward to pulling the front of the car off.  With a closer inspection I found that the timing belt cover was in fact being rubbed, causing the noise.  I was able to loosen the cover and pull it out slightly and that eliminated the rubbing.  At the same time I found that I was getting a number of misfires on cylinder one.

The first effort was to adjust the timing belt cover so that it would be fixed in place and not rubbing.  That took a little while but was fixed, at which point I moved on to trying to diagnose the misfire.  I began by inspecting the spark plug, or rather as I started to do that I noticed a good bit of liquid condensation on the bottom side of the coil pack.  Hmm, smells like gas, a possible leak around the spark plug?  It turned out that the spark plug was not fully seated.  Thinking back to several months prior when I had removed this motor from the Nogaro I recall that I had checked the condition of the spark plugs, but had not fully inserted them back in!  Doh!

So around I went torquing all of the spark plugs to 25 NM and it started up and idled well.  I’ve not rechecked with VCDS, I’d had enough for one day, but happily things are progressing towards getting this car back on the road.