I next thought that perhaps with the sensor plumbed in prior to the N75 valve that maybe some pressure was being bled off by the N75 valve.  To eliminate that possibility I ran one compressor line to the N75 and the other to the pressure sensor.  Still the pressure from the Dwyer sensor at the turbo was less that the pre-TB pressure.

That led me to question if the stock MAP sensor is reading correctly.  I’ve got two extra MAP sensors in the toolbox, one new and the other used.  I thought that if I hooked the sensors up to an air compressor and ran the pressure up to 20 psi I could log with VCDS the boost pressure being reported to the ECU.

I hooked up the contraption below to record these MAP sensor readings: 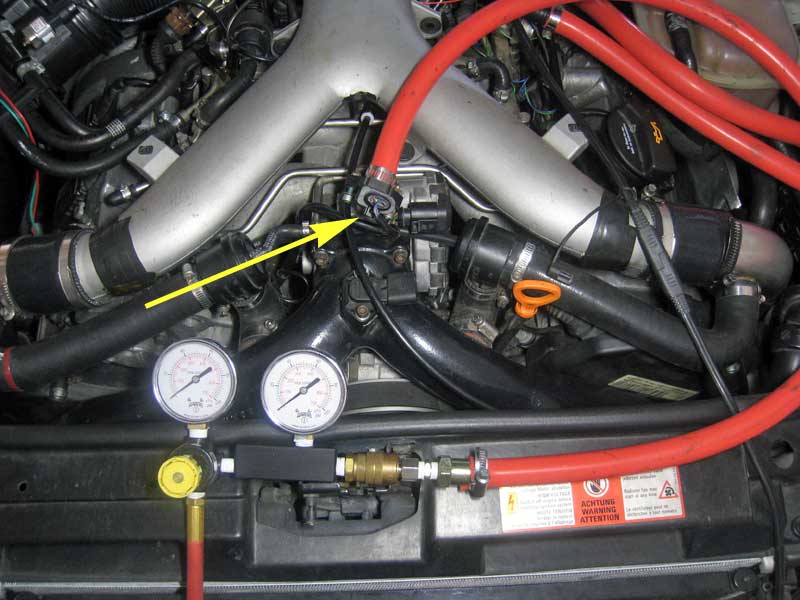 This is a pressure regulator normally used to perform leak down testing running into the MAP sensor which is electrically connected to the car.

As I turned the pressure up VCDS reported the increase in millbars until the reading reached 1300 mbar and then it stopped rising.  I thought perhaps without the engine running there wasn’t enough juice going to the sensor, so I started the car and tried again.  This time pressure stopped at 1390 mbar.

Apparently the car is limited on how much boost it will read if the boost is not being developed as expected.  So much for this idea, I’ll need to log the different MAP sensors on the road and see how they compare.