Recently it has seemed to me that a large percentage of dyno results that have been made public are developed on a DynoJet brand dynamometer.   I like the consistency that a DynoJet has with the measured wheel horsepower and this is the brand of dyno I seek out when I look for a place to have my S4 dyno’d. 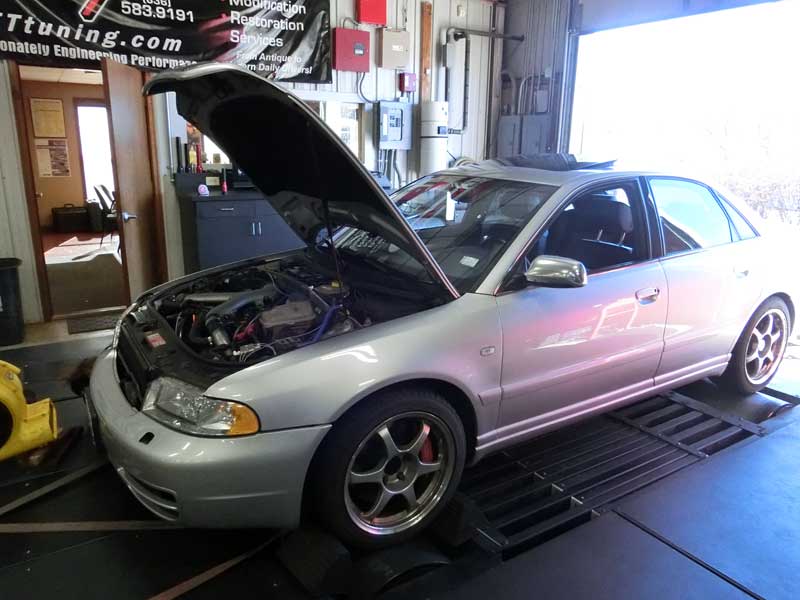 The frequency that I have put my car on a DynoJet, along with the abundance of street logs that I have recorded, provides a good collection of results to use to compare the two methods for estimating vehicle wheel horsepower.

The summary below shows the setup that my S4 had and the DynoJet generated whp and the road acceleration derived whp.  The last column to the right shows the amount of change between the DynoJet and road measurement.

From these seven data points the average change from DynoJet to street is about 6%.

Another source of wheel horsepower also derived from street data is the calculation made by the ECUxPlot program.  The application appears to take into account similar variables, but I suspect something may have been left out, or is assumed to have less influence, as compared to the assumptions I make in my calculations.

Shown below is a series of pulls made by my car with the calculated wheel horsepower displayed:

These same logs when evaluated using my calculations produce the following:

It may not be immediately clear, but the calculations I have made are greater than the results calculated by ECUxPlot.  Out of the four data points, ECUxPlot reports a peak wheel horsepower value about 4.5% less than my calculation.

So which is more accurate?  I’m not sure, I have found that my calculations more closely match the results that were recorded on a Mustang Dynamometer but who’s to say how accurate that dyno was.

An outcome of this comparison is, if it is assumed that the commonly used ECUxPlot is more accurate, the difference between DynoJet recorded wheel horsepower and that from ECUxPlot would be even greater than what I have calculated.

Using ECUxPlot’s calculations, the results are on average 9.2% less than that reported by the DynoJet.

I am reasonably confident that the street measured results are more accurate than the DynoJet values.  The DynoJet would seem to read above truth by somewhere from 6% to 9.2%.