Today I continued the effort of putting things back together.   As this is a repair and replace effort going on in conjunction with the buttoning up it’s taking a while longer than it normally would.

After the passenger side axle went in I also installed the new wheel well liner for that side.    I was also cleaning oil and dirt residue off the intercooler pipes and hoses so something like re-installing the IC’s entailed more than simply re-install the part.

I was pleased to observe that the accessory belt contained an Audi logo, I was concerned I’d find a no-name brand.  I had to hunt around for a little while in my spare nuts and bolts box to find a bolt to hold the AC compressor in place – a previous owner had chosen to install the part only using two of the three bolts.  I could see skipping a fastener or to on the wheel well liner, but not on something like the AC compressor. 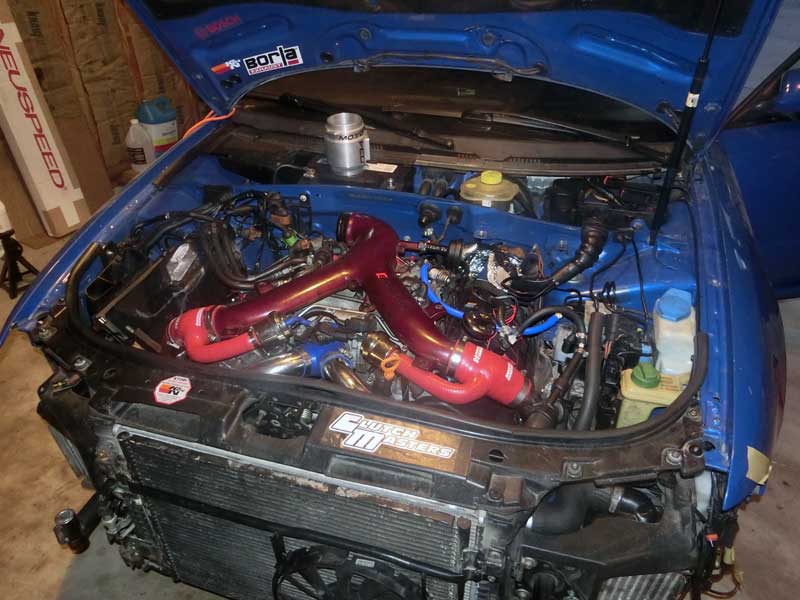 I’m doing away with the K&N cone filter and BMW MAF housing, in exchange for and EPL MAF housing, adorned with 034 Motorsport stickers of all things, that was in the Nogaro’s trunk.  I’ll be reverting back to the stock airbox.

Another puzzling thing I found was that a prior owner had removed the bracket that the wiring harness attaches to beneath the coolant reservoir.  Without the bracket the harness hangs down closer to the exhaust manifold, not something I’m fond of, so I wrapped the harness in aluminum foil and tied it up underneath the the brackets for the reservoir so it has some protection from the heat below.

I still need to make up some joiner pipes for the exhaust, but I’m getting close to starting this S4 back and, and begin troubleshooting any remaining issues.