The Nogaro showed up with a catless exhaust setup, not something I was thrilled with, so I began looking into options to get a different setup on the car.

Another local S4 owner has a ‘project’ car they recently acquired from an owner who had made questionable decisions to it as well. The exhaust on that car had catalytic converters, so we made a swap.

What arrived was a one piece exhaust, yep solid pipe all the way from the turbo flange to the monster tip.  Not a conducive setup for engine installs on jackstands.  I took a sawzall to the pipe and removed the OEM couplers that had been welded in place connecting the stock downpipes (with exhaust dumps!) to the frankenpipe.

I had to marvel at the size of the muffler on this mash up of pieces.

I’ll admit to being the driver of a unfitting exhaust tip for a Audi B5 S4.  The 034 single pipe has a fairly large exhaust tip, I’ve not brought myself to pony up the money to get the dual tip setup, yet.  But what I’ve got on my Silver S4 is nothing like this behemoth.

Maybe it’s just the round muffler that exaggerates the absurdity of this exhaust tip.

Then again, maybe the tip is absurdly large.

While moving some wiring around I managed to break one of the arms of the spider hose.  On my Silver S4 I’d converted over to a silicone hose setup and had some leftover hose on hand, so I did a repair and added in a silicone arm to the spider hose.

Another thing I did was ‘undo’ the N249 delete, reinstalling the parts to operate that system.

The prior owner had also tapped the boost gauge into the FPR line, not my first choice given the importance of maintaining correct fuel pressure and my desire not to jeopardize that pressure.  So I added a port on the N249 hoses for the Boost gauge.

Thus far I’ve spent all of my time focused on attending to components accesible from the vehicle exterior, so I snapped a few photos of the interior which is in pretty decent shape.  Not all that surprising since the car only has 92k on the odometer, low for a B5 S4. 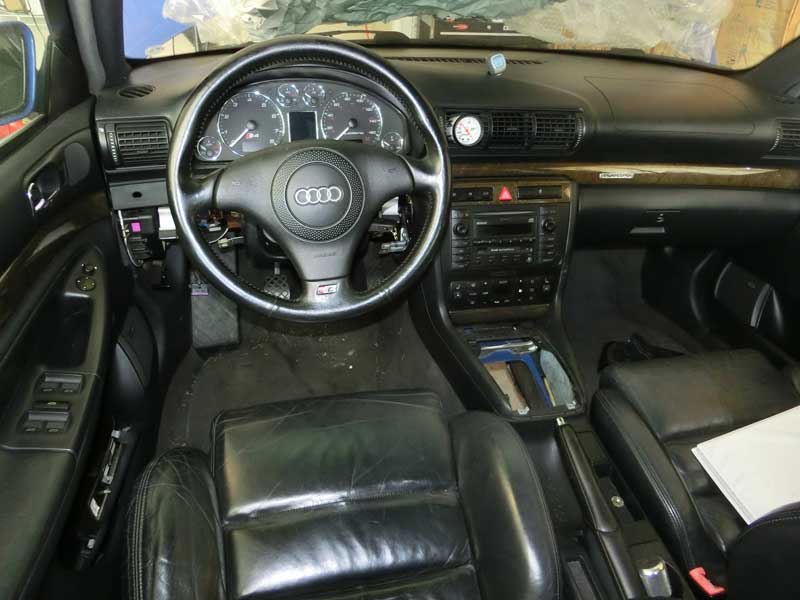 The car had a Podi steering column gauge pod in the trunk, that will become the home to the boost gauge that was poorly placed in the center vent. 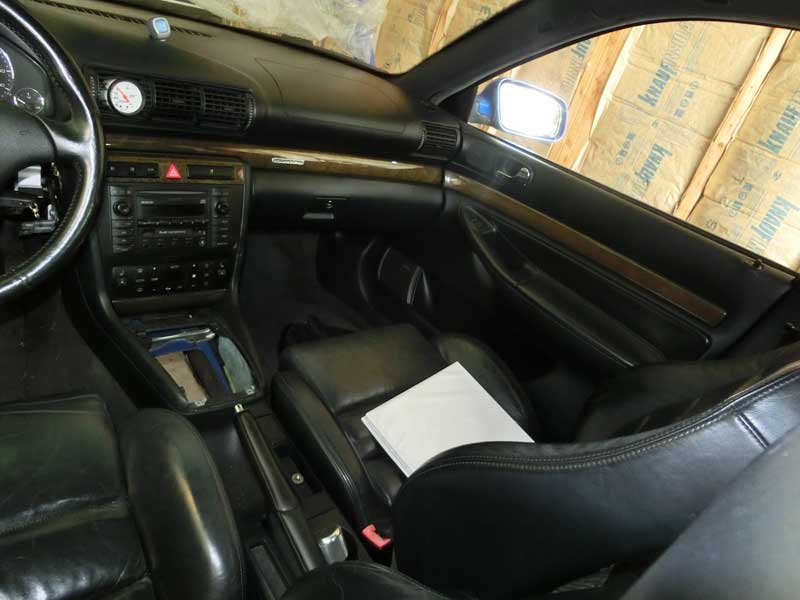 The car was delivered with a new battery, so new the old one is still on the floor of the back.