I was anxious to get an idea of what was to come of the car so I sent some pictures over to a collision repair shop to see if they could tell me what they thought the outcome would be.  They said that when the airbags deploy it is around $5k to replace and rearm them.  They thought that with the additional damage the vehicle would be declared a loss.

I started pulling some stuff out of the engine compartment so I could get a better look at the frame, looking at the front the frame rails that the engine sits between I could see they were slightly bent, which was not good.  An option that I considered pursuing was to buy my car back and then use the payoff amount to purchase another used S4.  I could then swap over all my aftermarket parts as well as the motor and anything else I like, that way I could get a higher mileage car cheaply but put a lower mileage motor in it. Once the current car had all the useful parts removed or sold I could then sell the remainder to a salvage yard.  Another thing I could do would be to hang onto the extra motor to rebuild with some better internal components. 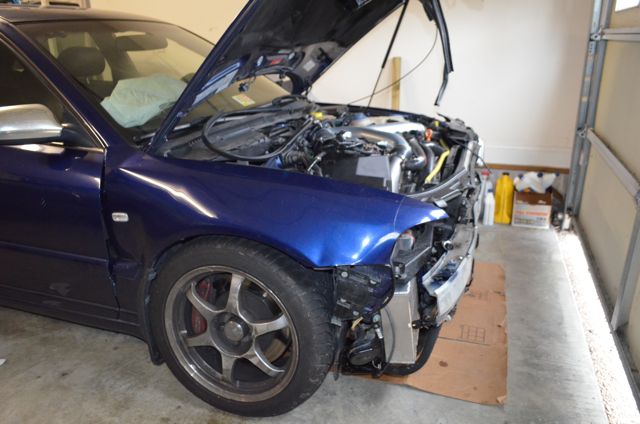 The big unknown was what the insurance company was going to call the vehicles fair market value and what type of salvage bid they’d receive for the car.  Looking at Autotrader and Cars.com there were S4’s with the mileage mine had being sold for 10-13K, but then KBB says the value is around $5-6k.  I was hoping they’d assign a decent market value and the salvage bid come in very low.

Next: Search for a replacement S4