In the last post about the Turbo Concepts turbochargers I mentioned that the temperature rise across the compressor was looking a bit better than what I recorded with some other turbochargers.  To try to simplify the process of making a comparison I’ve chosen to assess the products in the following way.

I chose 5500 rpm as the engine speed at which to compare the temperature rise.  As the chart below illustrates, the rise in temperature is reasonably linear past 4000 rpm, yes there is some slight curvature to the data, but for my purposes this assumption of linearity with engine speed isn’t something that I feel will change the outcome of the comparison.  If I took the reading at 6000 or 6500 rpm the relative differences between products would still be like that made at 5500 rpm.

It is clear that the temperature delta at the start will exist throughout, though the magnitude does decrease some in the example below.  I have chosen some datasets, from many, that have starting deltas in the same ballpark, around 20-30 degF, and by using at least four samples and then averaging them I hope to show a ‘typical’ case comparison. 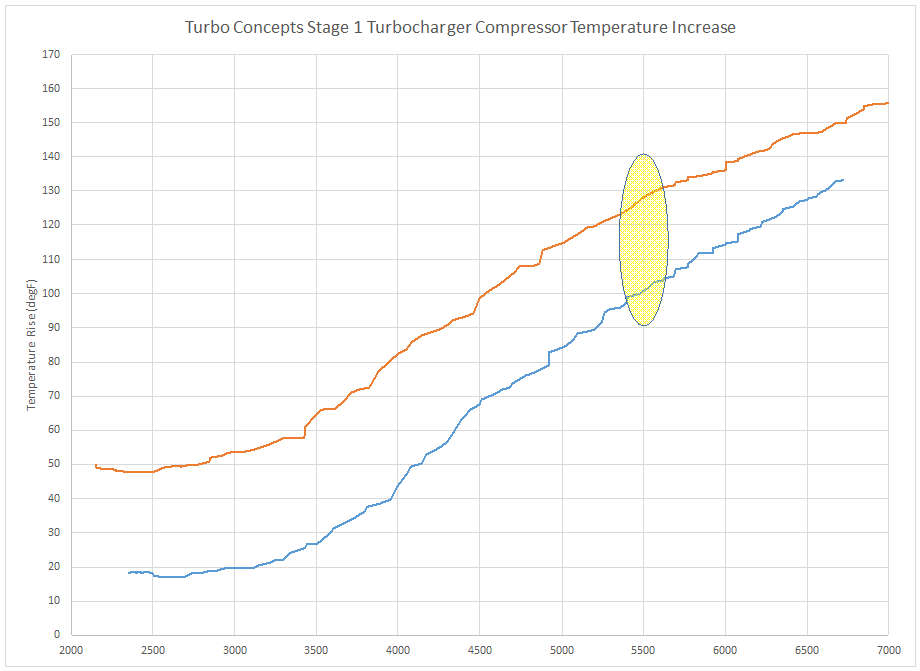 Below is how the BW K04’s, FT F21’s, TTE 550’s and TC Stg1 turbochargers compare.  Again, this is the rise in the temperature through the turbochargers compressor when the turbo’s boost profile is approximately the same and with approximately similar starting delta’s.  The conditions are not exactly the same in each case, which is why there are 4 to 5 samples taken and then averaged for each turbocharger, to give a general idea of how the products compare in this regard.

This lower temperature produced by the TC turbo’s is a good thing, but as I discussed in the earlier post, the intercooler and water-methanol injection come into play before the charge air reaches the engine, resulting in an intake air temperature that is not much different between these products.