The TTE 600 turbocharger has not been one that I’m interested in obtaining due to the RS6 turbine housing that it uses necessitating a different downpipe or flange.  Still, I was curious how it would compare with the TTE 550 model and when I came across a set of dyno sheets from MRC Tuning showing one RS4 with the TTE 550’s and another with the TTE 600’s I decided to match them up.

A quick scan of the product descriptions shows that the TTE 600 is an RS6 K04 based turbo with a larger compressor wheel and some refinements made to the turbine wheel utilizing the RS6 turbine housing.

The TTE 550 is one of the candidates I’m considering and uses the same internals as the 600, (so far as I can tell), but packages them in the RS4 K04 housing, so the smaller K04 turbine housing.

It would appear the the main difference is the turbine housing, RS6 vs RS4.

I pulled some data from the dyno charts and after converting them to post-drivetrain loss at the wheels HP and Ft-Lb units I plotted them out.

Here’s how they compare: 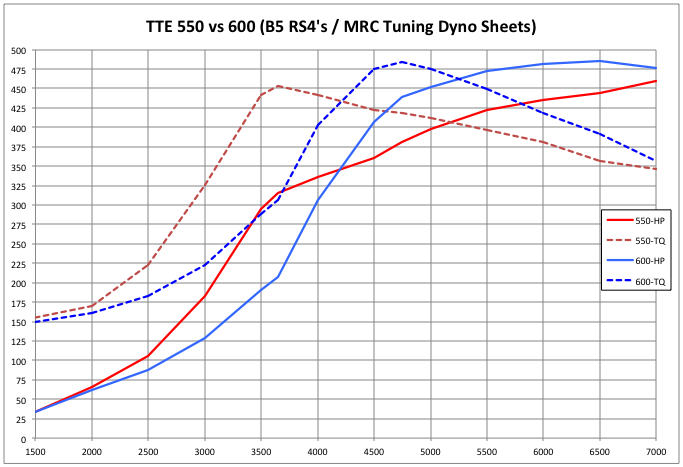 The results are generally what one would expect to see given the physical differences in the turbochargers.  The smaller 550 generates torque more quickly and the larger 600 is able to develop additional power at upper engine speeds.

The results shown here have reinforced my belief that the TTE 550 is probably the best product from the TTE lineup to achieve the goals I have for my S4.