As frequent readers may have picked up on, I usually acquire parts myself, or borrow them from other enthusiasts, and occasionally will have a vendor send me a product, all for testing on the flowbench.

The BMW inlet debacle started off with a request from FrankenTurbo to flow test a set of stock turbo inlets for a twin turbo BMW motor. 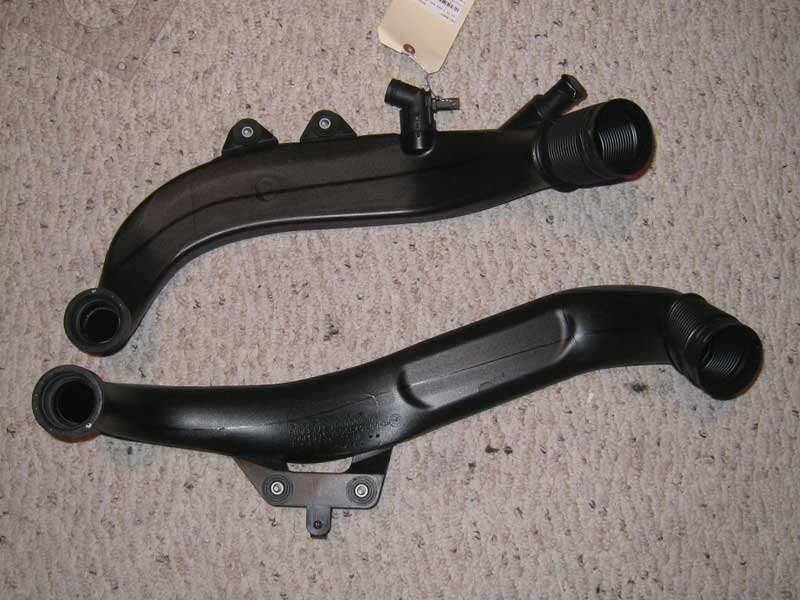 The BMW stock inlet testing went uneventfully.  As usual I started off by placing a calibration plate on the flowbench to ensure the readings I would take of the test article would be accurate, within the tolerance of the digital manometer that I use.  I had an adapter plate already made up that fit well to the end of the BMW pipe and with the addition of some Play-Doh had an air tight seal at the junction of the pipe and plate.  I operated the flowbench as an intake, air being sucked into the pipe.

I passed along the results, which were a bit surprising, with one pipe flow significantly more than the other.  Upon further inspection of the two pipes it appears the one has a tight bend just prior to the outlet, the likely source of most of the difference.

At that point I figured I was done with the testing, but someone on a BMW forum caught sight of my results and posted a link to the information.  Shortly thereafter I was contacted by a maker of aftermarket parts for the BMW, MPP, asking if I would be interested in performing a similar test on their alternative inlets.  I was happy to help out and a few days later a box with the MPP inlets arrived.

After assembling the MPP inlets I found another adapter plate that was suitable for attaching to the silicone reducer elbow that is located at one end of the MPP pipe.

A cal plate was run on the bench and then I attached the MMP pipes to see how they’d perform.

No surprise the MMP pipes flowed more air than the stock pipes.  I was a bit surprised by the minimal difference between the two MMP pipes.  The shorter of the two is nothing but a silicone elbow reducer attached to a short run of pipe whereas the other is quite a bit longer with an additional 180 degree bend.

It was not much longer before I was contacted by another vendor and asked if I’d be willing to flow test the VTT inlets.  Again I agreed and the VTT inlets were on hand a couple of days later.

With the VTT inlets I needed to find another adapter plate because the section of hose that attached to the adapter plate was slightly larger in diameter.

After verifying the calibration of the bench I attached the VTT inlet pipes and applied the Play-Doh around the pipe and plate junction.

Once again the aftermarket inlet pipes outflowed the stock inlets.

All three sets of pipes have some very different designs each possessing features that benefit, and hinder, the performance versus the other products.

Here are all six pipes compared together:

This outcome is not something I would have predicted based upon the casual look I gave the inlets while attaching them to the flow bench.  Only after running the flow tests and then trying to understand the results did some theories arise to explain the outcome.

Of the most notable differences, these are my theories about what is driving them.

All of these pipes are going to feed into another pipe or part, and the diameter of the junction where that transition occurs will have a say in how much pressure drop occurs before the inlet air reaches the compressor wheel.  Taking these flow numbers alone, outside of the bigger picture, could possibly lead to placing too much value on apparently significant differences that in the end are minor.

Completely unrelated, but for the curious, here’s some testing I did with the B5 S4 stock Y-Pipe and K03 turbo inlets.  For those not inclined to go further, the S4 inlet setup, a y-pipe into dual inlet pipes, flowed just over 250 CFM at 10″ of H2O,