This morning I was able to log a 3rd gear pull that was not quite to redline, but far enough to show how important intercoolers are on this car.  The compressor outlet temperature (COT) really climbs during a full load pull but the intake temperatures (IAT) remain close to the starting values.  Temperature is on the second y-axis (right-hand side of chart). 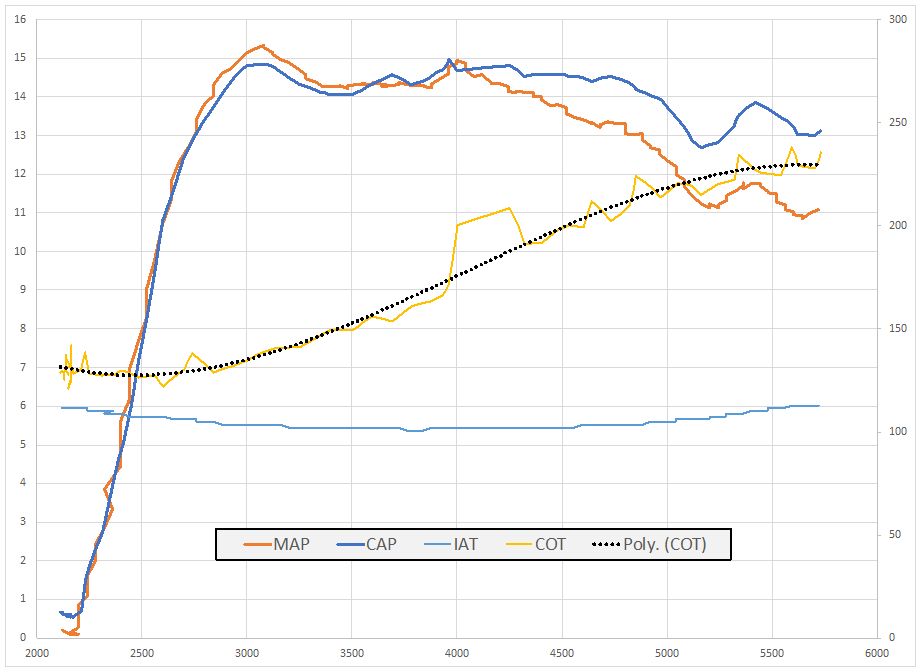 In response to a question about the compressor outlet pressure exceeding the manifold pressure (from about 2700-3500 rpm) I started investigating potential causes.  A couple candidates that came to mind were conversion errors when moving from millbar absolute pressure to gauge pressure psi and differences in sensor calibration and response time.

Another possible cause was brought to my attention when someone asked about the placement of the MAP sensor, which on the S4 is typically located at the throttle body boot, or the juncture of the two up-pipes on a one piece bipipe equipped car such as mine. In both cases the sensor is located prior to the throttle plate.  It occurred to me that when the throttle plate closes, restricting airflow into the engine, this would probably create a high pressure region on the side of the throttle plate that the MAP sensor is located on.  Additionally, when the ECU works to reduce air into the engine, lowering the turbocharger wastegate duty cycle (wgdc) would cause the compressor outlet pressure to decrease.  I thought about where the anomaly was occurring, just as the boost was peaking on initial ramp up, and it seemed plausible that at that point the ECU would be closing the throttle plate slightly, as well as dropping wgdc, in order to transition from boost rise, to level boost pressure.  That would bring into play both potential sources of the pressure disparity.

I added Throttle Plate Angle and N75 Duty Cycle to the chart with the MAP and CAP pressures to see if this theory held up.  Each has a value measured as a percentage, which is shown on the scale on the right side of the chart. 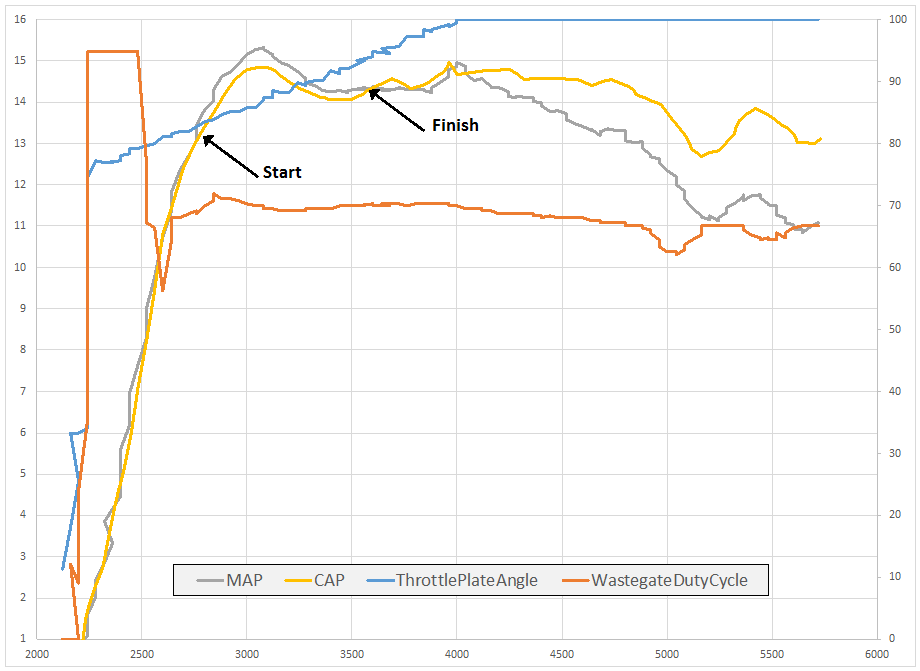 The wastegate duty cycle does come down, but that occurs prior to the boost differential reverse readings.  Interestingly, later during this pull, around 5000 rpm, the wgdc dips, and approximately 200 rpm later the pressure values dip as well.  The delay from the time the signal is sent to the time the outcome is achieved may be part of the cause, possibly as the wgdc drops rapidly during the transition from boost rise to level boost the impact is not seen right away.

At this point I cannot provide any explanation with confidence, I’ll explore some of the other potential causes as well as review future logs for recurrences of this anomaly.