With my recently delivered AMD intercoolers on hand (shout out to Jason at AMD for setting me up with this rare set of his intercoolers) I made some data runs to compare them with the Audi B5 S4 stock intercoolers utilizing the same fixed wastegate duty cycle tune on my FrankenTurbo F4H-BT setup.  Ambient temperatures were close to being the same; 68F on the stock IC day and 60F on the AMD IC day.  Neither intercooler was aided by water injection. 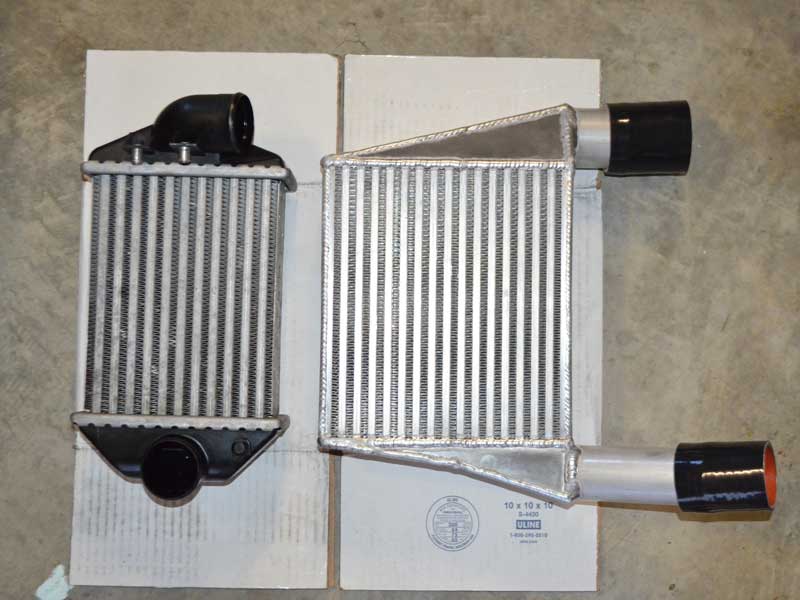 The fact that water injection was not used is important to note because Jason made clear to me prior to the purchase that his intercoolers are optimized for large turbo, high horsepower setups that are using water/methanol injection where minimal pressure loss is critical.  Just how well these intercoolers perform in that regard is evident by their first place position on the intercooler face-off rankings for flow.  This is what is called expectation management – I should not be looking for outstanding temperature control like ER’s provide.  By not using w/m injection I was purposefully handicapping the AMD IC’s, I was also operating in a boost regime that was not what these are targeted at, a 21 psi flatline to redline.

Results of the data collection are shown in the charts below.  The first chart illustrates the additional boost pressure that is realized at the intake manifold due to the reduction in pressure drop that the AMD intercoolers provide.  Because the tune was operating at a fixed wastegate duty cycle any changes in boost pressure are a product of factors outside of the ECU manipulating boost via the N75 valve.

It should be pointed out that these two products are as far apart on the flow chart as any two intercoolers that I have tested, and therefore these results are illustrating an extreme case.  Two more equally matched intercoolers, such as ER and AWE, would not be expected to show such a significant difference.

The chart below is the calculated wheel TQ based upon vehicle acceleration for each intercooler setup. 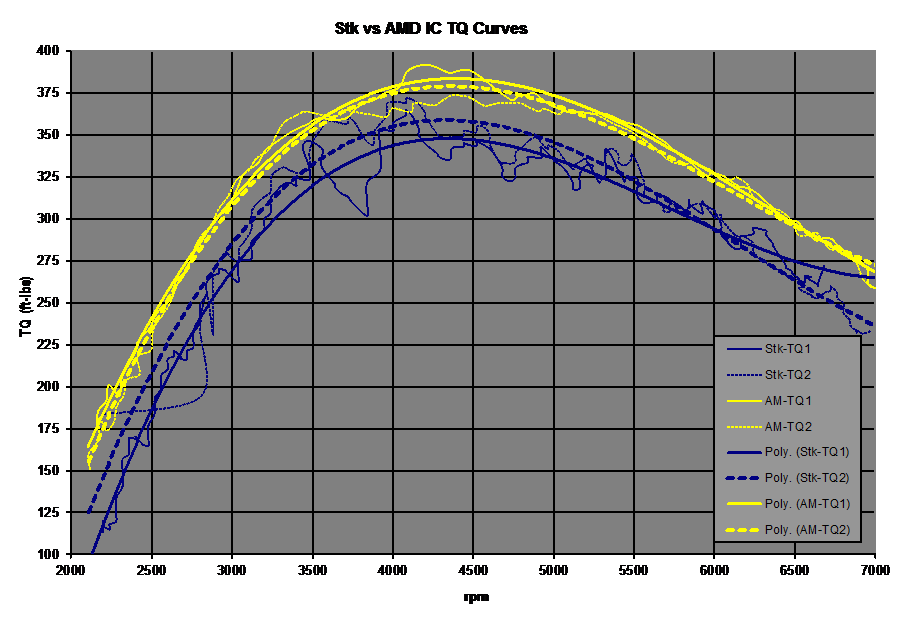 Finally, a comparison of the acceleration rate of the S4 when equipped with the two different intercoolers.

The trend line has been added to the two charts above to help give a sense of the scale of difference between the two intercoolers on these tests.

It doesn’t come as much of a surprise that the manifold boost pressure is higher when using a better flowing intercooler.  The degree of improvement in wheel torque and acceleration is significant, especially in light of the relatively low boost pressure that the tests were performed at.  Even though the intake air temperatures were fairly similar the improved airflow through the AMD intercooler nets some decent performance gains.

Substituting a high flowing, good cooling intercooler for the S4’s stock IC’s is likely to deliver measurable improvements in performance.