Part of the IC mister kit is a nice indoor/outdoor thermometer. I placed the outdoor sensor into the washer fluid reservoir when the car was cool. I added three standard size ice cubes to help cool the washer fluid, and to see how much of an affect a few ice cubes would have.

I then took the car out for some running around and logged the temperature at various times during the drive as well as noting the type of driving conditions I was under. After returning home I lifted the hood to allow the car to cool and took temperature readings for several hours. About one hour into this phase of the test I added three more ice cubes to the reservoir to observe the affect.

Temperature readings were taken at various intervals that were not consistent. There was no record of driving speeds, which would have been helpful.

The results of the test have been illustrated in three charts: 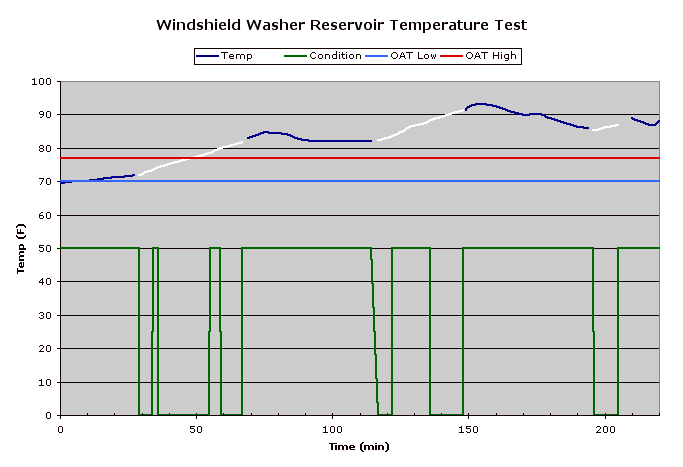 The first chart shows the reservoir temperatures during the driving conditions. The reservoir temperature line changes from blue to white when a transition is made from constant driving conditions to being stopped, or in heavy stop and go traffic where little air is being forced into the engine compartment. The solid green bar running across the chart at the 50-degree mark is indicative of the car moving or stationary. When the line drops to 0 degrees the car is stationary. I also have placed two lines showing the minimum and maximum recorded outside air temperatures that I saw during the drive, as recorded by the car’s temperature gauge. 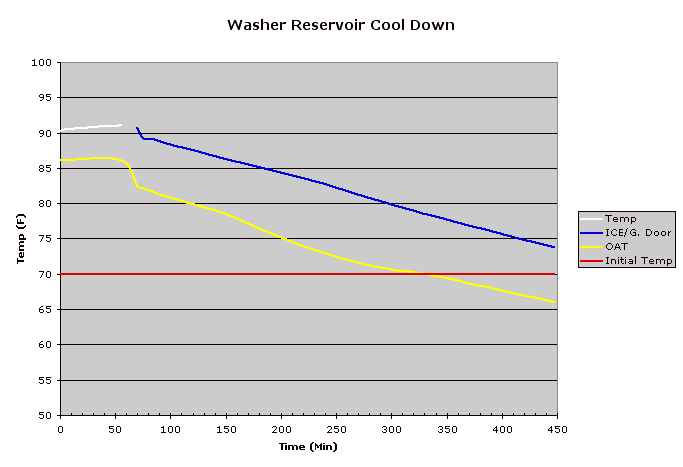 The second chart illustrates how long it takes for the washer reservoir fluid to cool down after having been heated and also the rate of cooling of the outside air as it becomes later in the day and into the evening. After approximately one hour of sitting in my garage with the door closed I opened the garage door to provide additional cooling. At this time I also added three ice cubes to the reservoir to observe the impact on the temperature drop. For reference purposes I put the starting temperature of the reservoir fluid.

The second chart shows that the temperature drop of the reservoir fluid, even with the engine compartment hood open, is a slow process, approximately 0.04 deg/min. The addition of the three ice cubes helps to lower the temperature 0.3 deg/min but the duration of the increased rate of cooling is short. 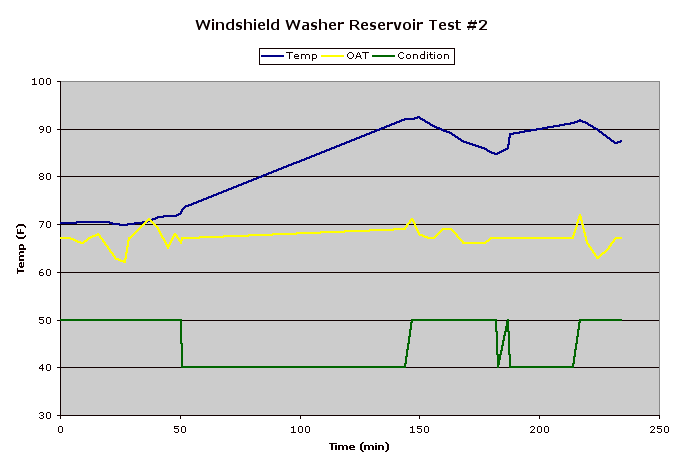 The third chart is more of the same type of thing. I drove for about fifty minutes then let the car sit about an hour and a half. You can see how it is when the car is sitting and no air going under the hood that this is when the temperatures really start to climb. For the first fifty minutes of driving the temperate hardly changes. Once driving again the temperature starts to come down, but nowhere near getting back to the starting levels.

Given the nature of everyday driving conditions, those who are looking to get the most out of an IC mister or W/I system might want to consider installing an additional fluid tank elsewhere in the vehicle where temperatures are not as high as the engine compartment.