Objective: Determine what affect there is on the cooling rate of the engine coolant by replacing the stock after run coolant temperature sensor with a lower temperature switch.

Hypothesis: The stock after run coolant temperature sensor in the S4 is set to activate the after run coolant circulation pump and radiator fan at 234F. An alternative to this sensor is a lower temperature threshold switch that will activate the cooling systems at 198F. With the lower threshold switch the vehicle engine cooling system will almost always continue to run the cooling systems for several minutes after the vehicle is shut off. It is believed that the engine coolant temperature will drop more rapidly and to a lower value with the replacement thermo switch than with the stock switch.

Constraints: Warm up was performed over the same route during an afternoon commute. Ambient temperatures during the commute were similar, but not exactly the same. The distance traveled was the same each time, but the exact driving conditions, speed and time spent at traffic lights, was not replicated exactly. The ambient temperature during cool down was similar throughout the tests, but not exactly the same. By starting the vehicle the coolant was circulated through the engine, this was done to obtain a more accurate reading of the average coolant temperature. While this produced a better representation of the overall coolant temperature value, by starting the motor heat was again being added to the coolant. The affect of doing this on the final result is probably minor, but could have influenced the lowest recorded temperature value. 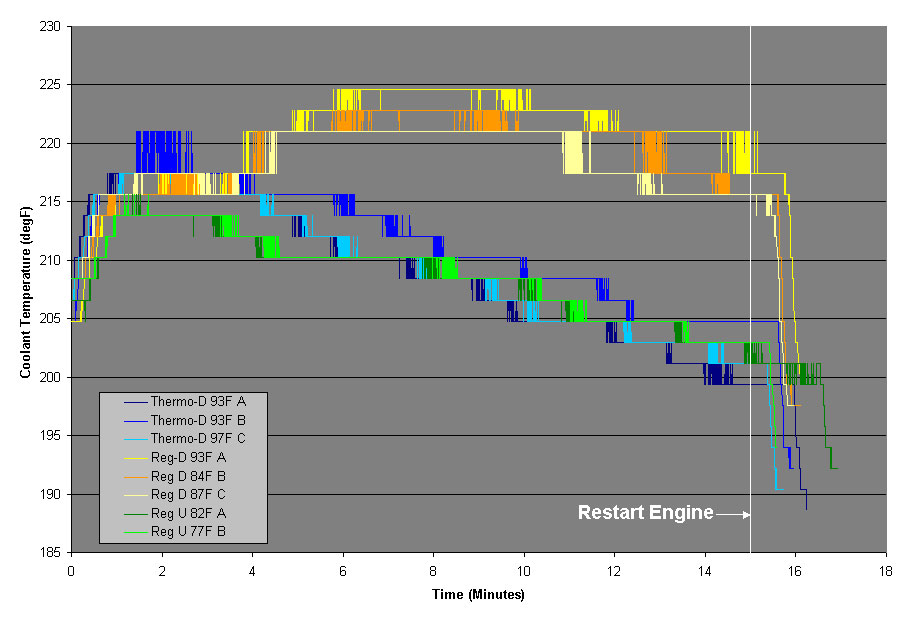 In both cases with the stock thermo switch the vehicles after run coolant system did not activate during the cool down period. With the lower threshold switch installed the after run cooling system activated during each test.

The difference in ambient temperatures likely had some affect, though probably minor. The ambient temperature was recorded outside of the garage during the final portion of the drive. Thus it did not reflect the actual air temperature that was in the garage which would have been cooling the engine. The ambient garage air temperature was probably more uniform between the tests. Also not captured was the local wind affect. If wind conditions were significantly different between the tests the cooling air being presented to the engine compartment could have been different enough to possibly affect the results.

On the other hand, the degree of cooling change may not warrant the added burden placed on the vehicle battery and cooling system parts, primarily after run coolant pump. The maximum under hood temperature difference was only 4F, and the final coolant temperature difference 8F. Just by raising the hood it is possible to cool the engine significantly faster.

Additional follow-on test: To gauge the impact of placing a cooling fan above the engine an additional set of tests were run using the stock thermo switch. The hood was raised upon engine shut down and a small fan was positioned to blow cooling air onto the engine. As seen in the chart below, the cooling affect is substantial. During these tests the engine was not restarted, so the actual impact on the overall coolant temperature remains unknown. It is interesting to note that in the case where the low temperature thermo switch was used, labeled Thermo Up1 on the chart, in conjunction with raising the hood that the rate of temperature decrease did not improve appreciably compared with the same low temperature switch and the hood down, Thermo Down. Once more, the affect on the overall coolant temperate is unknown because the vehicle was not restarted. 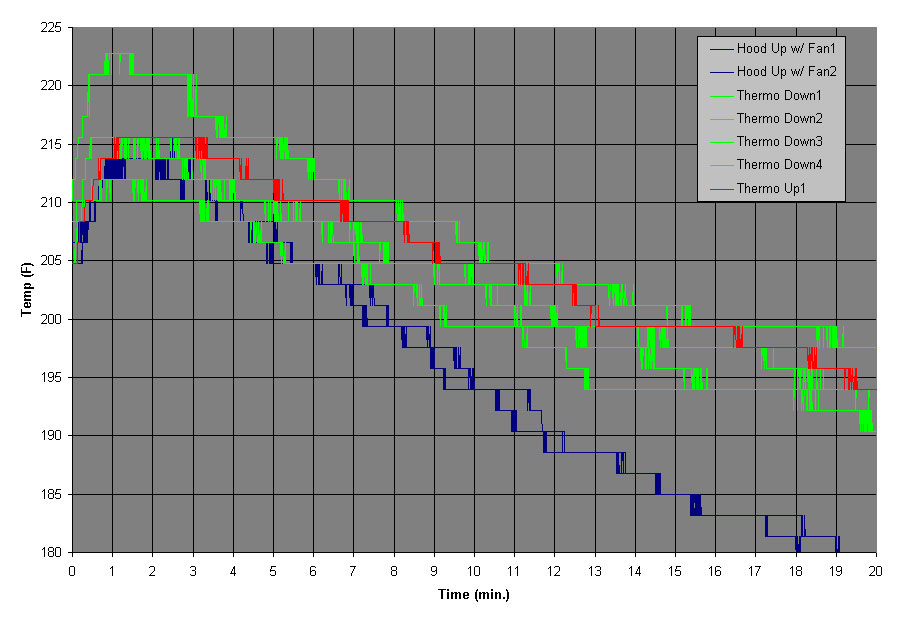